I realize that I’ve blithely assumed that “everybody” knows the Proto-Indo-European backstory but just in case not: it’s conventional to begin with William Jones, a judge in British India in the latter part of the 18th century, who saw similarities between Sanskrit and European languages (the Wikipedia article on *PIE corrects the simple version of the story). In any case, in the 19th century European philologists became obsessed with figuring out the details, and speculatively reconstructing the totally-vanished (because unwritten) *PIE by positing regularities in sound- and grammatical/syntax-shifts (the ‘Laws’ mentioned below). See indo-european.info for much more.

Rooting around on the shelves of word books, I turned up two that I’d missed a few days ago, both strange enough to be worth pondering further. I bought N.E. Collinge’s The Laws of Indo-European because I was sure I’d never see it again (a silly reason to buy something, but one to which I’ve returned again and again…) and because it was one of the most recondite I’d ever encountered. The Amazon blurb: “This book collects all the named laws of Indo-European, presents each in its original form and rationale and then provides an evaluation of all major attacks, revisions and exploitations, along with a full bibliography and index. Complete – thorough – exhaustive.” One reviewer puts it thus:

sets out all the important rules of sound change that any student of comparative Indo-European linguistics should acquaint themselves with. Grimm’s law, Grassman’s law, the law of the palatals, they’re all here. Besides the general laws affecting the major Indo-European languages (Germanic, Sanskrit, and Greek), Collinge also addresses the laws of the Baltic and Slavonic accents. This field is a mess, and it seems that most of the laws covered in the book somehow relate to the accent. An appendix covers minor laws (although some, such as Watkin’s Law, have become major in their ramifications) and major tendencies.

One major downside to Collinge’s presentation is that he fails to give a simple algebraic form of each law suitable for making flashcards. Another complaint, somewhat frequent in the academy, is that Collinge is so attentive in presenting seeming exceptions that he makes certain well-fixed laws appear as if they are undependable when in fact few would dispute them.

Here’s the Table of Contents, which should strike fear into just about any heart:

The Introduction will provide a mild corrective to any overinflation of the reader’s idea of own erudition:

This book is a must own if you have international friends or live in a multi lingual house hold. I satisfy both criteria and at dinners we will always talk etymology and meanings. The internet has nothing on the Red Book, as I call it. I invariably pop it out to settle a linguistic dispute. Very entertaining. I keep it in the kitchen with the cookbooks.

My kind of folk. The Red Book has 180-odd pages of “Index of English Words” which provides entrée to 450 pages of Indo-European roots, each with (as promised) a fascinating discursive entry. Consider the entries for abel and kerd: 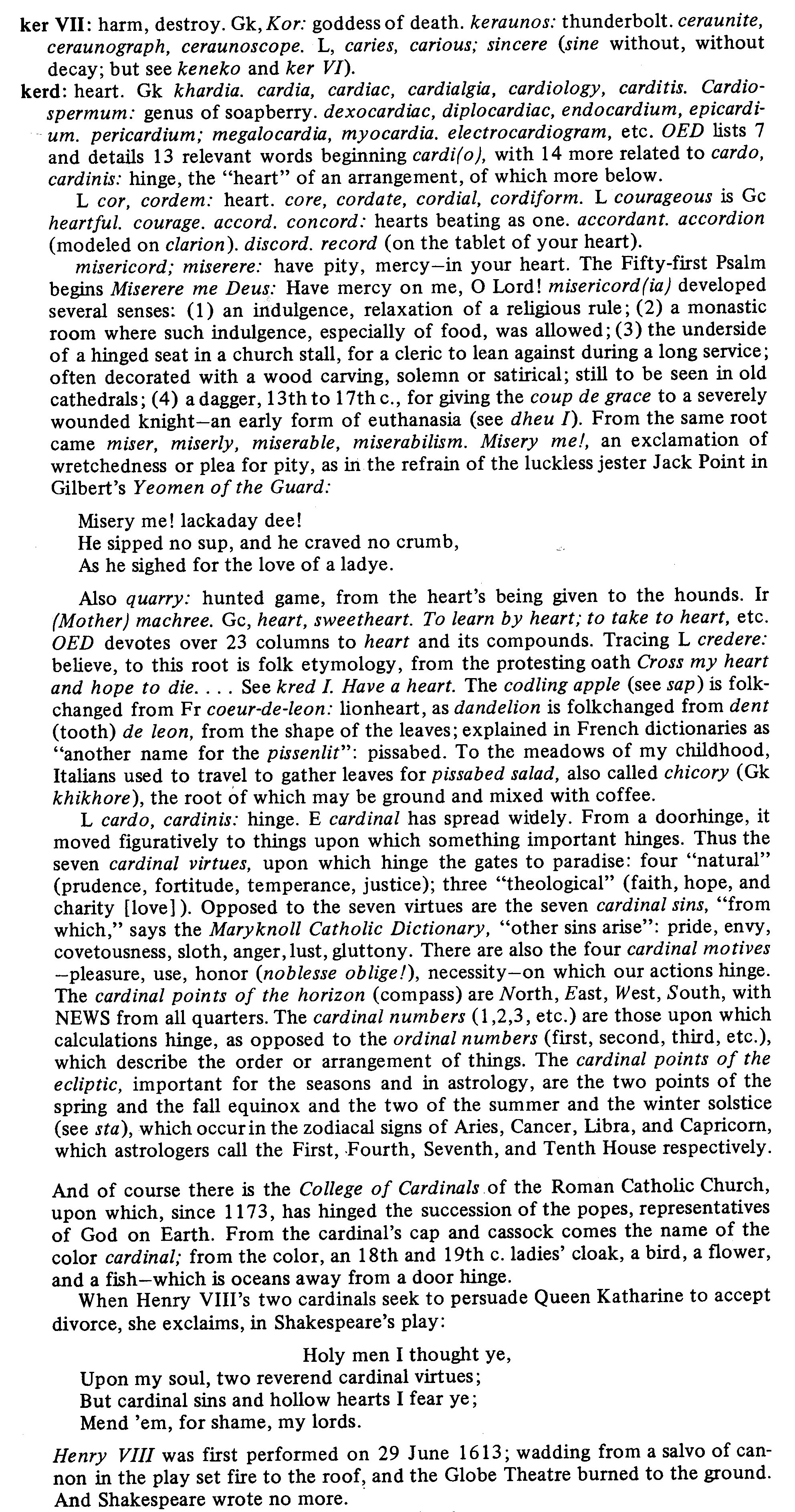