Organizing stuff in the barn always means finding things of Significance that have been hiding for years. Some of them connect to stories and Stories.

This one ended 60 years ago. The tall person was David Lyon, my Chadwick roommate in 1958-59, after which he went to Paris for two years (long story there), before returning to Chadwick for his senior year, which was my first year at Harvard. He’d just been accepted to Harvard himself when he died in a car accident. The old people in the photo are Commander and Mrs. Chadwick, the grandparents of the three at the back and great aunt/uncle to the rest. Mrs. C. was a huge presence in my Chadwick life. 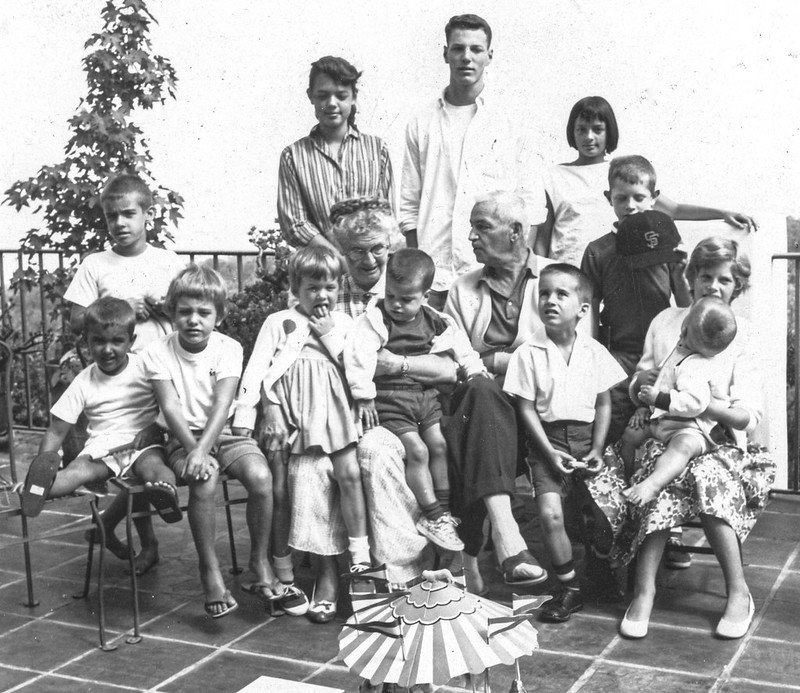 Here we see Betsy’s sister Caroline and her first husband Steve Butterfield, in 1973. Shame it’s not color — Steve’s hair was a magnificent red. He worked for Bolt, Beranek, and Newman when the internet was being born, and was the first person we ever saw use email. When we were at Stanford in the 1979-1980 sabbatical, Steve was at Xerox PARC. He gave me a tour of the Future just when the personal computer was being invented… 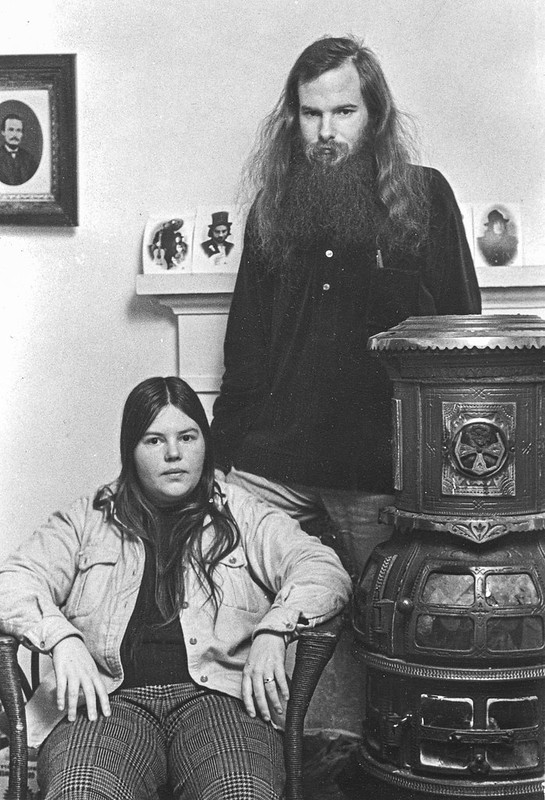 Broot took this one in summer 1963, the young guitarist clipping fingernails. 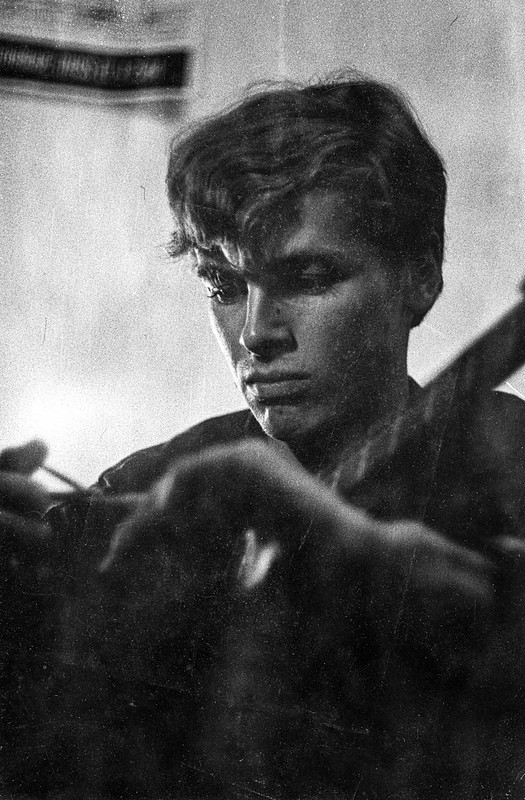 And this is Larry Fredericks, taken sometime in the 1980s. He was a colleague/friend in the first few years at Acadia, an enthusiastic member of CPC/M-L (Communist Party of Canada, Marxist-Leninist). He had a marvelous International Harvester Scout, red in colour, which at one point he traded in for a bronze-hued Impala with electric windows. He took me for a ride on the Big Road, getting it up to 90 or so, and zipped the windows up and down… I said “Lar, what you got here is a Bronze Pig”. He thought that characterization was funny until I wrote a rather mocking song about it. I learned the power of music and lost a friend… but then one day maybe 10 years later he turned up… he was doing something in banking or was it stock-broking in Toronto, and had rented the white Cadillac convertible at the airport. 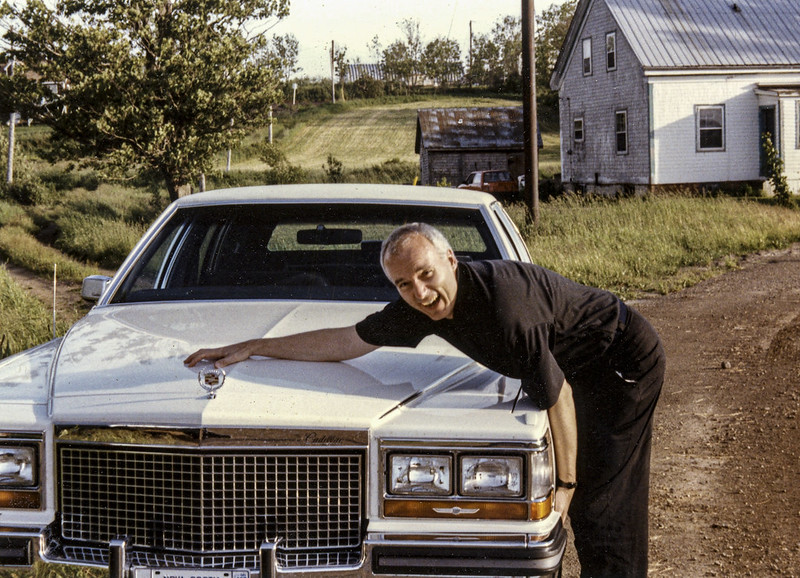 John Koenig’s Dictionary of Obscure Sorrows arrived earlier in the week, and I’ve been enjoying it bit by bit. Here’s an entry that seems to fit with the ambient querilosity of the present moment:

LUMUS: the poignant humanness beneath the spectacle of society

Your culture never really leaves you. Its rhythms are encoded in your heartbeat, its music embedded in the sound of your voice. Its images make up the raw material of your wildest dreams, your deepest fears, even your attempts to rebel against it. So it’s hard not to get swept up in the spectacle of it all, absorbing its stories and values and symbols until you no longer question their importance. It’s as if there’s a circus wheeling around you all the time, so overwhelming that you keep forgetting it’s there.

But there are still moments when you manage to tune out the fanfare—taking time in nature, in solitude, or in some other culture entirely—getting away long enough so that when you return to normal life again, you’re able to look around with fresh eyes, and see how abnormal it really is.

You take in all the scenes and sideshows happening around you. It doesn’t quite feel like reality anymore, more like the worldbuilding of a fantasy novel. You have no idea who came up with this stuff, but you can’t help but be impressed by their tireless dedication to fleshing out even the most mundane details. The vaunted marble halls of politics and business and religion and the arts, each buttressed by its own rules and standards and practices, booming with the echoes of a billion conversations that everyone seems to take so very seriously. Rituals of status and fashion, the mythology of the markets, pop-culture think pieces, and waves upon waves of breaking news. You wonder how you ever managed to get so invested, following all these stock characters, and all their little dramas and debates. Who said what to whom? What does it all mean? What will happen next?

You’re struck by how arbitrary and provisional it all feels. Though it has the weight of reality, you know it could just as easily have been something else. You realize that all of our big ideas and sacred institutions were designed and built by ordinary human beings, soft-bellied mammals, who shiver when they’re cold, dance around when they have to pee, and lash out when they feel powerless. So much of our culture exists because someone was hungry once, someone was bored, someone was afraid, someone wanted to impress a mate, prove something wrong, or leave their kids a better life.

The circus is so big and bright and loud, it’s easy to believe that there’s the real world and you live somewhere outside it. But beneath all these constructed ideals, there is a darker heart of normalcy, a humble humanness, that powers the whole thing. We’re all just people. We go to work and play our roles as best we can, spinning our tales and performing our tricks, but then we take off our makeup and go home, where we carry on with our real lives. None of us really knows what is happening, what we’re doing, where we’re going, or why. Still we carry on, doing what we can to get through it. Even the roar of the city can sometimes feel like a cry for help.

Inevitably, within a few days or weeks at most, you’ll find yourself getting swept right back into the big show, even though you know it’s all just an act. That’s perhaps the most amazing thing about a society: even if none of us fully believes in it, we’re all willing to come together and pretend we do, doing our part to hold up the tent. If only so we can shut out the darkness for a little while, and offer each other the luxury of thinking that little things matter a great deal.

We know it’s all so silly and meaningless, and yet we’re still here, holding our breath together, waiting to see what happens next. And tomorrow, we’ll put ourselves out there and do it all again. The show must go on.

If I was teaching Intro Anthropology, or Advanced Anthropology either too, I might use this passage as the Kickoff.

We chanced to spend the night in a motel in Vaudreuil-Dorion, at the confluence of the St. Lawrence and Ottawa rivers, a half-hour commute to downtown Montréal. 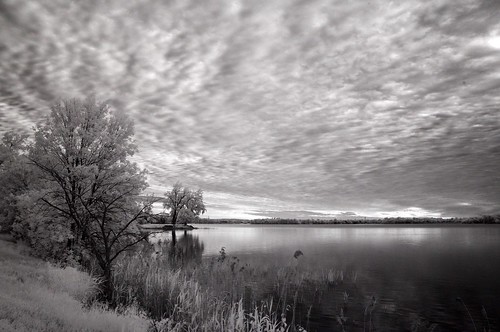 Along the rivers are houses that enjoy docks on the water, and that give full scope to Quebecois architectural styles. Consider this magnificent faux-château Trianon, and imagine the pride of its owners: 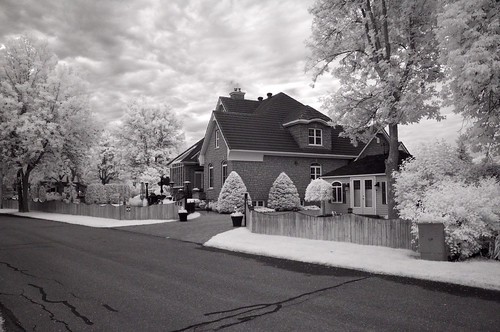 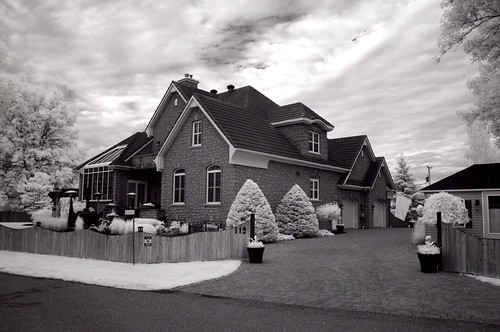 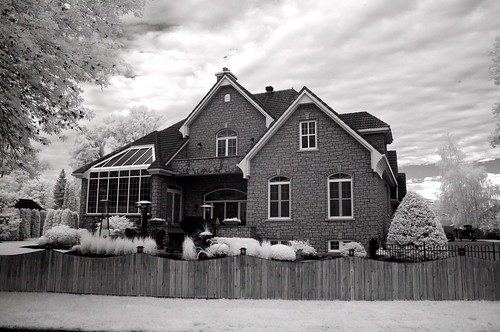 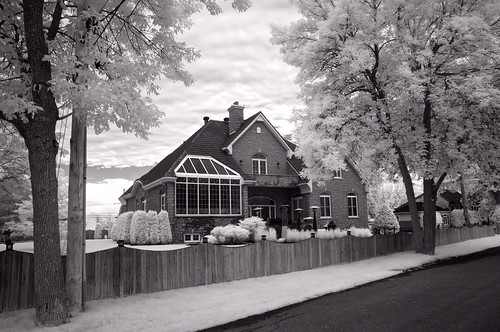 This house’s dock is middling-modest: 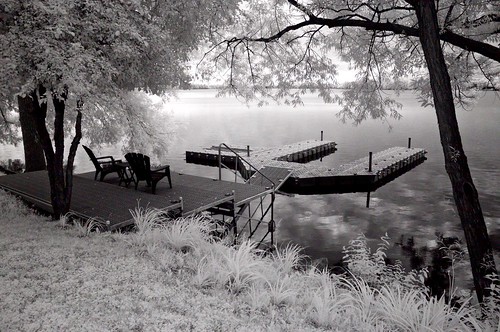 And other nearby neighbo[u]rs express themselves variously: 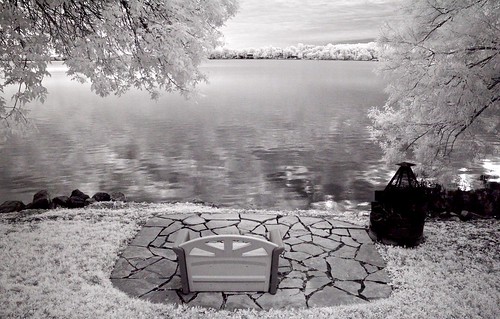 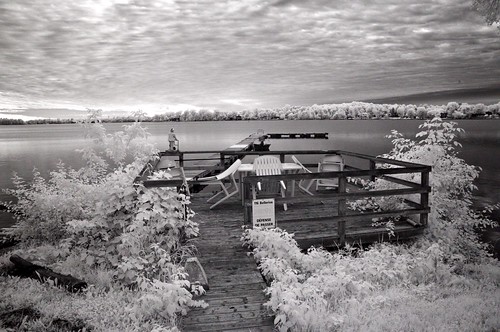 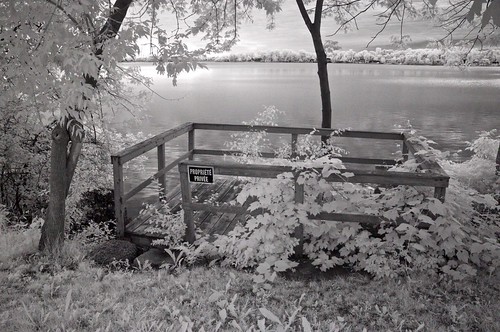 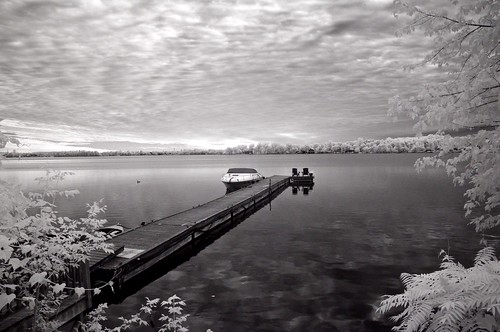