Has it really been a month since the last blog post? Of course lots of stuff in that time, books arriving and being wolfed down and at least partially digested, various end-of-year summings-up, and the plunge into 2022. Staying home, minimizing f2f encounters, watching It All Go Down.

Preparations for the weekly Convivium have supplanted blogging to some degree, and

tell the tale of my wandering attentions pretty well.

By way of paying attention to the world outside the many comforts of home, I’ve been following Heather Cox Richardson and Umair Haque, both sort of paywalled (or anyhow I’m not sure if hyperlinks to their posts on Substack and Medium are readily accessible), and both painting not-rosy pictures of what’s just around the corner.

…and I’ve revisited Joan Didion and Jorge Luis Borges profitably, and lately discovered Unflattening (Nick Sousanis) and The Secret To Superhuman Strength (Alison Bechdel), among (many) others.

…and then consult The Aleph (pdf), when you’re ready for the next thing… Hell of a ride. I’ve just ordered The Total Library : Non-Fiction, 1922-1986, so The Future Is Assured for the rest of January. And of course other things will appear, seemingly out of nowhere.

I resolve to start building my very own Lifebox, inspired by Rudy Rucker’s The Lifebox, the Seashell, and the Soul: What Gnarly Computation Taught Me About Ultimate Reality, The Meaning of Life, And How to Be Happy. Well, I’ve been building it all along, but the project longs to have its own dedicated (hyper)space.

Once again I’ve got only a single blog posting for the month. The photostream records a succession of grill-watching evenings: 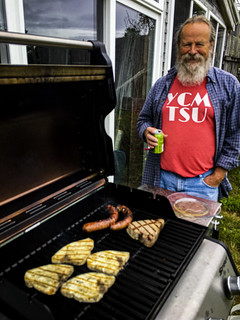 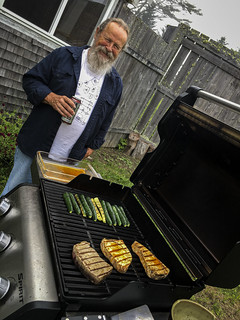 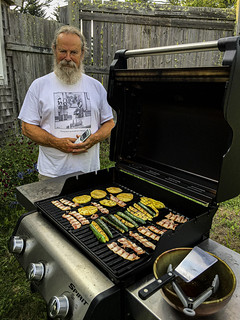 (Kate does the grilling, I having no genes for that activity.
She includes kohlrabi and green beans and zucchini as regular grillage,
and it seems possible that ALL garden produce can be grilled…) 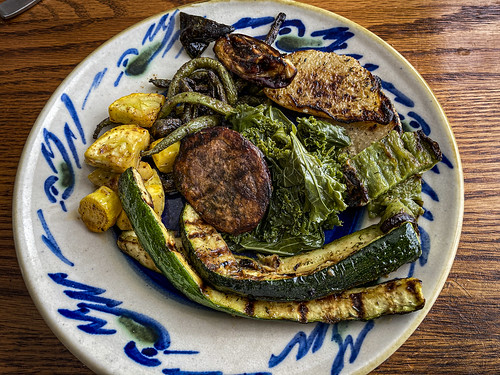 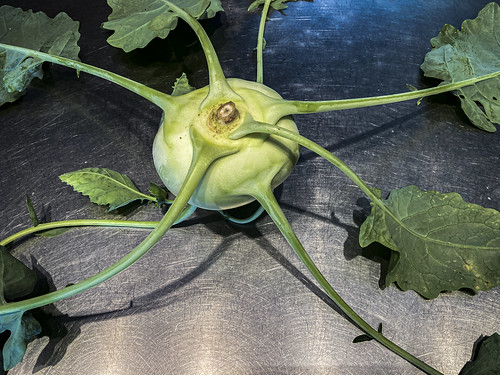 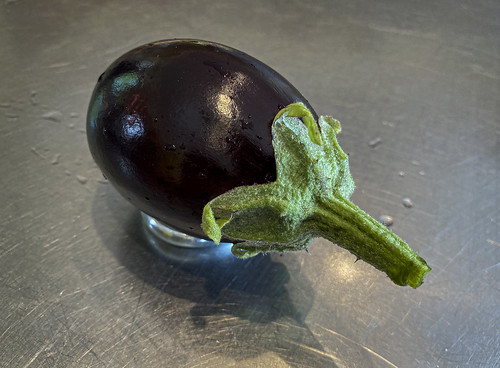 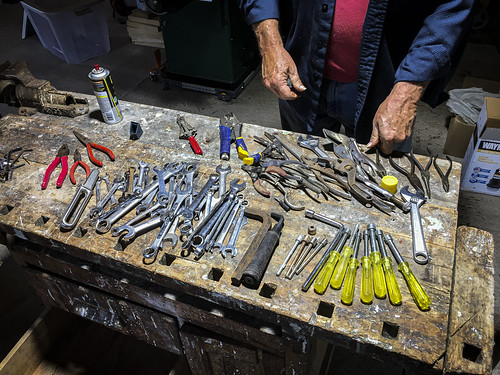 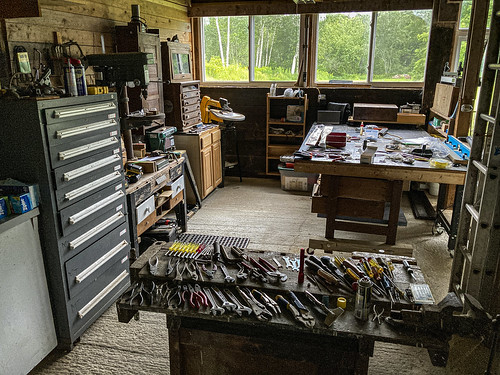 I bought a couple of professional-grade book carts to facilitate the Library (re-)organization process: 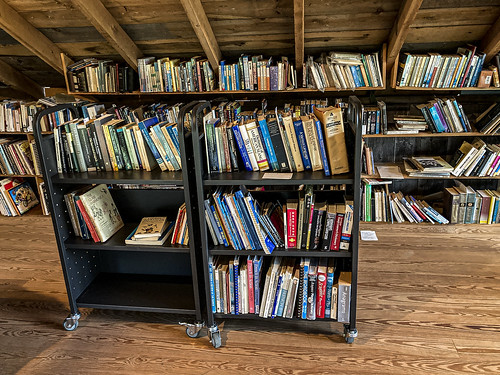 …and it proceeds slowly, arranged by my own idiosyncratic and ever-morphing categories: 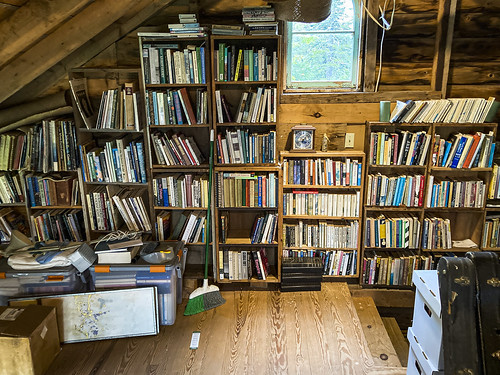 It’s been very pleasant to spend afternoons sitting here dipping in and out of a succession of rediscovered books. 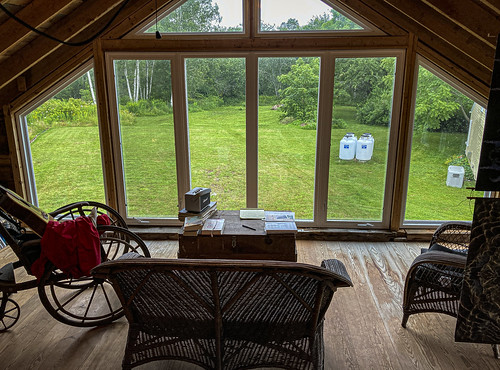 In Convivium space, I spent quite a while thinking about the Future. On other frontiers, lots of books read, music played, videos watched, trash picked up. Quite content to be mostly At Home, going from thing to thing.

I’ve been thinking about the perennial problem of Keeping Found Things Found, and about narrating explorations of the past and present, and that has led to consideration of Finding Aids for my various collections. Many happy hours have gone into the process of figuring out how to construct such summaries and guides, and most recently I’ve been using LibraryThing to build the database for my library of photography books (see a list of those tagged ‘photography’ for its current state) and considering how to sort and sub-categorize that collection to make it more useful and accessible. Others will follow.

This morning I picked up Peter Turchi’s Maps of the Imagination: The Writer as Cartographer, which I’ve had for 10 years or so and dipped into now and again. A couple of passages leapt off the pages and seem to cast useful light on my present concerns:

The closer we look, the more detail we find. The only limitation to our view is the limitation of our ability to see. In order to find something new, we simply have to be willing to look more closely, more carefully.

We all have our touchstones.

I read a lot of books, pinballing amongst genres and across disciplinary declevities as I please, and investigating some very odd (or at least infrequently-visited) corners of the print world. Mostly I don’t try to inflict my idiosyncratic tastes on others, but sometimes a book comes along that’s just too good not to make a fuss about. Today’s case in point:

Alex Wright’s Cataloging the World: Paul Otlet and the Birth of the Information Age.

Paul Otlet is probably not a person you’ve encountered before (and if he’s already familiar to you, I’d like to know how), but he belongs in the same visionary realm as Melvil Dewey (of library cataloging and 3×5 card fame), Ted Nelson (who instantiated hypertext), Tim Berners-Lee (pater of the World Wide Web), Doug Engelbart (of Mother of All Demos fame), Vannevar Bush (Memex and As We May Think), JCR Licklider (Man-Computer Symbiosis, ARPA), and a clutch of others (Watson Davis, Patrick Geddes, Emanuel Goldberg, Otto Neurath, John Wilkins) who will probably also be new to you. These people are arguably the primary architects/engineers/makers of the electronic world we all inhabit. The book is especially commended to

Other books I’ve read that I’d put into the same heap, and reread in light of Wright’s book:

George Dyson Darwin Among the Machines: The Evolution of Global Intelligence

James Gleick The Information: A History, A Theory, A Flood

John Markoff What the Dormouse Said: How the Sixties Counterculture Shaped the Personal Computer Industry

Fred Turner From Counterculture to Cyberculture: Stewart Brand, the Whole Earth Network, and the Rise of Digital Utopianism

David Weinberger Everything Is Miscellaneous: The Power of the New Digital Disorder

I’m just starting Wright’s Glut: Mastering Information through the Ages, and hoping for More Of Same.

I can’t say enough in praise of r0ml Lefkowitz’ talks on Semasiology of Open Source (this year’s and last year’s, from the O’Reilly Open Source Convention). Now that kind of thing OUGHT to enliven a meeting of librarians, but doesn’t. The atmosphere of library meetings is tainted by the fact that the participants are mostly fixated on an Institution that I love in the abstract, but find a lot to be pessimistic and critical about in the particular and concrete. Part of the problem is the attitude of most or at least many librarians: all too many are fraidy-cats, cringingly grateful for the crumbs that Academe bestows, and (with precious few exceptions) very much disinclined to rock even the boats that most NEED rocking. Another irritant for me is that many librarians just aren’t very curious about the territory outside the Profession. Few would see why they should listen to a keynote from an Open Source convention, let alone a couple of hours on Semasiology.

I must confess that Semasiology was not in my lexicon until I heard these sessions, though attention to the shifting meanings of words has been one of my lifelong playgrounds. (A Google Scholar search vouchsafes that “Carnap divided the study of language into syntactics, semasiology, and sematology…” …and Carita Paradis’ Reinforcing adjectives: a cognitive semantic perspective on grammaticalization reminds me that I’ve always been interested in the linguist’s perspectives on language).

Google Print really is shaping up to be a library, that is, of the world pre-1923 — the current line of demarcation between copyright and the public domain.

Umair Haque, at Bubblegeneration, tucks this in near the end of a long posting:

Google Print is also a killer example of an edge competence based strategy. Like core competences in the 80s and 90s, edge competences are going to dominate the post-network economy of the 21st century. By making info about books more liquid and plastic, Google atomizes upstream and downstream segments in the value chains. For example, it dilutes Amazon’s market power directly, by massively reducing switching costs – and, in general, the market power of anyone on either side of its value chain segment. Value shifts away from the core, and towards the edges.

Google has become the new ground zero for the “other” culture war. Not the one between Ralph Reed and Timothy Leary, but the war between Silicon Valley and Hollywood; California’s cultural civil war. At stake are two different visions of what might best promote authorship in this country. One side trumpets the culture of authorial exposure, the other urges the culture of authorial control. The relevant questions, respectively, are: Do we think the law should help authors maximize their control over their work? Or are authors best served by exposure—making it easier to find their work? Authors and their advocates have long favored maximal control—but we undergoing a sea-change in our understanding of the author’s interests in both exposure and control. Unlike, perhaps, the other culture war, this war has real win-win potential, and I hope that years from now we will be shocked to remember that Google’s offline searches were once considered controversial.