…and Kentlee followed up with a pointer to John Gall‘s The Systems Bible, which deals with Systemantics. It first appeared in 1975, was updated in 1986, and expanded in a third edition in 2012. I grabbed it on the Kindle and started reading, flipping between parody and an exposé of some of the fallacies and limitations of “systems thinking” as practised (and buzzworded) in the early 1970s. Delightful reading, a flavor of which can be sampled via Taylor Pearson, and from Drafty Manor. Gall was an acute observer and had a sharp eye for hypocrises, things hidden in plain sight, and the Emperor’s Clothes.

Facetiae, eh? Here are some of the dictionary entries for that one:

treating serious issues with deliberately inappropriate humor
flippant
joking or jesting, often inappropriately
a joke with a little drop of sarcasm
intentionally unserious
making humorous remarks or saying things they do not mean in a situation where they ought to be serious
characterized by levity of attitude and love of joking
dark humor
playfully jocular
waggish
cutting, witty, often sarcastic remarks
a sarcastic and sardonic comment, more sneering and meaner
not meant to be taken seriously or literally
joking in terms of pretending something is true,
while knowing that it is false

Hmmmm, I thought, how guilty am I of pretty much all of those? How many of the books on my shelves partake of the facetious and the parodic? Edward Gorey? Terry Pratchett? Archy and Mehitabel? The Good Soldier Svejk? The Big Lebowski? Sandman? uh oh…

A couple of days ago I happened upon Brief Notes on the Art and Manner of Arranging One’s Books (Georges Perec). Since I’ve been working on Arranging in the Auxiliary Library in the barn for at least a month, it seemed a no-brainer to order. And today along comes email from John-the-son asking about the Nexial Institute, which several of us [consider that we] invented and elected ourselves to in about 1973. His question:

So I’ve always assumed that this idea had some particular vision or principles behind it, but I also get the impression it may have been a joke. Perhaps both.

Have you done any writing about what was or was not within this set of ideas? I figured this included several others from … grad school days? Or early Acadia?

Did you ever do anything formal with this Institute? Or particular ideas that propelled the conservations surrounding it?

I’ve got queries out to the original perpetrators (Kent, Shel, Mom) and I’ll be interested to see their takes. For me the Significance of the Nexial Institute has remained …well… Significant, and I’d even claim that everything I’ve done since 1973 is somehow rooted in the basic notions of everything connected to everything, of Systems, of the Dynamical. But I suppose it was basically a joke, or perhaps more accurately a Joke.

Kent’s response fingered the origin of ‘Nexial’ from A.E. van Vogt’s sci-fi The Voyage of the Space Beagle, which I don’t think I have ever read (and so have ordered…). Wikipedia:

The main protagonist of the novel is Dr. Elliott Grosvenor, the only Nexialist on board (a new discipline depicted as taking an actively generalist approach towards science). It is Grosvenor’s training and application of Nexialism rather than the more narrow-minded approaches of the individual scientific and military minds of his other shipmates that consistently prove more effective against the hostile encounters both from outside and within the Space Beagle.

And here’s John’s response to my response:

Got it… But did it have as a part of the germ, the inversion of all that complexity, of the observer influencing what was observed, and of the realization that follows that your every intention, conscious and otherwise, is responsible for influencing the “outside” world, just as it is imperfectly creating the illusion of that objectivity within consciousness, replete with ungraspable biases? The unknown knowns that constrain our very conception of what is possible and real? Oh, the paralysis that comes from that realization of interconnectivity, when you realize that every yarn you pull at will bring worlds crashing down and others springing into existence, barely or not even perceptible. The only ways forward I perceive from there is either to blindly follow the habituated momentum (karma) that was put into place before such a realization until the yawning chasm of awareness undilates again, OR fall into nihilism OR to consciously create an intention (art?) which requires an underlying faith that it will come about, and that circumstances will co-incide to bring it about, if the intention is aligned across consciousness, and circumstances will throw cascading obstacles if the different levels of intentions are incoherent or at cross-purposes?

um… probably, what with the amount of consciousness-expanding consumption that was going on?

So this comes from the “duh” perspective of yes, “yeah sure, dad” everything is connected “so what?”

So there’s the next Challenge, unpacking all of that. At the moment, all I have to contribute is the conviction that “a lot of my present-day library could be woven in”, and some photos of a few shelves from the barn to suggest some of what I can draw upon: 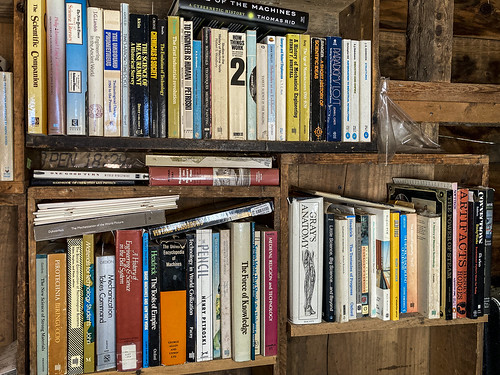 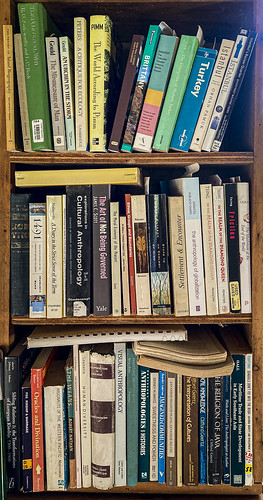 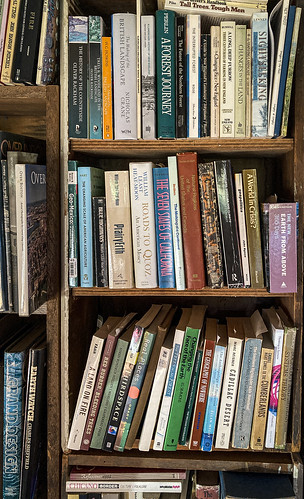 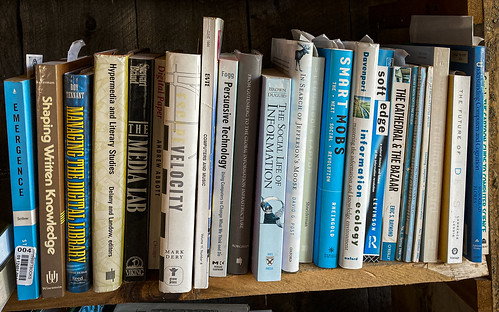 (Those categories are approximate and partial and provisional…)