There’s no doubt that a lot of my life revolves around this machine, before which I spend several hours a day. I’ve been riding this pony since 1992 (when I started building a Gopher presence, soon after I started work as a reference librarian at W&L), or maybe since 1989 when I started playing with HyperCard, or perhaps since 1984 when I bought my first microcomputer (a TI-Pro, still in the barn), or maybe 1979 when I started to play with SYMAP (making maps of demographic data from the Hungarian census of 1900), or maybe 1962 when I first started working with punch cards (as research assistant to Bob Textor in cross-cultural studies). At each of those junctures I had some idea of where I was heading, but the destinations kept changing as new possibilities emerged.
I seem to be in another spate of thinking about the ways the Web is/has been evolving, in the proximal contexts of Licklider‘s Libraries of the Future [1965] (which I’m reading at Gardner’s instigation) and the impending visit of friends with three home-schooled kids (for whom my question is: where does The Computer fit in what they’re doing?)… and reflecting on the many ways in which my life has been tangled up with computers. For at least 45 years I’ve seen them as essential tools for things I needed to do, though generally my imagination has outrun my technical capabilities, and I’ve relied upon the multiple kindnesses of others to assist with practicalities and realize my imaginings. There’s a looooong history of books and articles and Web resources that I’ve been influenced by, and an equally convoluted history of apps I’ve experimented with as I’ve worked at making sense of the potentials. Wish I could reconstruct all the steps…
I started library school in January 1991 with the question What will microcomputers do to libraries? but I certainly didn’t foresee that the most profound effect would be to distribute the end-user’s experience in most information transactions –to make the physical library mostly irrelevant to seeking answers, to enmesh the user in networks composed of nodes that might be on different continents, to make multimedia an everyday experience, and to proffer tools that make the user an active contributor to the construction of distributed knowledge. Two of today’s cases in point:

Harper’s release of 150+ years of full text archive exposes a glorious trove, and the possibility of gathering up David Halberstam’s contributions to the magazine adds a great deal to a resource like Christopher Lydon’s program recorded two days after Halberstam’s death

I discover that others who are reading Eco’s Mysterious Flame of Queen Loana have established a Wiki-based annotation project for the book.

At the moment I’m eagerly awaiting the imminent arrival of Dave Weinberger’s Everything is Miscellaneous: The Power of the New Digital Disorder (publishing tomorrow), listening to Weinberger’s Radio Open Source appearance, keeping an eye on Weinberger’s blog around the book, and still savoring a two-hour podcast of Weinberger’s Social Media Cluster talk of last week.

Another bonzo post over at Language Log, this one invoking (among other things) aposiopesis and gxddbov xxkxzt pg ifmk, both of which had escaped my notice heretofore. My education continues, and seems to be picking up speed on the downhill run. Perhaps coincidentally, I’m enjoying Umberto Eco’s The Mysterious Flame of Queen Loana.

Fairly often I’m gobsmacked by the complexities of things I knew just a bit about. Latest case in point: the perhaps-fatuous domain of lolcat, referenced in today’s Language Log. I mean, I did know about 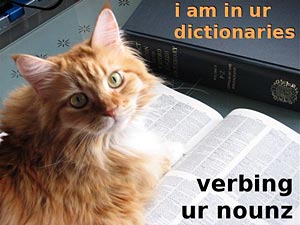 but I didn’t grasp its deeper significance. See more on the harbl meme… and a couple of hours later, LOL-Kitteh as a Second Language (LKSL-101) in Five Easy Steps, via The Lexicographer’s Rules. Whatever NEXT?

…and watch this 1993 AT&T Vision of the Future (via Paleo Future, “a look into the future that never was”). You won’t be sorry…

I finally got around to watching The Inner Life of the Cell from the Biovisions at Harvard initiative (via Make’s blog a week or so ago). The animation is, well, amazing. The narration tumbles along polysyllabically (can you say ‘Leukocyte Extravasation’? I thought you could…), and it’s a damn good thing that one can watch and re-watch, and that there won’t be a quiz… On a more serious note, the watching prompted me to scratch my head again over the challenge of Gardner’s comment to my Grand Jeté post, which ends with this interesting observation/question:

…the notion that knowledge is dynamic, ever-circulating, breathing in and out, washing some books up to shore while washing others away to the great unbounded deep, works very well for certain of the humanities, but works only occasionally for the physical sciences. A test case: what about advances in medical knowledge? Are they part of this great sussuration of knowledge, or are we really getting somewhere? Do we really need to rethink, oh, the idea of a cell?

I’ve just connected my laptop into the sound system (via an Indigo Echo unit that I bought a while ago), and I’m enjoying mp3s and YouTube stuff through the Earthworks speakers. Can’t think why I didn’t do this long ago. Stuff like this from Nederlands Blazers Ensemble comes through amazingly, and renews one’s faith in humanity:

If Tom Ze isn’t a household word out your way, give a listen to the four items linked at Captain’s Crate (“Rare, funky, and soulful music from the treasure trove of Captain Planet and Murphy’s Law”)