A post to 43 Folders points me to this wonderful bit from Walden:

I say, beware of all enterprises that require new clothes, and not rather a new wearer of clothes. If there is not a new man, how can the new clothes be made to fit? If you have any enterprise before you, try it in your old clothes. All men want, not something to do with, but something to do, or rather something to be. Perhaps we should never procure a new suit, however ragged or dirty the old, until we have so conducted, so enterprised or sailed in some way, that we feel like new men in the old, and that to retain it would be like keeping new wine in old bottles. Our moulting season, like that of the fowls, must be a crisis in our lives. (Chapter 1)

Consider this spectacular image, from this morning’s Flickr Nation: 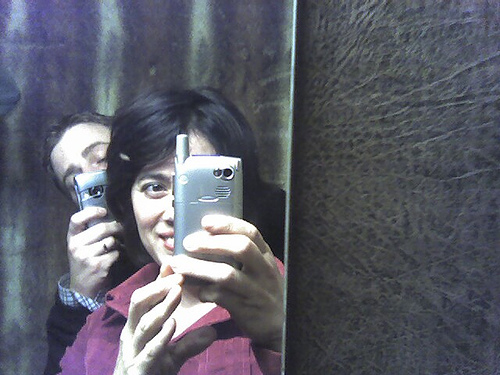 (I hope I’m doing this right, CC-wise: this one is by Caterina Fake herself (www.flickr.com/photos/caterina/91282844/).
It’s the very apotheosis of the photobooth snap, with a reflexive curveball thrown in. NB that this very photobooth in San Francisco evidently can post directly to Flickr…)

I’m a latecomer to the notion that there’s something deeply significant in this medium, but I want to start a thread on the side to track it. Among others whose work precedes and informs this effort, I’m especially indebted to Photobooth, Babbette Hines’ glorious collection of “discarded images of men and women who crowded into photo booths to capture a moment on a little strip of film”. I have very few photobooth bits in my own collection, but there are two from the Joe Wilner trove: It’s paradoxical that these share something with a few of the tintypes –a sort of artlessness in the pose that really conveys something about the essence of the person. Consider this one: These are probably separated in time by something like 60 years, about as much time as separates the later ones from now.

I’m still hunting for whoever has analyzed the chronotope of the photobooth experience, the 1-2-3-4 exposures, with enough time between for the subjects to alter their pose/presentation, and about how people developed that temporal opportunity over the years. I have Babbette Hines’ book on order, and that may be just what I’m seeking.

It’s also necessary to explore what’s already out there on the Web, and a quick Google search nets a bunch: photobooth.net (“We aim to make this the most comprehensive photobooth resource on the internet…”), Wade’s Photobooth Gallery, the Flickr photobooth Group, Mr.Mixup’s Photobooth Archive (U.K.), just to start with…

Anyway, this is an open thread, to which I’ll add as I learn more.

“One nice thing about democracy is that you can have a change of scoundrels.”