Now and again I discover something on my shelves that I’d forgotten about, or never really assimilated when I acquired it, and Light is Cast upon current concerns in unexpected and even downright magical ways. Today’s case-in-point is a strange and altogether marvelous book with two CDs: steve roden’s …i listen to the wind that obliterates my traces: music in vernacular photographs (1880-1955) (2011). The sort of thing that one acquires sensing its talismanic power and knowing it will never be seen again. The photographs are deliciously chosen and arrayed: 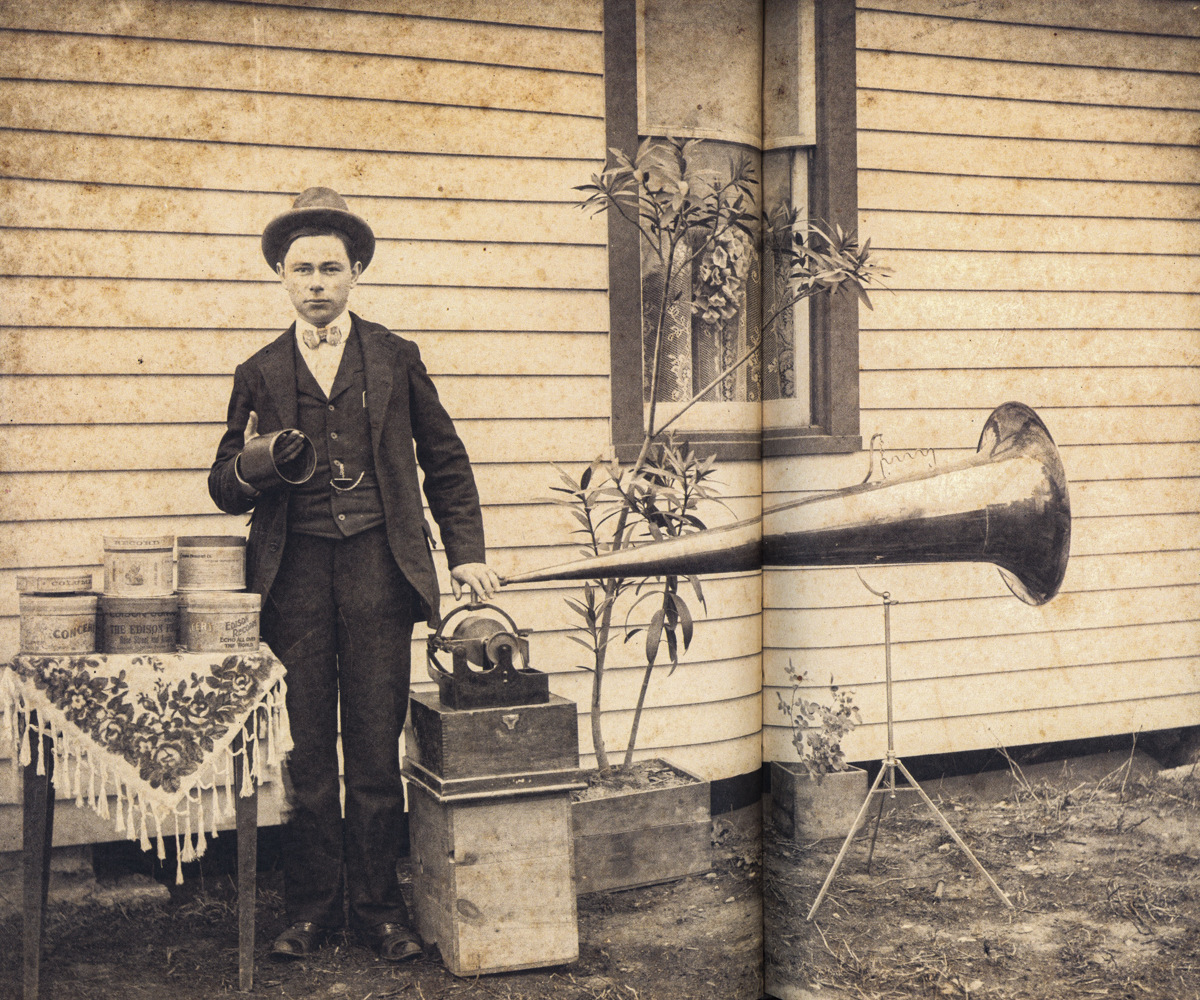 …and the sparse (and all-lower-case) text is incisive. The two CDs contain a very eclectic menu of remastered 78 RPM disks, many of which are new to me, and which complement the photographs brilliantly. And sure enough, YouTube comes through with a tantalizing peek:

But it was a chunk of text that really brought me up short, being a perfect distillation of things I’ve been thinking about collections, collecting, and collectors. Here it is, just as set down, lower-case and all:

if you have this love of inconsiderable things and seek quite simply, as one who serves, to win the confidence of what seems poor: then everything will become easier, more coherent and somehow more conciliatory for you, not in your intellect, perhaps, which lags marveling behind, but in your inmost consciousness, waking and cognizance.

of course, i too have sat alone many a night amongst a pile of books, a stack of records or a box of old photographs: conversing, organizing, arranging, connecting, disconnecting and listening to the voices of these inconsiderable things. in such moments i begin to form a world, seeing (or hearing) each thing shift from an individual star towards part of a larger constellation. when new paths between things are revealed, new images are formed, and the relationship of single objects to each other becomes more complex, more overwhelming and less defined.

as long as one is able to interpret and re-interpret the relationship between the objects on the table, the collection remains alive in one’s inmost consciousness, enabling the collector to make deep intuitive connections that leave the intellect to lag marveling behind, a collection should not have to conform to some overbearing logical and finite sense of completion, as much as it should have the potential to exist in a state of flux and evolution, a collection guided by openness is not afraid of imperfection, for an imperfect collection necessitates deeper questions than one which simply attempts to complete a checklist.

certainly one must have determined criteria for addition and inclusion, but th[ose] criteria should also be shifting and changing as old rules are allowed to be broken and new rules are allowed to be born. previously unsought discoveries should have permission to shift things, allowing the collection to be a conversation whose guiding principles can be built up and taken apart in the service of both expansion and contraction (as well as rigor, focus, obsession, passion and vision). building a collection should be a personal endeavor, where value is determined by the gatherer rather than by the marketplace.

the painter arthur dove said that everything an artist makes is a self-portrait, and i tend to think that most collections reflect a similar view. the best collections and the most visionary collectors bring objects together that do not necessarily seem comfortable with each other at first glance, yet upon deeper inspection there seemingly disparate parts reveal a consistency of thought rather than a consistency of form. such cases have the potential to reveal the complex inner workings of the gatherer.

He’s got my number, sure enough. As has Minor White:

The photographer projects himself
into everything he sees,
identifying himself with
everything
in order to know and feel it better

All photographs are
self-portraits.

This morning, while waiting in the barn for today’s Zoom yoga session to start, I gathered up a few word books in the general realm of American English and one fell open to a map of isoglosses, which immediately called to mind a song written Donkey’s Years ago by my dear friend Ken Stallcup, who said that he got one good song out of every career. I quarried the mind for all that I could remember of the text as I lay on the mat, and here it is (there might be verses I haven’t remembered, indeed I hope there are…):


Little peasant upon the land
what’s that implement in your hand?
How many years have you been here?
What do you call your mother’s brother?
Tell me what you shouldn’t do and what you oughta,
Now that I’ve got my data I’m on my way

Anthropologist pen in hand
Now you’re standing here on my land
You to me are but a passing breeze
Kroeber, Lowie, Leach and Levi-Strauss
and even Malinowski have stayed in my house,
Now that you’ve got your data, where’s my pay?

I’m contemplating a heap of books on American English and on dialects thereof and trying to figure out how to make an efficient and interesting summary of their whats and whys, via comparisons and tasty extracts. How is one to make sense of these riches, thousands of pages of words and analysis and commentary, difficult of access and best consumed in sporadic tastings, not in epic bouts of reading? The collection or more exactly collocation would be perfect for bit-by-bit consumption in the Locale of Easement, but for the unwieldy format of the Large Book. A cleverly designed hinged or rolling desk might be the solution, but would perhaps not meet with universal enthusiasm if constructed and installed as a fixture in the Smallest Room. Perhaps a Dictionary Alcove built onto the side of the house…

At work upon several future posts in these realms.

From time to time I happen upon a bit of text that just has to be passed around. Here’s today’s:

Christopher Lydon’s Radio Open Source has brightened a lot of the last decade for me, opening doors into places and subjects I hadn’t known I wanted to learn about, and introducing me to stuff I’ve since realized I care deeply about. A case in point: an interview with Colm Tóibín, towards the end of which he reads an Elizabeth Bishop poem which is achingly reminiscent of the Nova Scotia I know. His lead-in is absolutely spot-on (“…what was it that just hit you, emotionally? where it was in the poem where that began, and was sustained?”)

I happened upon this bit of text as I burrowed through musty files on backup drives, and I confess that I’m pleased with it:

In my freshman year at Harvard I studied Swedish (Scandinavian B –there was no Scandinavian A) under Göran Printz-Påhlson, a pleasant if (as I thought) somewhat lumbering Swedish poet (I particularly remember that he wore leather jackets which creaked when he moved). He was a friendly and generous teacher, though I was too much in awe to actually seek him out and, well, converse. Just today I happened upon an electronic version of his Letters of Blood, and Other Works in English, and learned that he died in 2006. The introductory materials tell me some of what I missed by not, well, conversing.

Poetics is a subject of which I am largely ignorant, but a quick flip through the pages of the prose parts of the book suggests that I might enjoy discovering on some winter night when the snow howls without. And I’m mostly immune to poetry, though sometimes my attention is caught. And caught it is by some bits of Printz-Påhlson’s, like this from My Interview with I.A. Richards

Inversion is a counterfeit experience
there is but one irreversability.
Chestnuts, rabid squirrels, slosh and sleet,
the sullen, birdstained wisdom of John Harvard.
O Fyffes bananas, obscene planks,
the flexes bared to vision like the sinews
in Vessalius. I grope my way
through the intestines of heuristic house.

Last night we heard in Kresge Hall
a lion-vested English poet fulminate
like an under-paid volcano against Science,
applauded by a host of boffins.
Afterwards, a girl called Shirley took my hand
and wished to lead me through the maze
toward the magus posing there as Tannhäuser,
fettered with electric wires in a great maidenform…

and here’s the whole of Songs of Dock Boggs

There are gridiron reverberations
in the hills, sourmash
blandishments bleating
from the sheriff’s office

Ah, the gavroche innocence of a barnyard rape!

He offers a smile, mild
as pick-axe handles a
mile wide which kindles
the hide of rutabaga;
their red necks swabbed
by cool, pale blue grass
in the abstracted stare of poverty
Bushwacking the melodies of God
for the breakdown of bushfires
he nurtures illustrious health
with the grating pap
of pink indulgence,
plucking the lure of life
from the audible mouchoir moment
when distant authority suppurates
the blueridge landscapes of childhood.

Raw death: a clodhopper shovel
smack in the kisser.

Here I sit thinking: Aw, shit, think how great our country is.

Here I sit, scratching my ass, thinking: Aw, shit, think how great our country is.

Here I sit, smoking some grass, scratching my ass, thinking: Aw, shit, think how great our country is. This one wandered out of my mind and onto a piece of paper yesterday, and sat around for a day expecting to be posted:

I grew up wondering
if I’d live to see the Millenium
and here it is almost a decade beyond,
the last of the Noughts.
What should I wonder now?

These things seem to keep happening, this time as I thought about where to begin in laying out a landscape of African musics that I’ve been accumulating in mp3 form since the spring.