While visiting my sister-in-law and combing her library for something to read before sleeping, I ran across a book I remember by its distinctive dust jacket as a Christmas gift, given somewhere in the family in the early 50s. James Thurber’s The Thurber Album (1952) is a collection of prose portraits of people from his youth in Columbus OH, most of them originally published in the New Yorker. Thurber starts a profile of his father (“Gentleman from Indiana”) with this object lesson in storytelling (especially felicitous phrases in bold):

One day in the summer of 1900, my father was riding a lemon-yellow bicycle that went to pieces in a gleaming and tangled moment, its crossbar falling, the seat sagging, the handle bars buckling, the front wheel hitting the curb and twisting the tire from the rim. He had to carry the wreck home amidst laughter and cries of “Get a horse!” He was a good rider and the first president of the Columbus Bicycle Club, but he was always mightily plagued by the mechanical. He was also plagued by the manufactured, which takes in a great deal more ground. Knobs froze at his touch, doors stuck, lines fouled, the detachable would not detach, the adjustable would not adjust. He could rarely get the top off anything, and he was forever trying to unlock something with the key to something else. In 1908, trying to fix the snap lock on the door of his sons’ rabbit pen, he succeeded only after getting inside the cage, where he was imprisoned for three hours with six Belgian hares and thirteen guinea pigs. He had to squat through this ordeal, a posture he elected to endure after attempting to rise and bashing his derby against the chicken wire across the top of the pen.

Time to quarry the Complete New Yorker for more Thurber…

r0ml posted a lovely story about jinxes, invisible friends, and cures for blogging hiatus. It ends thus, but read the whole thing:

And so it is with blogging. Sometimes, one gets “jinxed” — struck dumb, as it were, by mysterious forces. How to regain one’s voice following such an incident?
Wait.
And think.
And imagine oneself blogging again.
Thank you, Spike.

at this point, I’ve somewhat lost interest in promulgating the Wolframite belief that reality is made of gnarly computations. I still think it’s true, but I’m tired of pointing it out.

The resonance for me is with the “tired of pointing it out”, not the Wolfram connection.
I still write notes to myself about teaching-and-learning, but they rarely make it into blogland because, well, what’s the point? I said/wrote all that stuff before, mostly to little effect, and “I told you so” is so much cold oatmeal (I spent a bunch of years harrassing and haranguing library and departmental colleagues on those issues, and retired six months ago, feeling that I was getting nowhere with the effort).
It’s comforting that there are people who don’t just get It, they seemingly are It. George Siemens is one of them, over and over again (most recently, Learning, assessment, outcomes, ecologies), and I am reminded how indebted I am to Stephen Downes and a number of other canny commentators –Gardners, Brians, Bryans, Alans, etc. A glorious case in point is an hour of audio from a recent talk Stephen did, after returning from a sojourn in the Magdalene Islands. I’m posting some especially pithy excerpts as an experiment in access to what seem to me to be original and important ideas. Stephen’s style is digressive, but productive …especially if you can re-listen, and even more so if you can have the bits separated, so it’s not a 60-minute bolus. I suspect that many in his Tennessee audience were baffled/nonplussed by his message, which is pretty much bone-radical:

Where we’re headed: Learning Networks *not institution-based (0:34)
*not product-based educators… focused on enabling people to provide service for themselves (1:00)
we’re locked into this idea that this is a service we give them… (0:25)
*education isn’t about the content …it’s about engagement, about practise, about reflection (0:39)
Web 2.0 isn’t a fad (0:17)
‘quality in education’ (0:58)
Richard Nixon (2:36)
information about a resource is scattered across the Web (1:26)
learning becomes a network phenomenon (0:35)
content mashes: aggregated, remixed, edited, distributed (0:45)
APIs allow distributed things to talk to each other (0:18)
standards vs protocols: RSS as example (1:47)
produce knowledge by interaction: markets (0:32)
if you’re looking for the elements of e-learning 2.0… (1:35)
from text-based to full multimedia content (0:45)
producing educational resources (0:41)
MyGlu (see freebie code link) (1:31)
RSSWriter, and comparison to Learning Management Systems (see documentation) (1:20)
what’s the future of learning resources… why can’t our students do this? (0:39)
Four Basic Principles: is it Open Source? (1) autonomy (2) diversity (3) openness (4) interaction (2:15) 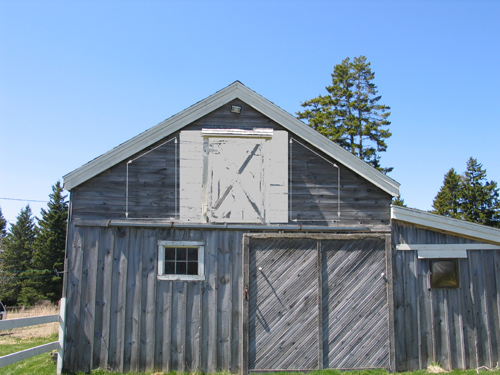 I’m thinking of a sliding glass patio door in the c. 6′ x 6′ greyed-out space, with an added porch/deck, no more than 4′ wide, over the (soon to be replaced) sliding door (needs to be a door for second-exit purposes). The sketched-in side windows are a bit more conjectural, and might not be trapezoidal.

Brad and Jude Fulton have been friends of ours for omigod 30+ years. They live in South Ohio Nova Scotia, not far as the seagull flies but a whole day’s drive in the absence of wings. We got together for a couple of days of talk and music, and Brad consulted on the barn loft renovation project. Of course there had to be a picture: 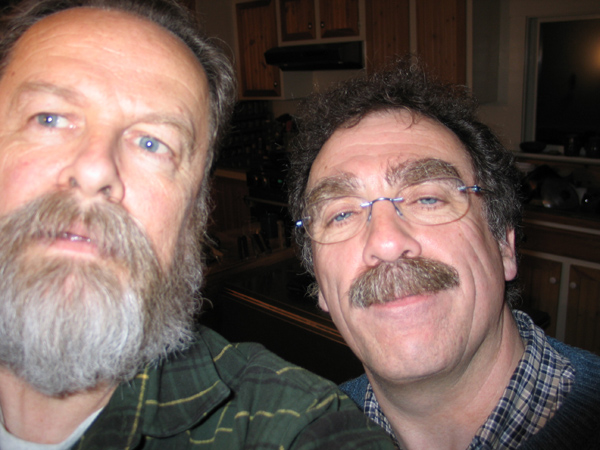 See also the Saga of the Stove Wicks to get a sense of Brad’s essence.