This is probably a long-run challenge sort of a Question, so feel free to nibble off and consider whichever elements speak to you.

The last two years have been a hell of a rollercoaster, and the Ride clearly continues. So:

How am I a different person than before COVID? How am I unchanged?
And what might one look at to find answers to those questions?

Pretty much every year I've used Yesvember (the week between Christmas and New Years, a time-out-of-time) to do some sort of summary of present-state and assessment of what's emerged since the year before, and I'm in the midst of that now, greatly enjoying the process of stretching it to cover two extra-ordinary years.

I'll probably post some of my own findings on this page, and let you know when updated.

You know what a polymath is, I reckon: someone who knows a lot of things. That's from /polu-/ (normally rendered as poly-) 'many, much' plus /math&emacron/ 'learning' (and yes, that's related to the math in mathematics). I imagine you're also familiar with peri-, as in perimeter, periscope, periphrastic, and peripatetic. That's from /peri/ 'about, around'. So, yes, perimath means someone who knows about things — you could say they know details peripheral to the things. (And a person who knows about a lot of things could be called a polyperimath.)

That might not sound like a good kind of thing to be. But believe me, there's a lot to be said for knowing about things — knowing that information exists, and knowing where and how to get that information. Very few people will remember everything exactly as they read or learned it, and the amount of information available will be forever greater than any one person's capacity for learning it all. But if you see some reference to a fact, and you can remember where and how to find out the details — if your mind is not an encyclopedia but a catalogue or search engine for a whole library — you can be very intellectually effective indeed.
(from sesquiotic.com)

As usual, it seems that I've contrived another almost bottomless Rabbit Hole to investigate: the Yesvember stocktaking has inspired creation of lists of books and texts and musics and video, for my own purposes, and you're welcome to ignore the links below... I'm inclined to rewrite my own question a bit, to ask how my life is different after two years of COVID. There are two major differences:

I do notice that age is catching up: slower to get up and find my equilibrium, less inclined to bend down, more careful on stairs and with loads I carry. In the last two years I've had a couple of episodes of back problems, occasional knee issues, and a bad ankle sprain last winter, but mostly rapid recovery. As for hearing, I miss more than I did a couple of years ago, or perhaps it's that folk do mumble so... Sight seems pretty much the same, but I'm using reading glasses more. Yoga is my primary index of physical state: before COVID I was able to sit seiza (on my heels) and do Urdva Dhanurasana (the Wheel) and Supta Virasana (Saddle)... no longer, thanks to the ankle thing. But my balance is if anything better. In other activities, the roadside trash picking-up continues unabated (except in bad weather). Psychically, I notice myself to be increasingly faintly ridiculous in my public role as that homeless-looking dude who picks up trash (as Kate described me to somebody), and the private role as that retired professor who spends his time reading in the barn... but I find that I care less and less about appearances.

It's a bit sobering to note that I'm now within a few months of my father's age when he died (brother John got to 81, Alice to 85, David to 75). Here's what I'm working toward: 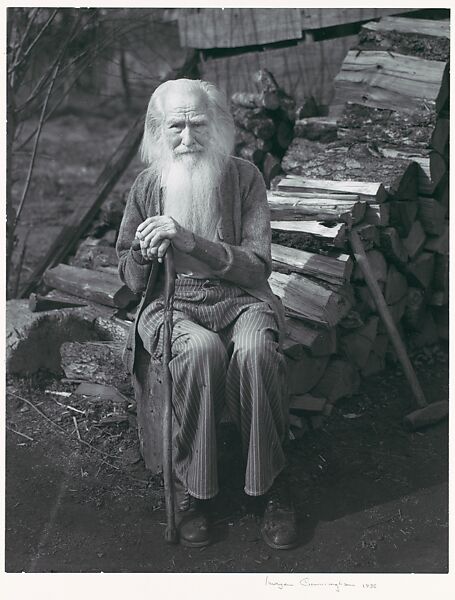 (Imogen Cunningham's portrait of her father at 90)

Some things haven't changed in the two years, except to intensify: I read more, and more widely (the list of books below documents that activity), and write more too, mostly on yellow pads and in html texts that live at oook.info. There's been a lot of photography (see the spread of Flickr albums and the Joint Show with Betsy in September 2020) since the completion of my 12th Blurb book (in January 2020). And on the musical front, several new instruments (some of them documented here). The blog continues somewhat fitfully.

As for "what might one look at to find answers": my /answer/ to that takes me back into my archives of written and read material, which I've been wandering through and trying to summarize via lists and other mappings of terrain. The chronology is captured in scrawled yellow pads, my [incomplete] log of Convivium notes, blog posts, snippets of text copied into txt files, and piles of realia, books especially. These are my own baby hippopotamuses (...only a mother could love...), and a personal joy to re-encounter and review, but not perhaps of interest to all of Rabbit's friends and relations. Overkill, where is thy sting?

It occurred to me to try to identify the most influential books I've read in these last two years, and here's what I've come up with:

Hyperobjects Timothy Morton (took a while for 'hyperobjects' to sink in, now I see them everywhere)

The Nutmeg's Curse: Parables for a Planet in Crisis Amitav Ghosh (World-Systems reawakened)

A Biography of the Pixel Alvy Ray Smith 14ix21

Finding the Mother Tree: Discovering the Wisdom of the Forest Suzanne Simard

It's surprising to look through the vastness of the (mostly-Amazon) book purchases in chronological order, and so explore the twists and turns of my evolving interests. Here's the full list: books bought, 2020 and 2021. A next task is to group them by subject matter.

In the process of cleaning up the desktop and the several drives attached to the iMac, I gathered up the mountain of textfiles I've created during the two years, but I haven't done anything more so far than to put them into chronological order. The list would be useful if sorted by subject matter, and if the rather enigmatic filenames were annotated. That's probably not really worth doing, but it's interesting to see the volume of what I've collected as TextEdit .txt files