About 50 years ago (or maybe more) I realized that I saw anthropology through the lenses of Space and Time, that I was in fact a geographer manqué, but fortunately anthropology has usually been quite tolerant of interdisciplinarity, and my cartographic and diachronic foibles were indulged by graduate school professors. Once I escaped into the professorate myself, nobody questioned my creation of a course in Human Geography (which I taught for most of my 18 years at Acadia), and my side hustles into demography and ethnomusicology and linguistics puzzled but didn’t affright faculty colleagues. The escape (after 1990) into the world of libraries was even more liberating in extra-disciplinary senses. As one of my mentors in Reference Librarianship put it, “It All Counts!”, and I bloody counted it all for 13 years at Washington & Lee.

Words have always been a signal element in my cross-disciplinary forays, fiercely pursued and lovingly collected and then deployed to sometimes-bemused audiences. And so when I saw David Crystal’s Words in Time and Place: Exploring language through The Historical Thesaurus of the Oxford English Dictionary I immediately snaffled it up. That Thesaurus, a 2-volume behemoth published in 2009, tempted me mightily, but at $495 I hesitated… and now it’s mostly available on the used market for upwards of $600 if it can be found at all. Crystal’s little book is an irresistable aperitif:

My aim is to illustrate the way the HTOED is organized, to show the synergy between the thesaurus and its lexicographical parent, and to explore some of the linguistic and social insights that emerge from this interaction…

The alphabetical principle [of the dictionary] is an enormous convenience (once one has learned to spell), but it is a semantic irrelevance. Words which belong together are separated… We do not learn words in alphabetical order, either as children or adults. Rather, we learn them in a meaningful relation to each other as we develop our understanding of areas of experience…

Words and meanings change over time, so it is crucial to know what period we are dealing with before we are able to interpret someone’s lexical use…

…our ability to select an appropriate wordd depends on our awareness of such factors as where the word is used—by which sections of society, on which social occasions, in which part of the country or of the English-speaking world…

Crystal offers terminology from 15 semantic fields: words for dying, nose, being drunk, light meals, a privy, a fool, terms of endearment, oaths and exclamations, inns and hotels, a prostitute, money, calm and stormy weather, old person, sspacecraft… presented as chronological tables, timelines. Here’s a sample from the 20 pages of “words for being drunk”: 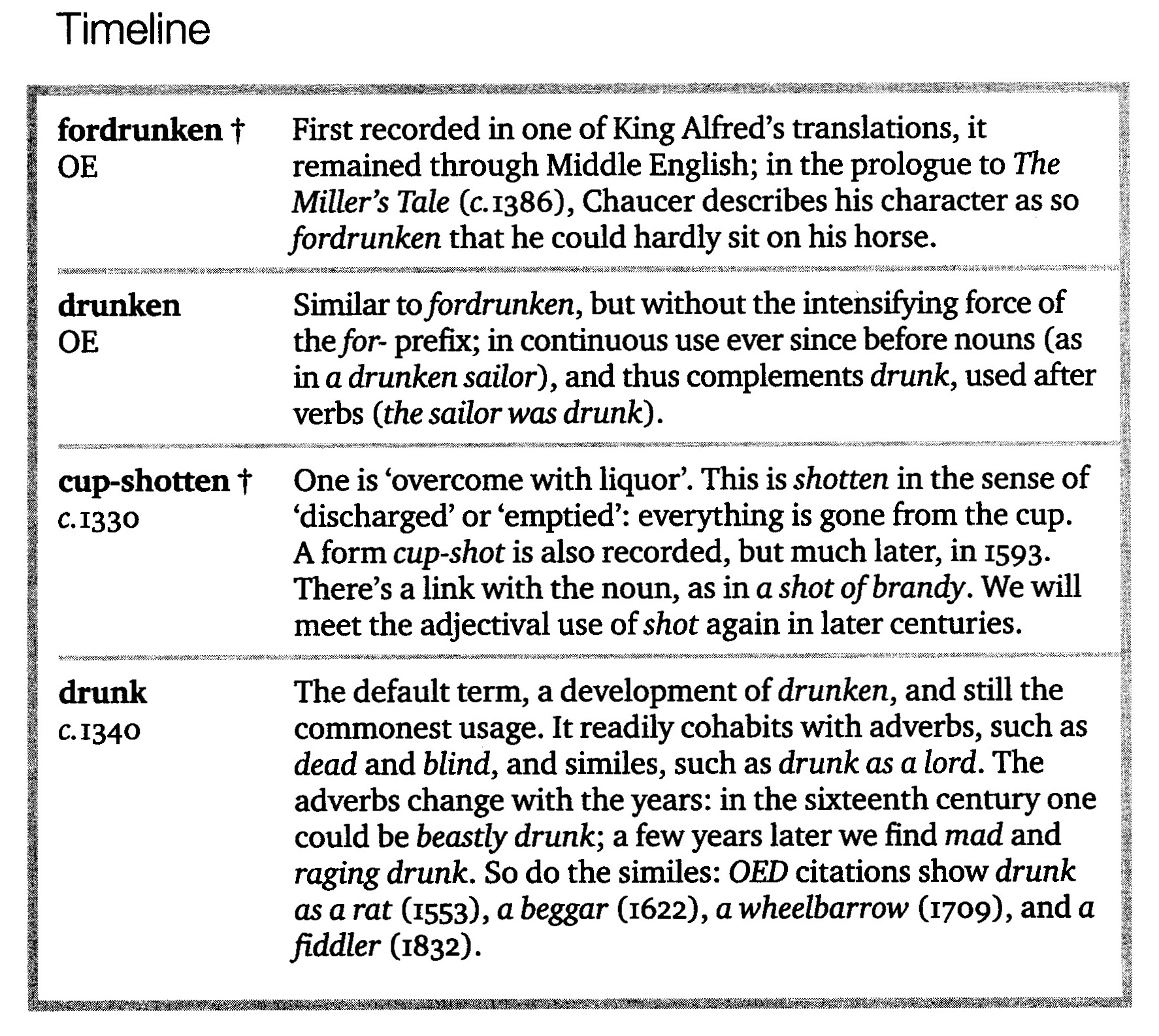 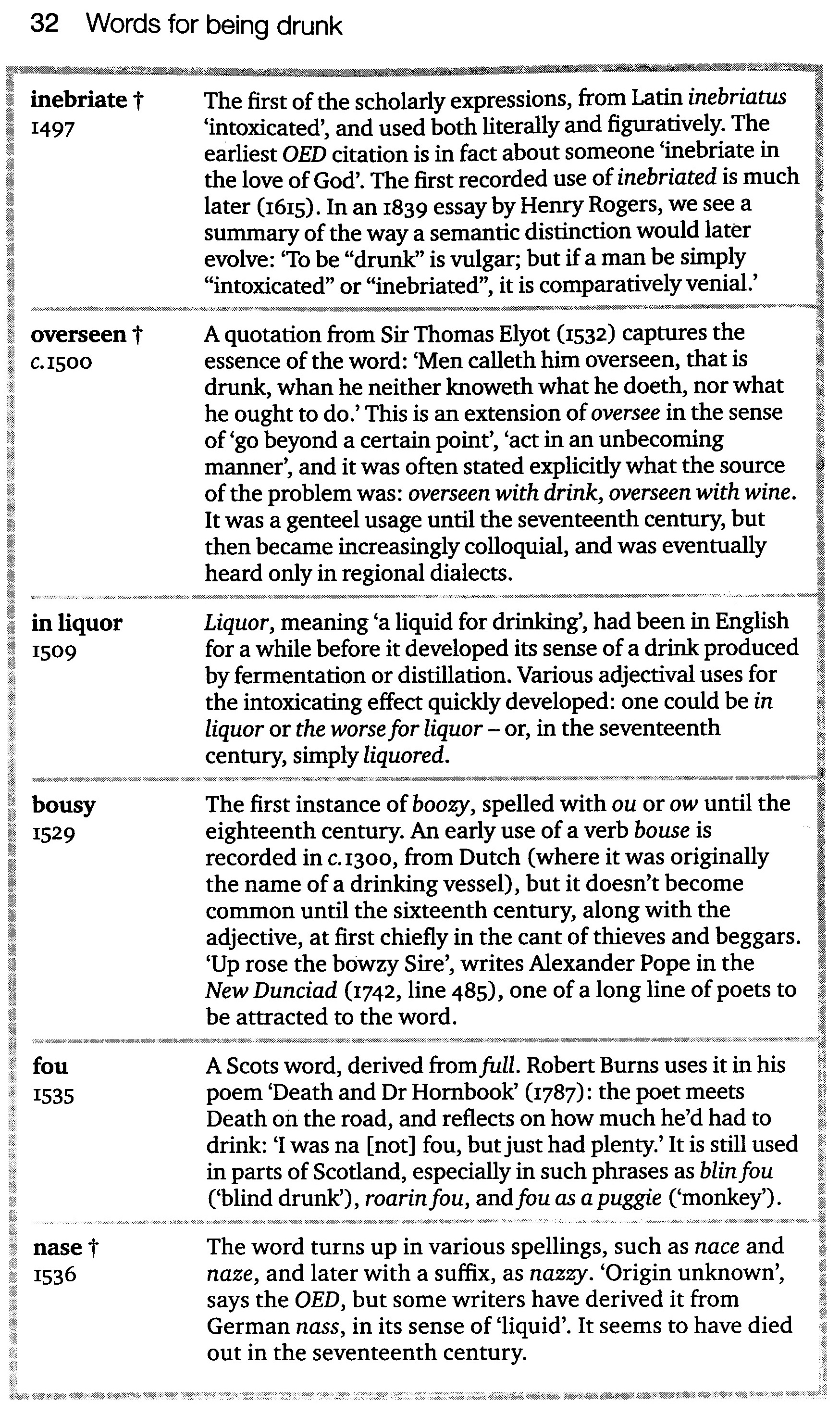 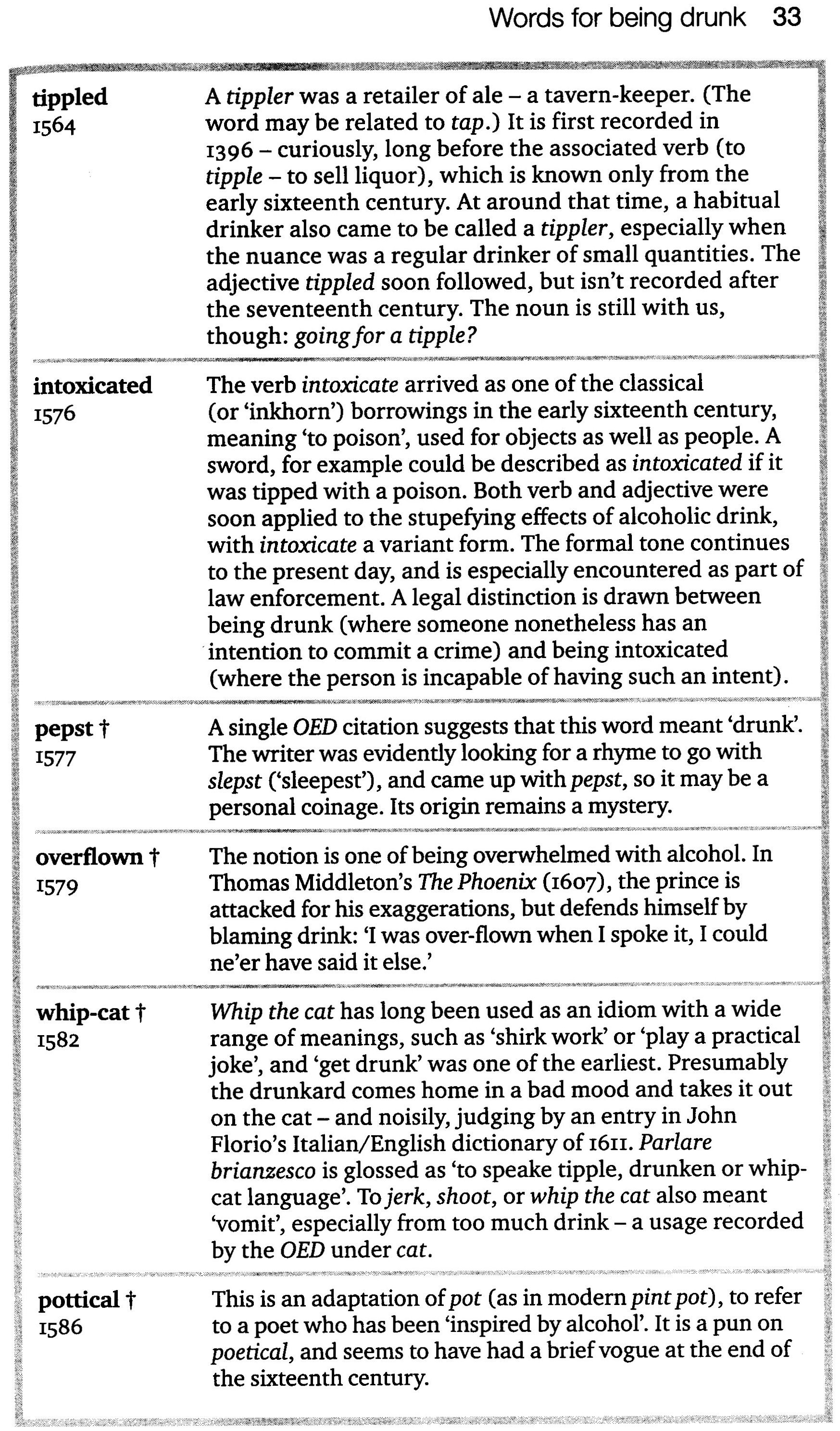 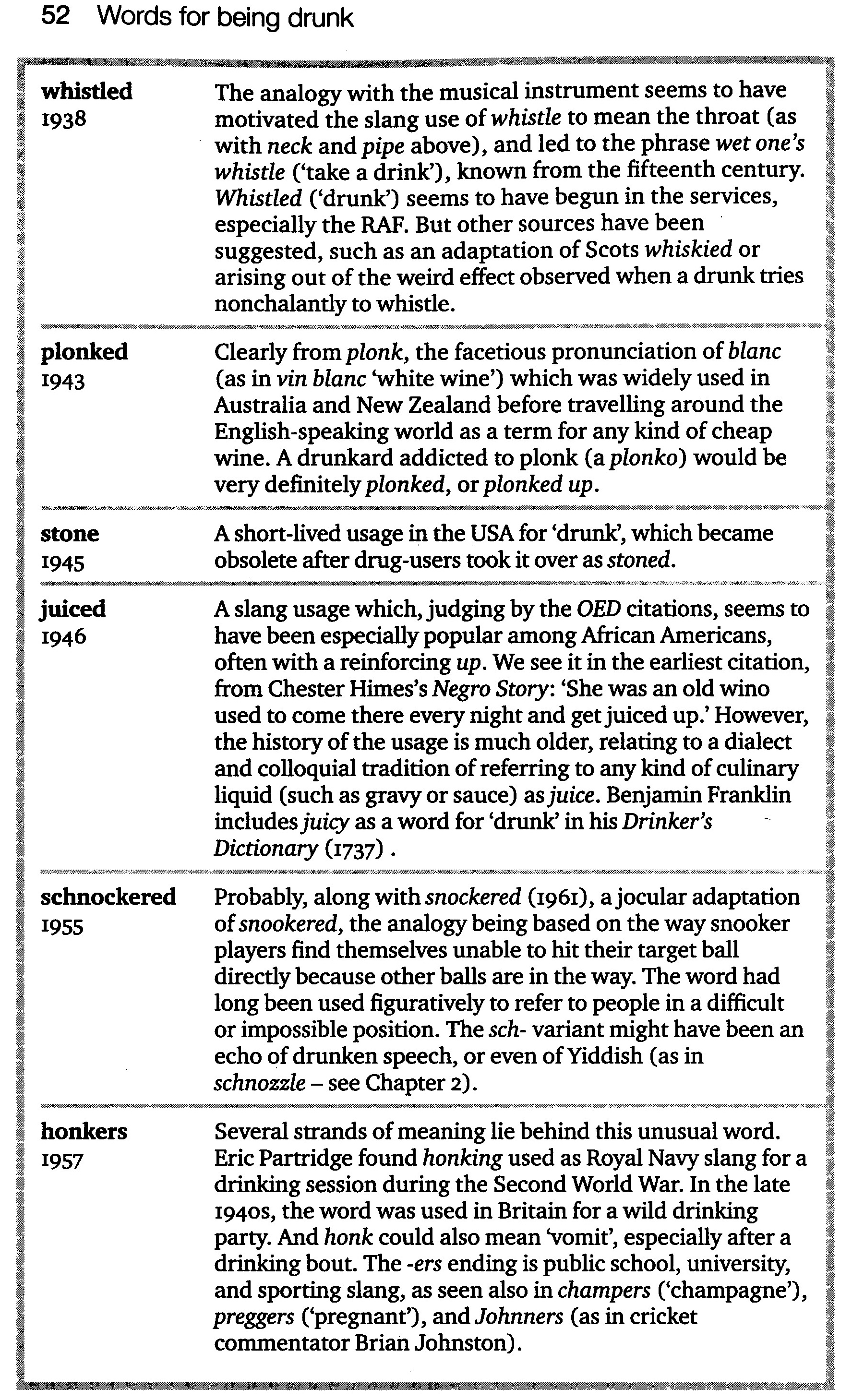 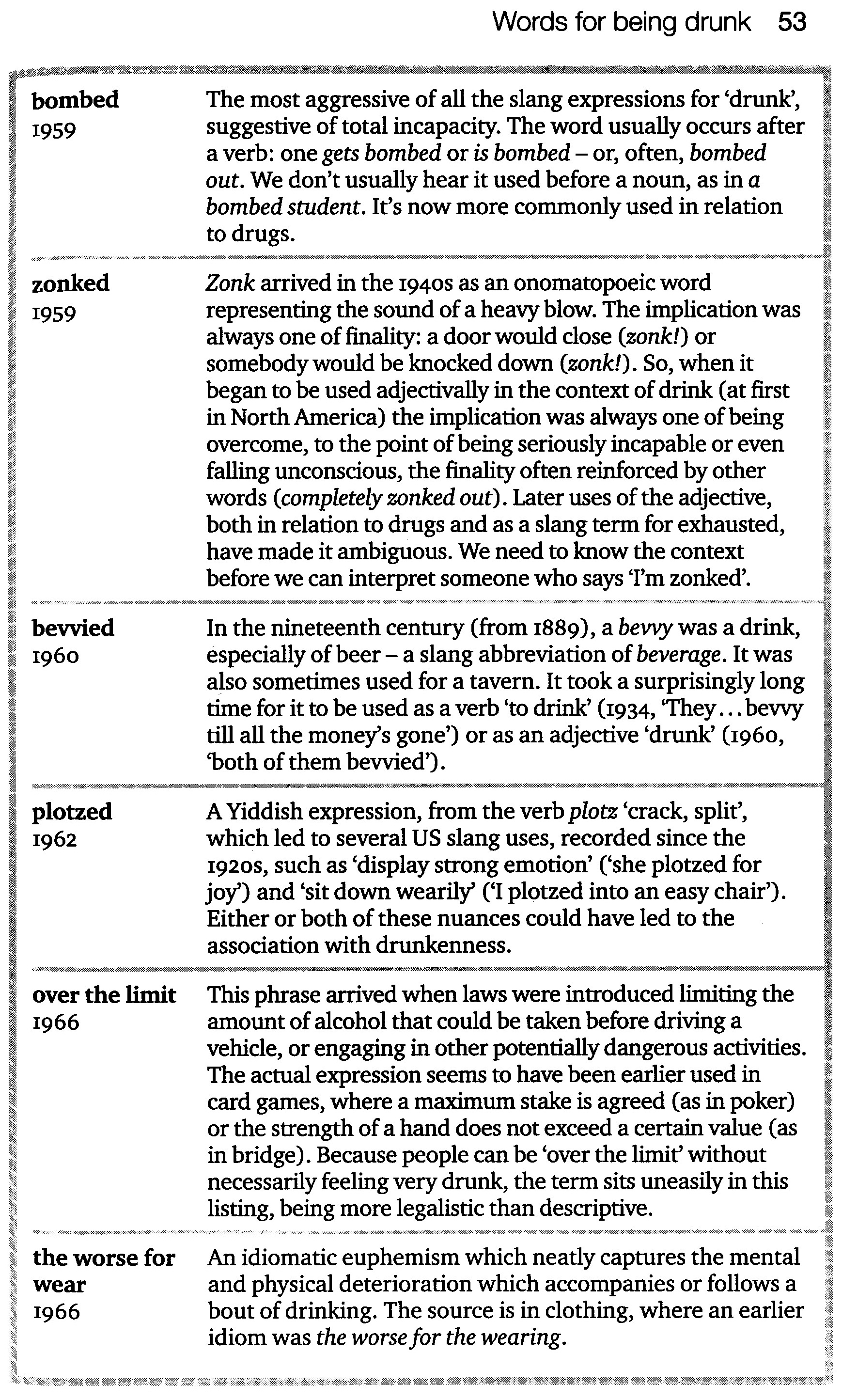 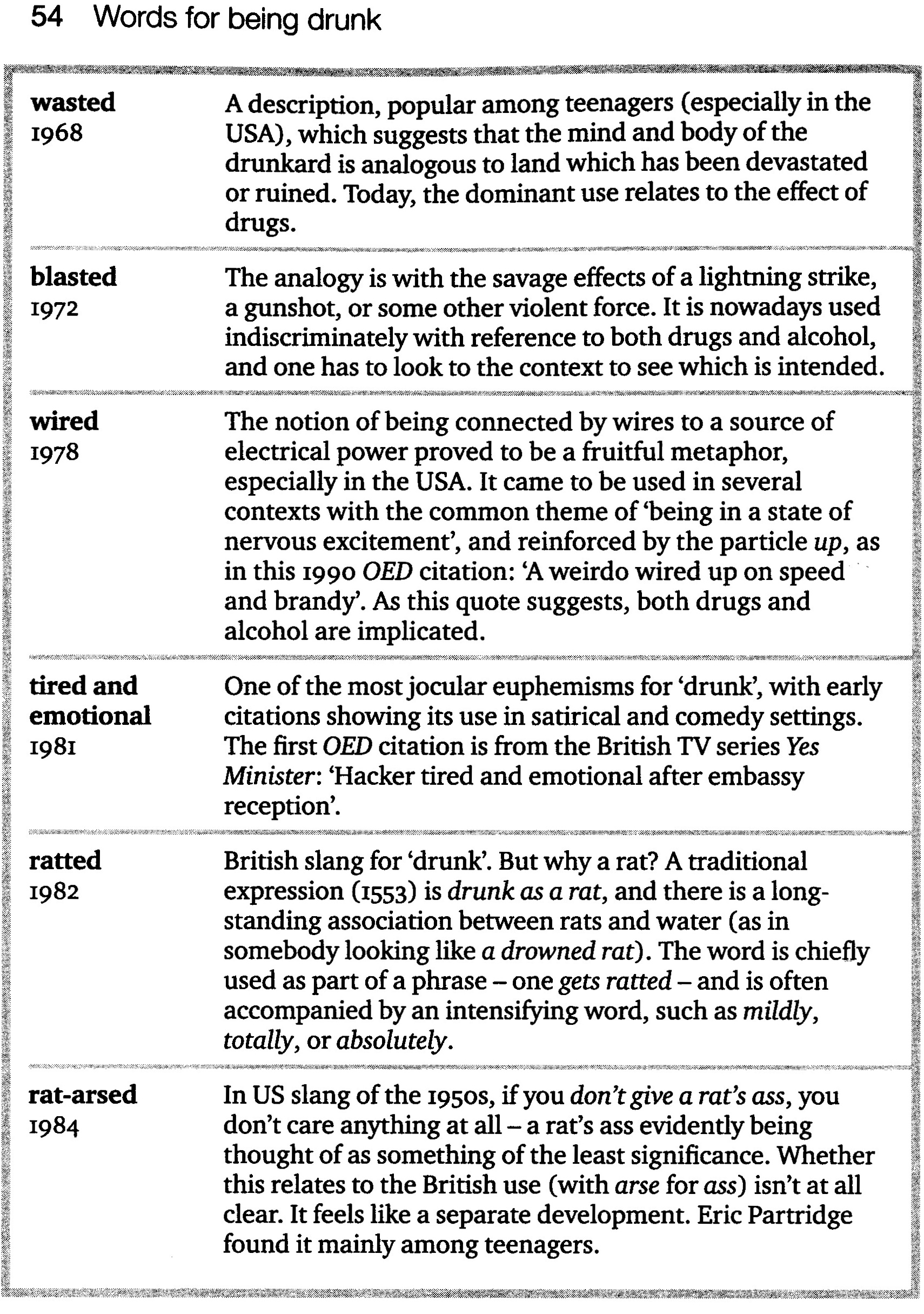 I snagged a copy of the buckram-clad Compact Edition of the OED about 35 years ago (complete with rectangular magnifying glass) and bought the Supplement when it came out in 1987; in 1995 I had an opportunity to explore the online OED, and did a lot of searches that are a delight to explore again via the page I constructed to introduce the online version W&L colleagues.

And today I bit whatever bullets were available and got myself a subscription ($90/year, a bargain) to the current online version of the OED, which includes the Historical Thesaurus. I look forward to further lexicographical explorations…

And if you’ve gotten this far in today’s post, here’s a Reward:

2 thoughts on “Words in Time and Place”