I’ve always kept an ear cocked for portentious words, those with more space on their insides than their exteriors might suggest. Sometimes they’re uncommon words, like mendacity or nugatory or tendentious… words that facilitate well-honed calumny, and (truth to tell) suggest that I am more literate than thou. Other words in the land of portent are more broadly familiar, but encode niceties of expression and fine distinctions of meaning, accessible to connoisseurs; Raymond Williams’ Keywords: A Vocabulary of Culture and Society, W.V. Quine’s Quiddities: An Intermittently Philosophical Dictionary, and Collins and Glover’s Collateral Language: A User’s Guide to America’s New War are three lexicons of this sort of verbal tesseractitude, each a catalog of explications rather than a collection of definitions. And of course there are portmanteau words and other idiosyncratic coinages, of which H. Dumpty famously said “I pays them extra and I makes them mean what I like”.

Today’s case-in-point has been tumbling in my consciousness all day today, gathering momentum as an explanation or enlargement of an issue that’s been on my mind: prestation is the word, and the issue at issue is my own long-running habit of (seemingly) giving away collations of information –texts, lists, sound files, images, books– on the slimmest of pretexts. “Informing others against their will” as my sigfile says, but what is it that lies behind this proclivity of mine? And whence cometh it, the behavior and the mot juste alike?

I first encountered the term ‘prestation’ in a graduate school course, not one I took myself but one that good friends of mine were in and talked about, in the way we talked about stuff in those dear dead days. The term is (and isn’t it obvious) French, and figures prominently in the work of Marcel Mauss. Here’s a nicely anonymous summary from Wikipedia, which saves us all a lot of time:

In his classic work The Gift, Mauss argued that gifts are never “free”. Rather, human history is full of examples that gifts give rise to reciprocal exchange. The famous question that drove his inquiry into the anthropology of the gift was: “What power resides in the object given that causes its recipient to pay it back?” (1990:3). The answer is simple: the gift is a “total prestation”, imbued with “spiritual mechanisms”, engaging the honour of both giver and receiver (the term “total prestation” or “total social fact” (fait social total) was coined by his student Maurice Leenhardt after Durkheim’s social fact). Such transactions transcend the divisions between the spiritual and the material in a way that according to Mauss is almost “magical”. The giver does not merely give an object but also part of himself, for the object is indissolubly tied to the giver: “the objects are never completely separated from the men who exchange them” (1990:31). Because of this bond between giver and gift, the act of giving creates a social bond with an obligation to reciprocate on part of the recipient. To not reciprocate means to lose honour and status, but the spiritual implications can be even worse: in Polynesia, failure to reciprocate means to lose mana, one’s spiritual source of authority and wealth. Mauss distinguished between three obligations: giving – the necessary initial step for the creation and maintenance of social relationships; receiving, for to refuse to receive is to reject the social bond; and reciprocating in order to demonstrate one’s own liberality, honour and wealth.

Hmmm, I think. Is this what I do, what I’ve always done, as long as I can remember? When I point somebody to a website (or, often enough, a whole bunch of websites) or press upon them books or inveigle them into listening to “just a few” musical examples or otherwise foist bits of my knowings upon them, is there a subtext of demand/desire for some kind of reciprocation? And have I known this for 40+ years, but never realized it as a recurrent pattern? Is this an essential part of my disquietude with teaching –that I wanted and expected and even craved reciprocal engagement from students and colleagues? Was I somehow wounded or disappointed when the response to my ‘gift’ was silence or indifference or bafflement or “will this be on the exam?” Yup, all that rings true, and it’s interesting to find a sort of resolution, and to recognize why the sigfile motto pleases me so.

Once I’d decided to hunt down the quiddity of prestation, I was launched on just the sort of sport I most enjoy, chasing through Google search results and the print resources in my home library, and of course through my own organic memory banks too. Dictionary definitions are basically pedestrian, and even the OED is rather pallid:

…a payment …especially a feudal due… The action of paying in money or service, what is due by law or custom, or in recognition of feudal superiority; a payment or the performance of a service so imposed or exacted; also, the performance of something promised…[but the Supplement adds a specifically anthropological sense]

A gift, payment or service that forms part of some traditional function in a society, given or due either to specific persons or to the group.

The term shows up in only a few sources in English, e.g. in the subtitle of Gloria Goodwin Raheja’s The Poison in the Gift: Ritual, Prestation and the Dominant Caste in a North Indian Village. It’s all over the place in French, not too surprisingly, mostly in the fiscal sense. And it even appears on t-shirts: 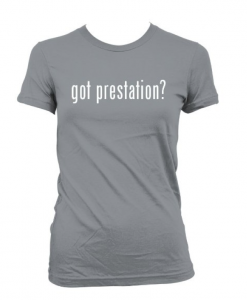 3 thoughts on “Word of the day”