Some of the profounder truths/more ineffable mysteries lurk in how things are named. Why ‘toothless’ for this image, asks Bryan: 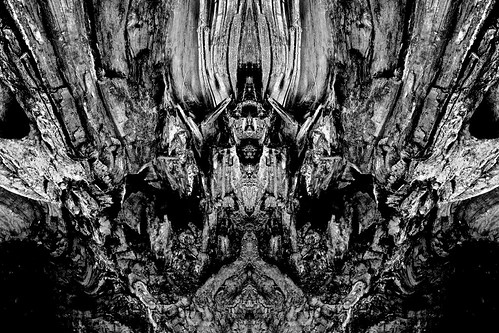 Part of the explanation has to do with the momentary flash of inspiration to which I’ve learned to attend as I’m processing images, and which I am happy to identify as macchia (“the total compositional and coloristic effect of an image in the split second before the eye begins to parse it for meaning,” more fully adumbrated in a posting from four years agone, and thanks to Teju Cole for the word). “Toothless” was the macchia that breezed through my mind on first glance at the original image (the right-hand side of the composite mirror image above): 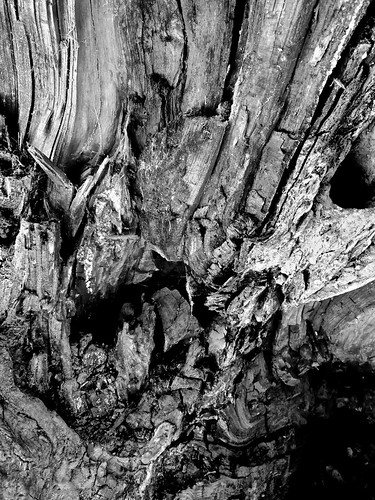 I see, or fancy I see, or saw and then couldn’t un-see an empty eye socket in upper center, and a jagged toothless black mouth on the left side about 2/3 of the way from the top… but as always YMMV. The symmetrical expansion of the original image reveals a very different face: the toothless mouth unfolds into a pair of black eyeholes, surmounted by a crown of vertical elements (feathers?), and susmounted by what seems to be a filigreed snout (which, John points out, isn’t showing any teeth, so still technically toothless).

John also suggested that the image might be flipped: 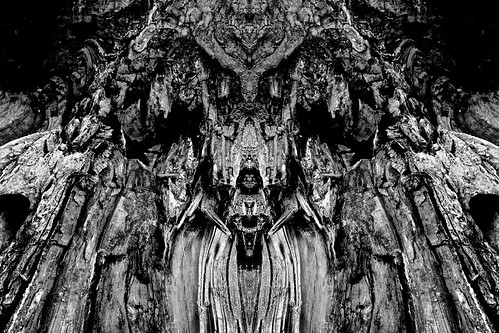 An altogether more vulpine visage emerges, not toothless at all, and the former feathery crown transmuted into a rather elegant broad-shouldered cloak.

It’s an essential component of the Homo narrans toolkit that things be given names to celebrate their essence, and perhaps to summon them (or protect against them) at need. But we must always heed Max Nigh’s Dictum: Just because we’ve named it doesn’t mean we know anything about it.