William Gibson’s blog has a pointer to a YouTube video that’s startling in its implications, and a nice run around the block in Dutch, too. Well worth 5 minutes to widen your paranoias.

That’s bass as in viol, not as in fish.

Reynaud Garcia-Fons is arguably world’s-best, but if you doubt it (or even if you don’t), get your hands/eyes/ears on Arcoluz, his 2005 Enja release (a trio, with Kiko Ruiz playing guitar and Negrito Trasante doing percussion). It comes with a DVD that’s a revelation, since you get to see how he gets those sounds out of a bass. The DVD is a marvel of camera work and editing. Amazon offers it, and it’s not cheap. But it’s really really worth it. Really.

n.b. that this posting owes a lot to my reading of Juan Cole’s 31 July “What is Hizbullah?”, and particularly to this paragraph:

Thus, a very large number of the Pushtuns in Afghanistan are sub-nationalists with a commitment to Pushtun dominance. They deeply resent the victory of the Northern Alliance (i.e. Tajiks, Hazara Shiites, and Uzbeks) in 2001-2002. A lot of what our press calls resurgent “Taliban” activity is just Pushtun irredentism. There are approximately 14 million Pushtuns in Afghanistan and another 14 million or so in Pakistan.

Consider this approximation to territory of ethnic groups in and around Afghanistan, and focus on the green ‘Pushtun’ territory: 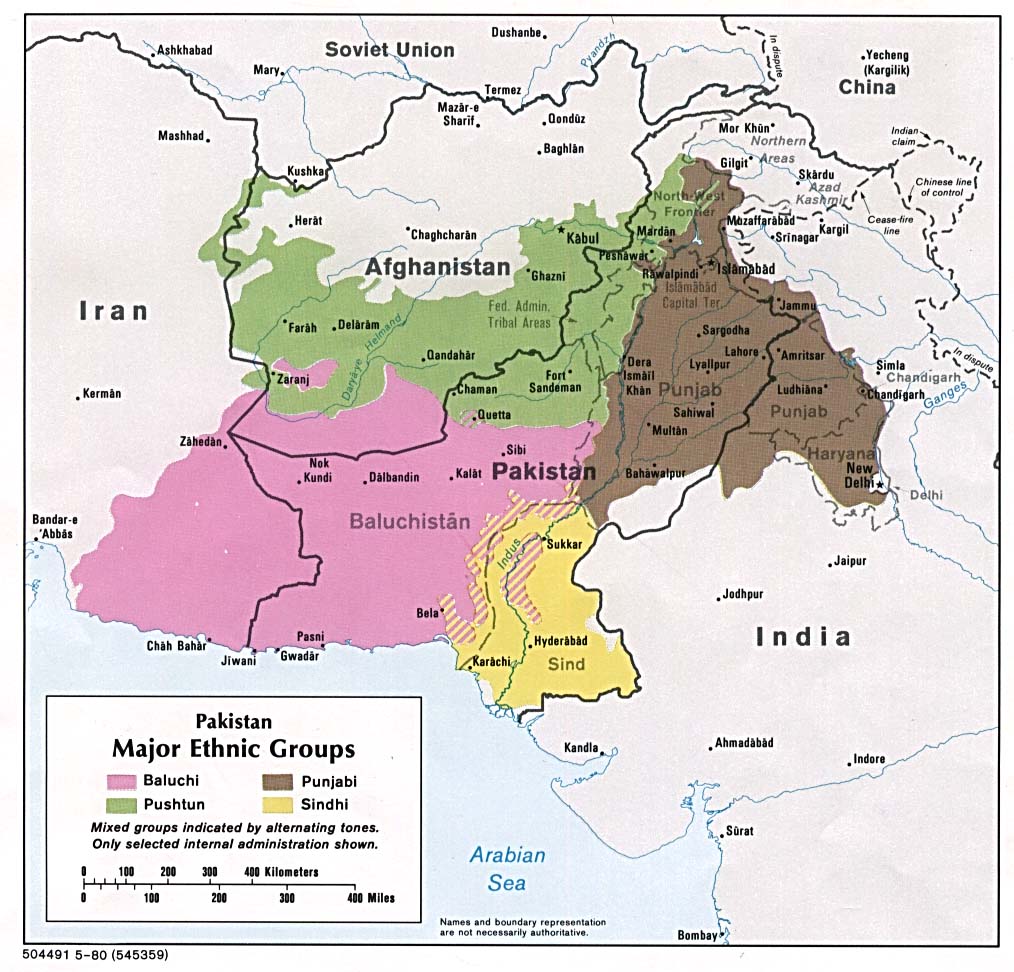 (from Wikipedia, and the Perry-Castañeda Library)

Now reflect on the struggles of the British Raj (and its successors) on the North West Frontier Province, mostly with Pathans/Pakhtuns (and sub’tribes’ like the Afridis of the Khyber Pass area). I think back to my own fascination of 35 or so years ago with Frederik Barth’s work on the Swat Pathan (Political leadership among Swat Pathans, 1965 or is it 1959?), from whence a bit of googling took me to David B. Edwards’ “Learning from the Swat Pathans: Political Leadership in Afghanistan, 1978-97” (American Ethnologist, Vol. 25, No. 4. [Nov., 1998], pp. 712-728), which includes this interesting springboard into rethinking yet again my own trajectory as an anthropologist (some emphasis added):

The 20 years of civil war in Afghanistan–20 years that have also seen an Islamic revolution in Iran, the collapse of the Soviet Union, and myriad tribal and ethnic conflicts– have been a time in which cultural anthropology has immersed itself in a series of insular debates over the nature and validity of the anthropological enterprise. And while the discipline as a whole has gained by being more self-conscious about modes of representation and how it ascribes authority, the debates about how anthropologists create texts have had pernicious effects, first, of isolating anthropology from other disciplines and larger international concerns and, second, of constricting research within anthropology by making some researchers leery of declaring anything in too authoritative a manner for fear of representing those among whom they have lived and about whom they write in a way that others might deem culturally insensitive, politically suspect, or simply naive.

The debates I have been discussing in this article predate the postmodern turn in anthropology, and I must admit that I have found it bracing to reread these works that I last read in graduate school in the early 1980s. There is a seriousness about anthropology’s ability to analyze events in the world, as well as a quality of nonironic engagement –with the people being studied and the potential larger significance of the debate itself– that I find missing in much anthropology today. (pp 726-727)

This excursion resulted from thoughts about the depths (or is it shallownesses) of misunderstanding of complexities and historical background that are endemic to the US government’s every move in the current unpleasantnesses. Daniel Levy (in a piece in Haaretz, “Ending the neoconservative nightmare”, 4 August) summarizes clearly: “An America that seeks to reshape the region through an unsophisticated mixture of bombs and ballots, devoid of local contextual understanding, alliance-building or redressing of grievances, ultimately undermines both itself and Israel…”

Our mass media and political creatures talk of “the Taliban” as if they were simply freedom-hating medieval fundamentalist fanatics, and tar them with the “terrorist” brush and the label of “bad guys” –no effort is made to understand from whence the movement springs, or to examine its historical precedents.

There are some useful correctives: Wikipedia on Taliban is a pretty good summary, especially taken (as Wikipedia articles generally should be) with the Discussion and History. The link to Wikipedia’s Pashtun article notes that “The Pashtuns are the world’s largest segmentary lineage (patriarchal) tribal group in existence…”, a fact not unrelated to the resilience of Pashtun/Pathan/Pushtun/etc in the face of what they see as outside interference in their affairs.

I have no interest in being an apologist for Taliban or Pathan or whatever, but “policy” based on ignorant labels and wilful neglect of historical context isn’t likely to produce constructive results. I found another article by David B. Edwards (“Mad Mullahs and Englishmen: Discourse in the Colonial Encounter”, in Comparative Studies in Society and History, Vol. 31, No. 4 [Oct., 1989] , pp. 649-670) which provides the historical background for the recently-resurrected image of the “Mad Mullah” that infests the mass media version of current events (whether in Afghanistan, Iraq, Iran, Lebanon…), and relates the tale of Winston Churchill’s North West Frontier journalism. The article, centered in events in 1897, has many points of contact with the present. Just a few quotations:

Establishing the enemy as fanatical denies him moral status and affords those whose moral superiority is thus affirmed a free hand in defending their interests. (pg. 655)

Like miracles, metaphors mediate between discontinuous domains of experience, make the inchoate subject to the determination of the familiar, and generally provide a moral ground to the experience of events. (pg. 656)

The effectiveness of metaphor stems less from the similarity between two objects than in the mutability of perception itself. Metaphors have the power to transform the real and make it seem to be something other than what it had always seemed before. They achieve their effect by violating the separation of objects and physical processes. They disrupt the categories by which we organize the world and, in doing so, fuel the suspicion that the world may not be as it appears and that our knowledge of it is less than what it should be. Thus, the potency of metaphor derives from the possibility that a resemblance recognized on the surface of language will cause a fundamental transformation in the way we perceive, organize, and express our experience of the world. (pp. 656-657)

In the search for up to date information on the Wily Pathan, I’m not sure how to evaluate The Talibanization of the North-West Frontier by Sohail Abdul Nasir (in the Jamestown Foundation Terrorism Monitor), which seems thoughtful and well-informed (noting, for example, that local Taliban are a nativist movement, “concerned with not only the enforcement of Sharia law, but also the waging of jihad against intruders [i.e., U.S.-led coalition forces] in Afghanistan”). The identity and connections of the Jamestown Foundation are somewhat suspect, but perhaps I should relax my discomfort level in the face of what seems to be clear reporting by Sohail Abdul Nasir, and simply hope that his perspective will inform those in Washington of whom I am generally critical. See voltairenet.org analysis of Jamestown Foundation, with this conclusion in the final paragraph:

…the Jamestown Foundation is only an element in a huge machine, which is controlled by Freedom House and linked to the CIA. In practice, it has become a specialized news agency in subjects such as the communist and post-communist states and terrorism. Although it publishes high quality information on issues that can be checked up, it does not hesitate to launch the most blatant imputations on the rest, thus providing neo-conservative think tanks with a world image that matches their ghosts and justifies their policy.

My inexhaustible search for the obscure and bizarre teaches new lessons every day, as I discover things I shoulda known about but didn’t. The title’s reference nods to the birthname of Baroness Elsa von Freytag-Loringhoven, neé Else Hildegard Ploetz, who came up in Charles Simic’s very diverting review of Dada (Making It New in the current NYRB):

…the legendary Baroness Elsa von Freytag-Lori[n]ghoven, who walked around New York with a wastebasket on her head, postage stamps stuck to her face, and her dress ornamented with children’s toys, tea balls, and other trinkets she swiped from Woolworth’s or found in the streets.

…so of course I went looking for more and found these:

all of which just goes to show that my Education continues.

One of the greatest culinary pleasures I remember from a lifetime of chowhounding is kuay teow, a fried-noodles-and dish that I first encountered more than 40 years ago as a Hokkien breakfast specialty in Sarawak. EatingAsia offers a wonderfully clear description and procedural photoessay. I’m already heating the wok…

I’ve never seen a clearer statement on the subject:

Here’s what’s driving the whole patent engine – public companies are held legally responsible to maximize profit for their shareholders. To the extent that if they fail to generate profit (or acceptably sufficient profit) they can be sued by shareholders. The board of directors is liable. Which drives public companies to squeeze every possible gram of cash out of any possible revenue stream. If they failed to get the patent for a product, and someone else managed to get it – and then came after the company – shareholders would be pissed. So, software patents are conceptually an arms race. Companies are filing patent applications for anything they can think of in order to both protect themselves from others doing the same thing, and to maximize profit by handing the patent to their lawyers and owning a market segment as a result.
http://www.darcynorman.net/2006/08/02/software-patents-and-legally-required-greed

In his practically inimitable fashion, Jon Udell interconnects problems and solutions and possibilities that provoke one to unexpected musings. This time it begins with the problems of relaying snippets of audio, but the broader context is the Grand Problem of ?whose responsibility should it be? to undertake analysis and management of Really Big Questions.

…while I endorse Shannon Brownlee’s analysis [9:13 RealAudio, and really worth a listen], I don’t buy her concluding appeal for a new federal agency to collect and analyze information about health care delivery and outcomes. I wouldn’t expect the government to do that any more than I’d hold Google and Microsoft and Yahoo! responsible for taming the cornucopia of general information and knowledge. We produce those goods. We’ll be rewarded when we make them well-structured, well-connected, and therefore discoverable. And we’ll be punished when we don’t.
(http://weblog.infoworld.com/udell/2006/08/01.html#a1496)

The Really Big Question in this instance is how to improve the tracking of medical information that bears on the quality of health care, including both (a) outcomes AND (b) effectiveness of treatment. Information gathering and analysis can’t be left to “the market” (that is, to health care insurers, drug companies, other profit-driven actors) –it needs to result in public information, and it has to be national in scope. What, I ask myself, is “government” for if not to perform such grand-scale tasks of data gathering, analysis, and communication?

I surely agree with Jon’s penultimate sentence, and with his prescription of “Will, common sense, elbow grease” as necessities, but I’m flummoxed by the task of parsing the pronouns –the ‘we’ and ‘them’. The WE is surely all of us, society as a whole, the prospective beneficiaries of improvement in the sorry state of health care. The referent of THEM is …well, I guess THEM is all those pesky datums that are ill-structured and mal-connected. How do we move from WE-as-you-and-I to a WE that embraces everybody? Not like this is a new question…