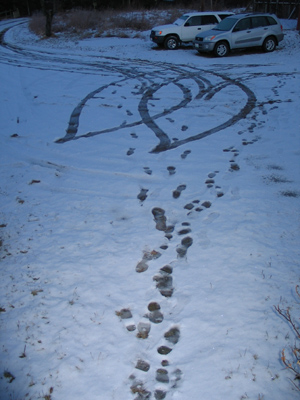 My friend Joan Larcom replied to a howyadoin message (which had included a pointer to Nova Scotia Faces) with this:

…The similarity I mentioned relates to your project on
Nova Scotia faces because I’ve only begun to think
about doing something similar with my family stuff.
This interest was piqued by an article in the NYT on
Dec 17th about Michael Lesy’s “Angel’s World” on
Angelo Rizzuto. Lesy is proposing “demotic”
photography or a closer look at family photos and
picture postcards. ‘UNpacking’ them sort of.

In the past, Mr. Lesy has ruffled some academic feathers by arguing that what he calls “demotic photography,” like family snapshots or picture postcards, deserves the same level of scholarly study traditionally given only to art photography… “my whole intention is to subvert the [art photography] canon… There are possibilities that go beyond the safe definitions of what an artist is and what the camera is used for. …Academics… deal with photographs as aesthetic, intellectual constructs, or as integers in philosophical or linguistic argument. That’s not all they are. They’re slippery and deeply emotionally charged. A photograph is a thing which, to use an old scholarly word, needs to be ‘unpacked.’ There’s the manifest content, then half a dozen layered contents.”
(NYT 17 Dec 2005 sec B pg 9)

I like the flavor of “demotic”, which underscores the everyday, personal, hands-on qualities of family photographs. A Google search for “demotic photography” gets just 3 hits (“vernacular photography” nets 24,000).
One of those (besides the one pointing to the NYT Lesy quote) is a 1993 article from The Nation, which includes this provocative bit:

the Dada contribution to art was the photomontage, assemblages of photographic fragments that more or less assume an unlimited supply of images no more valuable than the paper on which they are printed, and that are readily understood by everyone, since they form the vernacular visual vocabulary of the culture.

One seeks to link to bits of story, of narrative or myth or expression. Consider the page of found images from In the Booth at squareamerica.com, each a scrap of the past, and more or less decodable, thanks to a common “vernacular visual vocabulary.” Each image serves as a momentary intersection with another person’s life-space,and the reader can gather the hologrammatic bits into the beginnings of an original narrative. Lesy’s Time Frames: the meaning of family photographs (1980) is, even 25 years later, an inspiring example of the exploration of photographs as ethnographic materials. I need to search for other books in the same vein… one such is Marianne Hirsch’s Family Frames : photography, narrative, and postmemory, but I’m sure there are others I should be thinking of.
I’ve often espoused the notion that you can start learning from anywhere/anything and construct interesting and worthwhile experiences. The starting point maps to other things and before you know it you’ve contextualized that starting point in some larger phenomenon. The challenge is to capture that process of linkage, and then to turn its telling into something distributable.

When we stop seeing knowledge as an entity that is possessed within a person and start to cast it as a function of elements distributed across a system, we notice a dramatic impact on the education process: the educator becomes a supporter (not the center), the content is not as critical as the connections, learners find value in their aggregated perspectives, learners become content creators, and learning is continuous, exploratory and sustained (not controlled or filtered by only one agent).

This evening we took pictures of the process of making a favorite dish, hands down one of the most delicious ways to eat haddock (and not half bad with salmon, either). The procedure can be seen here, but the taste and smell just don’t digitize well. It’s an adaptation of a dish I first encountered in California about 25 years ago, but I’ve been making it so long that it’s pretty well assimilated, and the ‘Vietnamese’ part is the fish sauce –an acquired taste/smell, but once acquired, nothing else will do.

In a guest rant on the every-day-more-essential Language Log, Paul Kay contributes this lovely bit of skewering:

In “deconstructing” all historical texts and arguing that they merely express the power of the interests their authors represent, postmodernists apotheosize the obstacles to objectivity rather than combating them. [Michiko Kakutani] cites in this connection an elegant line of Stanley Fish’s: “the death of objectivity ‘relieves me of the obligation to be right’; … it ‘demands only that I be interesting.'”

I replied to my son John’s question about what I was up to with music these days, and it seems like something blogworthy, so snip:

I haven’t had my mind very firmly on music in the last few months. I was playing a lot while we were staying at Scott & Judy’s in VA (after the house was sold), and I’ve now got a good array of instruments where I can reach them, but other things have intruded, like the Nova Scotia Faces –which if I do say so myself, is getting to be a pretty remarkable document. If you haven’t looked lately, nsfaces.schtuff.com is the main entry, and I’m now getting to more interstitial writing …but still scanning a lot every day.
So I’ve done nothing systematic about music in the last 4 months; a lot has been leaking in via mp3 but that tends to be bits of preposterosity, not coherent bodies of stuff that one might study. I have some thoughts about doing that sort of systematic stuff, but the question is one of medium: the problem of managing the digital rights, and not stepping beyond Fair Use if I’m making something for distribution. I’m not sure that the world really wants the didactic, which is the default mode for the retired prof. There are so many really wonderful web-accessible radio stations that I’m not sure there’s an open niche for what I might do with my collections –but that’s really a matter of my having not yet realized what the empty niches are. So still thinking about it…
To some degree that’s part of the reequilibration consequent upon not being in the ed biz anymore. For so many years I passed much creativity through the filter of teach-a-course, and was basically dealing with captive audiences and institutional trammelments. Free of those silly bonds now, I’m having to reinvent what it is to Learn, and I love it. I don’t know that there’s any reason for me to relearn or reinvent what it is to Teach …certainly not in any sort of institutional context anyhow. I’m so done with that.

Why has it taken me this long to encounter The Diary of a Nobody by George and Weedon Grossmith? I stumbled on it via a posting to Crooked Timber by Chris Bertram, in which he quotes this wonderful example of dudgeon gone awry:

I left the room with silent dignity, but caught my foot in the mat.

Seems to me that Mr. Pooter (who is, we see, in the public domain) ought to have the Pepys treatment, and so come to life again in the blogosphere, where he can do the most good.
…and a few minutes later, thanks to Google, I find that, sure enough, somebody has already done it! Bless whoever it is, thrice over.