This adventure into the word books on my shelves began on March 21 and has gathered steam on its downhill run, but snowman-like it has also swept lots of nearby materials into its gravitoid mass.

gravitoid appeared out of nowhere, as a nonce word [or occasionalism]: “a word coined for one single occasion only…”, “a lexeme created for a single occasion to solve an immediate problem of communication” (Wikipedia) “…term coined by James Murray],” but also, as Google tells us, “…A jumping puzzle game in space! Use gravity to your advantage and travel through the stars/galaxies/cosmos…” ” …truly settling matter in coastal waters [vs. colloids]…” “…an upcoming physics puzzler set in space, and developed by the folks over at Endless Tea Studios. It sees you, as an astronaut, trying to survive amongst the stars as you hop from planet to planet using gravity to help you…”

Well, so it goes, as Vonnegut says. I see no obvious end to this Project, since more and more relatable books keep leaping out at me and snuggling up to one another, demanding my attention and reminding me that I’ve been word-smitten all my life. I can certainly claim this linguistic territory as a realm tangent to anthropology, and even as a legit branch of Nacirema and Naidanac studies.

Insofar as there is method in this madness, it seems to involve some combination of early-morning thoughts (scrawled on bits of paper before forgotten or superceded), serendipitous bibliology, pilings-up of candidates, and results of googlings. Today’s bit of paper has these entries:

and that’s more than enough inspiration for today’s blog post.

I’m guessing that ‘bunny boiler’ is as novel/incomprehensible to most of whatever readership this post may have as it was to me. I found it as the result of a search for ‘catchphrase’, which I was impelled to by looking at Eric Partridge’s A Dictionary of Catch Phrases, of which I have the 1977 edition (Amazon offers the 1992 edition), and reflecting that such dictionaries have shelf life [the OED dates the first example of that phrase to 1927: “Manufacturing Confectioner Jan. 12 (heading) What is the shelf life of your hard candy?”]… and then looking for some more contemporary resources, and so finding a list of English (well, American) idioms that included ‘bunny boiler’, which I’d never encountered. And so: bunny boiler: An obsessive and dangerous female, in pursuit of a lover who has spurned her. Ew. Almost sorry I asked, but its derivation is from the 1987 film Fatal Attraction (which I’ve never seen) …

The phrase comes from the plot device whereby Forrest, in a fit of frenzied jealousy, boils her erstwhile lover’s daughter’s pet rabbit… At the time that the phrase first came into general use it referred to someone unable to remain rational at the end of a romantic relationship. Very quickly that usage became moderated and it came to be used, often with some degree of irony, in much less extreme situations. Any needy, possessive or even just mildly annoying woman is now liable to be described as a ‘bunny boiler’.

And there we have it, the whole /ball of wax/ of linguistic invention, complete with misogyny and irony and humo[u]r and Grand Guignol rolled into one. And I missed it, by being not particularly well-connected to Popular Culture. And so reflect that I miss a lot of Pop Culch references by being a non-participant in the lexico-fertile social media of the Facebook and the Twitter. Some Nacirema ethnographer I am, to ignore the Media which are the Message…

Here’s a page from Partridge 1977, reflecting the [notably British] linguistic world of 40+ years ago: 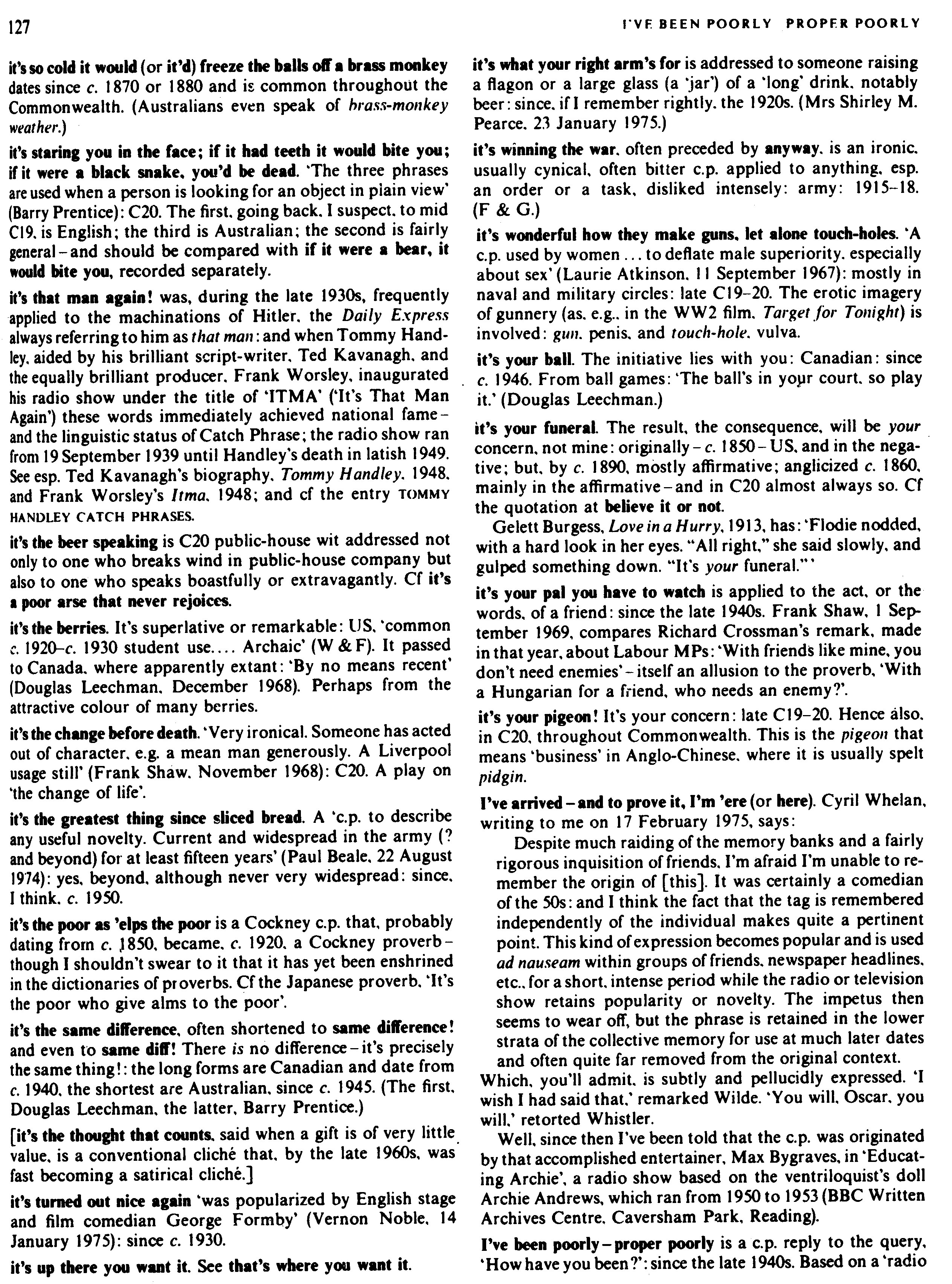 Here we skate perilously close to the field of slang, which needs its own separate treatment in future posts. For the moment, let’s go back to today’s slip of paper and follow Ferdinand de Saussure (1857-1913) in distinguishing langue and parole: “language: Saussure intended the term to mean internal arrangement and relationship of rules understood by a social group, however, rarely thought of in everyday life…” (Wikipedia), and parole: language as she is spoke by folk. The latter encompasses idioms, jargon, memes, dialect and so on, where the real fun is, in the scum on the top levels of the roiling cauldron. The sober realms of etymology and *PIE and OED definition surely have their charms, but the rubber meets the road in the pragmatics of metaphors and allusions and in-jokes and synecdoche.

To finish off today’s post, let’s take a look at Mark Forsyth (The Inky Fool) The Etymologicon: A Circular Stroll Through the Hidden Connections of the English Language (Amazon blurb: “a completely unauthorized guide to the strange underpinnings of the English language”)