Being just about to journey to Boston for a prostatectomy, it’s perhaps a good moment to reflect on what I’ve been up to lately, and maybe not so lately too. Here is some of the current thinkage.

I have zero personal history of hospitalization or, indeed, of anything but robust good health: no serious injuries, no experience of pain or physical inconvenience beyond the occasional back spasm, minimal contact with health care systems and their priests and acolytes. I don’t know what to expect from anesthesia or its aftermath: will I still be me? I’m not sure just what challenges I’ll encounter during “recovery” from the surgery, though one hopes for few and those readily overcome.

In the 11 1/2 years since retirement (back in September 2005) I’ve had a wonderful time doing pretty much as I pleased, reading omnivorously, walking, playing (mostly solitary) music, doing photography, sorting through and (selectively) resuming work on long-run enterprises, occasionally venturing to the shop for woodworking projects, traveling some, reconnecting with people and places of the past, and generally working on figuring out What It’s All About. 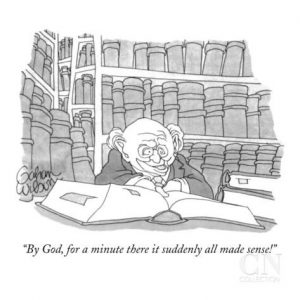 If there’s anything missing from this mostly-blameless recreation, it’s Audience. The best thing about being a teacher and a librarian was having a constant stream of people to talk with, to pass my discoveries along to, and to collaborate with in assorted constructions. Such interlocutors have been pretty thin on the ground during the last decade, except for occasional visits and visitors and my contacts via electronic media. Of course that’s mostly my doing (or not-doing) and reflects my ineptitude at developing new sodalities.

I do wish I’d been cleverer and more assiduous in using the Web as a medium for gathering and contextualizing and promulgating. My tendency has been to make a lot of pointers but then to skimp on explaining why anybody should thread their way through forests of scantily explicated hyperlinks. The 50th Reunion pages were an effort to entice my Harvard classmates into investigating the tangled webs of my doings, but I have little evidence that anyone was ever inviegled. Likewise the topical links at the head of this blog page (Brisées et bricolage, Quotations, Zotero, etc.), which display all sorts of fascinations but are mostly of interest and use to myself. I sometimes feel that I’m one of the few people still entranced by the blogosphere and following RSS feeds for a lot of blogs, an old dog who disdains new tricks (I’ve never been tempted to Facebook or Twitter, and NOW I know what it was that I was leery of). And maybe the world of the interwebs and hypertext aren’t really the universal solvents I imagined 20+ years ago, when the World was New. Maybe the medium of the codex book is still, or again, where it’s at.

The series of Blurb books I’ve produced since July 2015 has loosened a logjam of tangled projects and nudged me to think about legacy—about the meanings tied up in the stuff I’ve accumulated, and about what I might do to prepare for its eventual disposition. I’ve been a collector all my life, and harbor materials lovingly gathered across most of my sprawling interests. Each thing (book, LP, mp3, video, CD, DVD, instrument, photograph, downloaded image, electronic device, tool, scrap of realia, nubbin of memory, screed of text) fits somewhere into a (or is it THE?) personal saga, and so is an element in the grand Narrative that lives in my head. I suppose everybody has kindred arrays of stuff, and I could only wish that everybody gets as much pleasure from exploring their hoards as I do from spelunking through mine. It’s sobering to consider that the Indra’s Net [as Wikipedia summarizes: “a metaphor for the complex interconnected networks formed by relationships between objects in a system”] that organizes my mental world goes when I go, unless I somehow manage to build and promulgate distributable versions of what I’ve known, thought, imagined, accumulated. Not that there’s any market for such self-indulgent gallimaufries, but one doesn’t want to leave too much of a mess, and exculpatory discourse is at least a form of context-building.

Putting those Blurb books in one place (large files, so download to view):

Others are in the pipeline.

So we’ll see what emerges once I’m home again. I hope for a lot more photographic work and study, for new musical inspirations, for heaps of new books to read and episodes to watch, for many miles of roads and trails, and of course for culinary epiphanies.