I’m thinking that an appropriate Goal for the year is to work at gaining more control over the many threads of my own personal Narrative. This means sorting out and interconnecting a lot of stuff in many formats and disparate media (images, papers, html documents, sound files, vinyl records, CDs, videos, books, realia… more, and more varied, than you can imagine…), partly so that I can navigate it better myself, and partly because somewhere in there is legacy (though it’s not clear to whom, or for what). I made some pretty energetic beginnings in 2006, messing with timelines, quarrying Nova Scotia Faces, and starting on 45 years of negatives from my several lives as a photographer, but the coherence of it all is arguable, or at the very least, a subject for construction. I’m not really sure how to set about this Odyssey, other than casting off and seeing where the winds take me (and tracking waypoints via this blog), but a convenient organizing principle might be an exploration of narrativium, a Substance instantiated (as far as I know) in The Science of Discworld (Terry Pratchett, Ian Stewart and Jack Cohen [three volumes: 1999, 2002, 2006])

Our minds make stories, and stories make our minds. Each culture’s Make-a-Human kit is built from stories, and maintained by stories. A story can be a rule for living according to one’s culture, a useful survival trick, a clue to the grandeur of the universe, or a mental hypothesis about what might happen if we pursue a particular course. Stories map out the phase space of existence (II: 327).

A little narrativium goes a long way: the simpler the story, the better you understand it. Storytelling is the opposite of reductionism: 26 letters and some rules of grammar are no story at all. (I: 93)

Narrativium is powerful stuff. We have always had a drive to paint stories on to the Universe. When humans first looked at the stars, which are great flaming suns an unimaginable distance away, they saw in amongst them giant bulls, dragons, and local heroes. This human trait doesn’t affect what the rules say — not much, anyway — but it does determine which rules we are willing to contemplate in the first place. Moreover, the rules of the universe have to be able to produce everything that we humans observe, which introduce a kind of narrative imperative into science, too. Humans think in stories…. (I: 11)

Humans add narrativium to their world. They insist on interpreting the universe as if it’s telling a story. This leads them to focus on facts that fit the story, while ignoring those that don’t. (I:233)

…humans seem to need to project a kind of interior decoration on to the universe, so that they spend much of the time in a world of their own making. We seem –at least at the moment– to need these things. Concepts like gods, truth and the soul appear to exist only in so far as humans consider them to do so… But they work some magic for us. They add narrativium to our culture. They bring pain, hope despair, and comfort. They wind up our elastic. Good or bad, they’ve made us into people. (I: 166)

Our children have been hearing stories since they recognized any words at all, and by three years old they are making up their own stories about what is happening around them. We are all impressed by their vocabulary skills, and by their acquisition of syntax and semantics; but we should also note how good they are at making narratives out of events. From about five years old, they get their parents to do things for them by placing those things in narrative context. And most of their games with peers have a context, within which stories are played out. The context they create is just like that of the animal and fairy stories we tell them. The parents don’t instruct the child how to do this, nor do the children have to elicit the ‘right’ storytelling behaviours from their parents. This is an evolutionary complicity. It seems very natural –after all, we are Pan narrans— that we tell stories to children, and that children and parents enjoy the activity. We learn about ‘narrativium’ very early in our development, and we use it and promote it for the whole of our lives. (II: 152)

Narrativium is not an element in the accepted sense. It is an attribute of every other element, thus turning them into, in an occult sense, molecules. Iron contains not just iron, but also the story of iron, the history of iron, the part of iron that ensures that it will continue to be iron and has an iron-like job to do, and is not for example, cheese. Without narrativium, the cosmos has no story, no purpose, no destination. (III: 1-2)

It looks like Ian Stewart and Jack Cohen are the source of the coinage Pan narrans, of which they say

We are not Homo sapiens, Wise Man. We are the third chimpanzee. What distinguishes us from the ordinary chimpanzee Pan troglodytes and the bonobo chimpanzee Pan paniscus, is something far more subtle than our enormous brain, three times as large as theirs in proportion to body weight. It is what that brain makes possible. And the most significant contribution that our large brain made to our approach to the universe was to endow us with the power of story. We are Pan narrans, the storytelling ape. (II: 325)

…if you understand the power of story, and learn to detect abuses of it, you might actually deserve the appelation Homo sapiens. (II: 330) 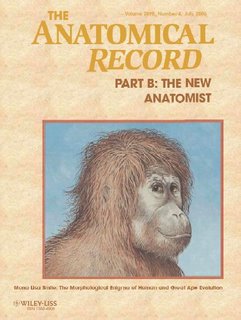 …and while we’re on the subject of close relatives, take note of the Orangutan Connection, via a blog posting that references Mona Lisa Smile: The Morphological Enigma of Human and Great Ape Evolution, The Anatomical Record (Part B: New Anatomist) 289B: 139-157