Word books are often curious, in one or another of the OED’s senses:

16 a. Deserving or exciting attention on account of its novelty or peculiarity; exciting curiosity; somewhat surprising, strange, singular, odd; queer. (The ordinary current objective sense.)
1715 J. Richardson Ess. Theory of Painting 100 This is very Particular, and Curious.
1719 J. Richardson Sci. Connoisseur 204 What is Rare, and Curious without any Other consideration we Naturally take Pleasure in.
1769 E. Burke Observ. Late State Nation 52 A most curious reason truly!
1807 G. Crabbe Parish Reg. iii, in Poems 115 No curious Shell, rare Plant or brilliant Spar, Intic’d our Traveller.
1868 C. W. Dilke Greater Brit. II. iv. 163 Seated in the piazza..I had before me a curious scene.
1888 J. Bryce Amer. Commonw. III. xc. 251 I give here a few of the more novel or curious provisions of the Constitution of California of 1789.

One from the shelves is all-of-the-above: Polyglot’s Lexicon 1943-1966, ascribed to Kenneth Versand, with a Preface by Kenneth Schlossberg (1973) (“[Portions] originally compiled by the Research Committee on New Words of the American Dialect Society and by G. & C. Merriam Company … [and] published annually from 1943 through 1966 in the Britannica book of the year.”).

This purports to be a presentation of “new words, new meanings, extended meanings of old words, or combinations of old words”, arrayed by year, by Science, by Politics, by Grammar (nouns, verbs, adjectives) and so on. About 2/3 of the pages are line-printer output, indicating that this was one of those early uses of mainframe computers to deal with text (which takes me back to the days of Phil Stone’s General Inquirer Project at Harvard, “a computer-assisted approach for content analyses of textual data”). The original input material would have been on punch cards (lots of punch cards), and the computer’s task was to sort the fields of the cards and output ordered lists. Here are a few page images to ponder: 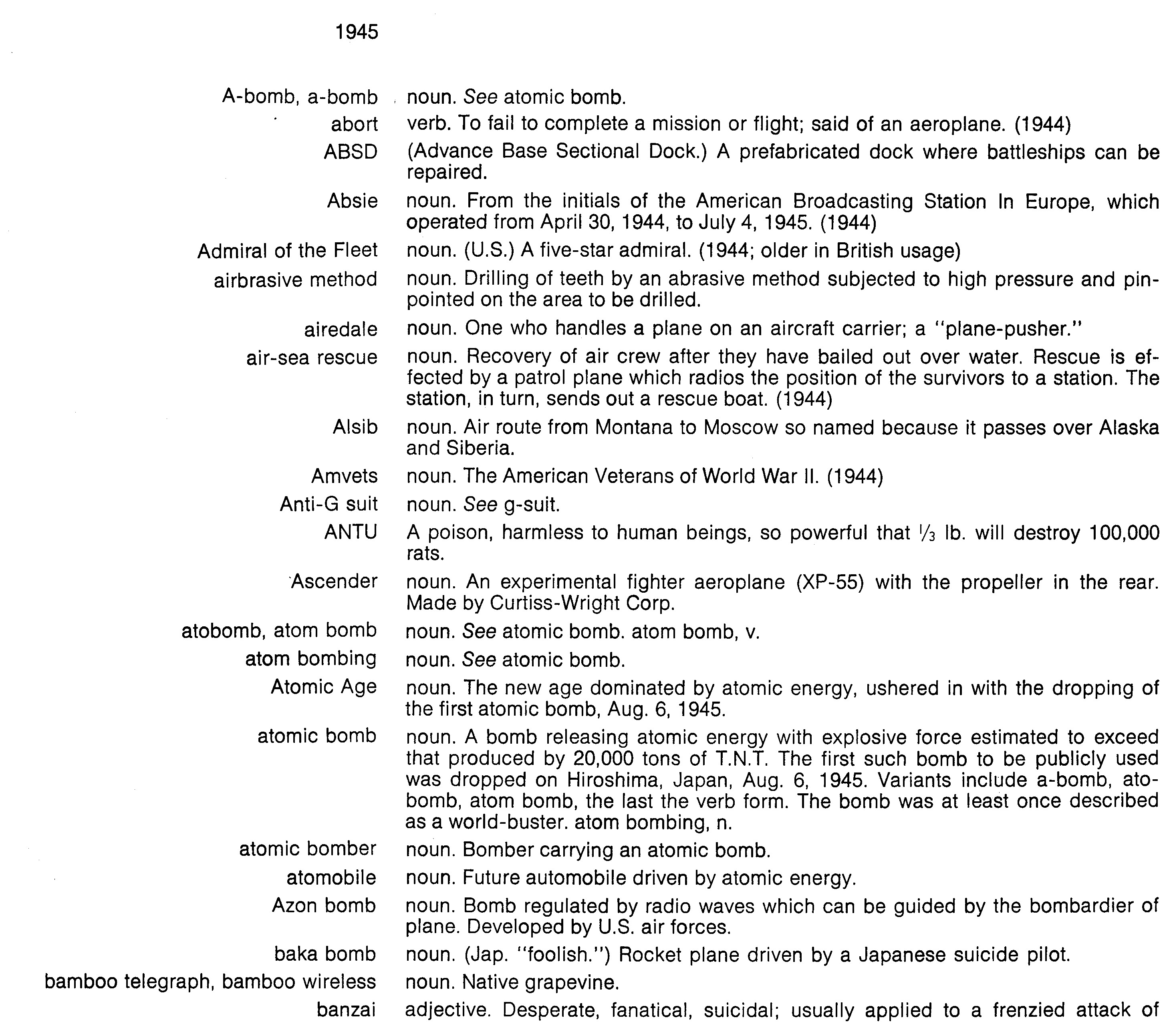 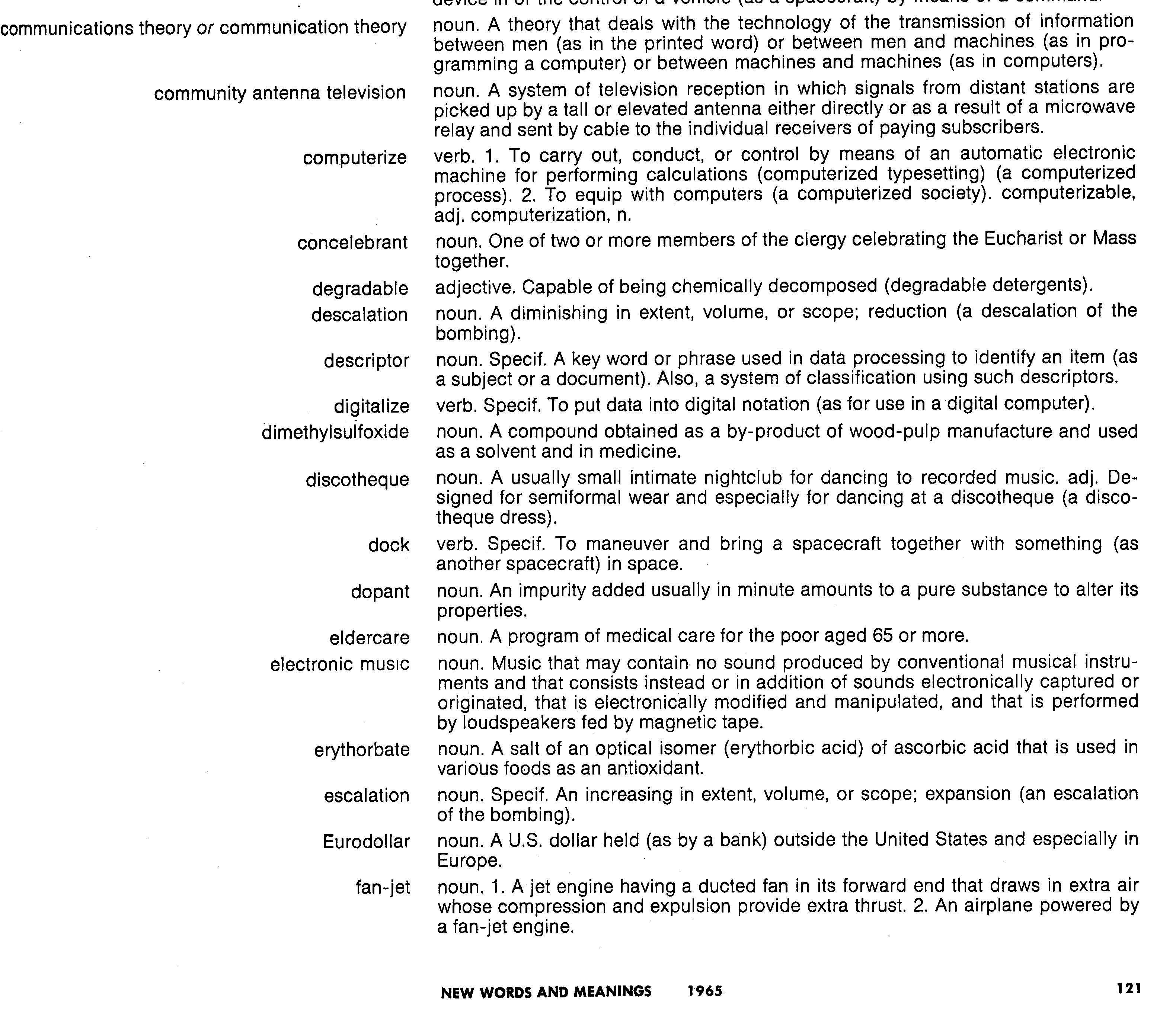 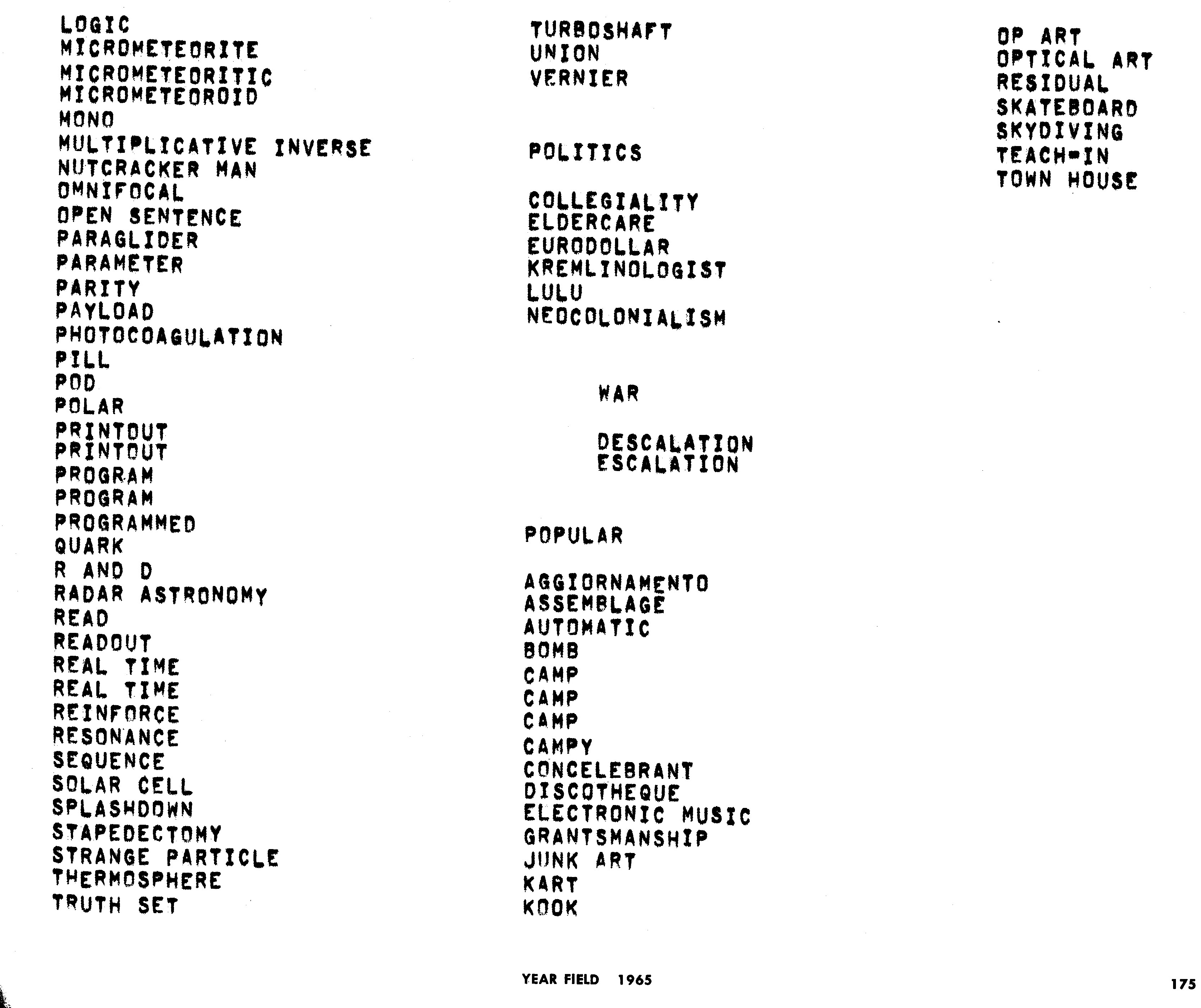 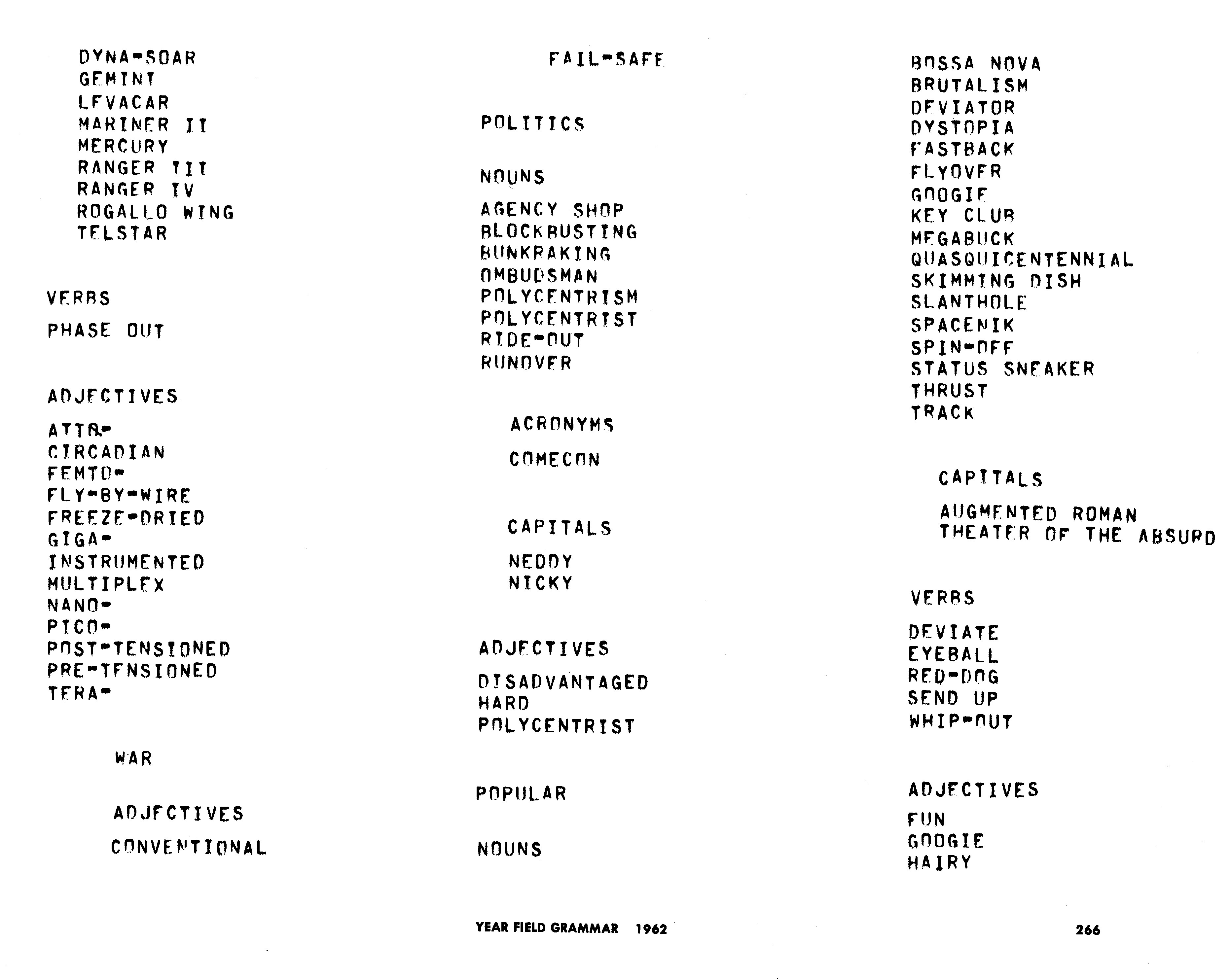 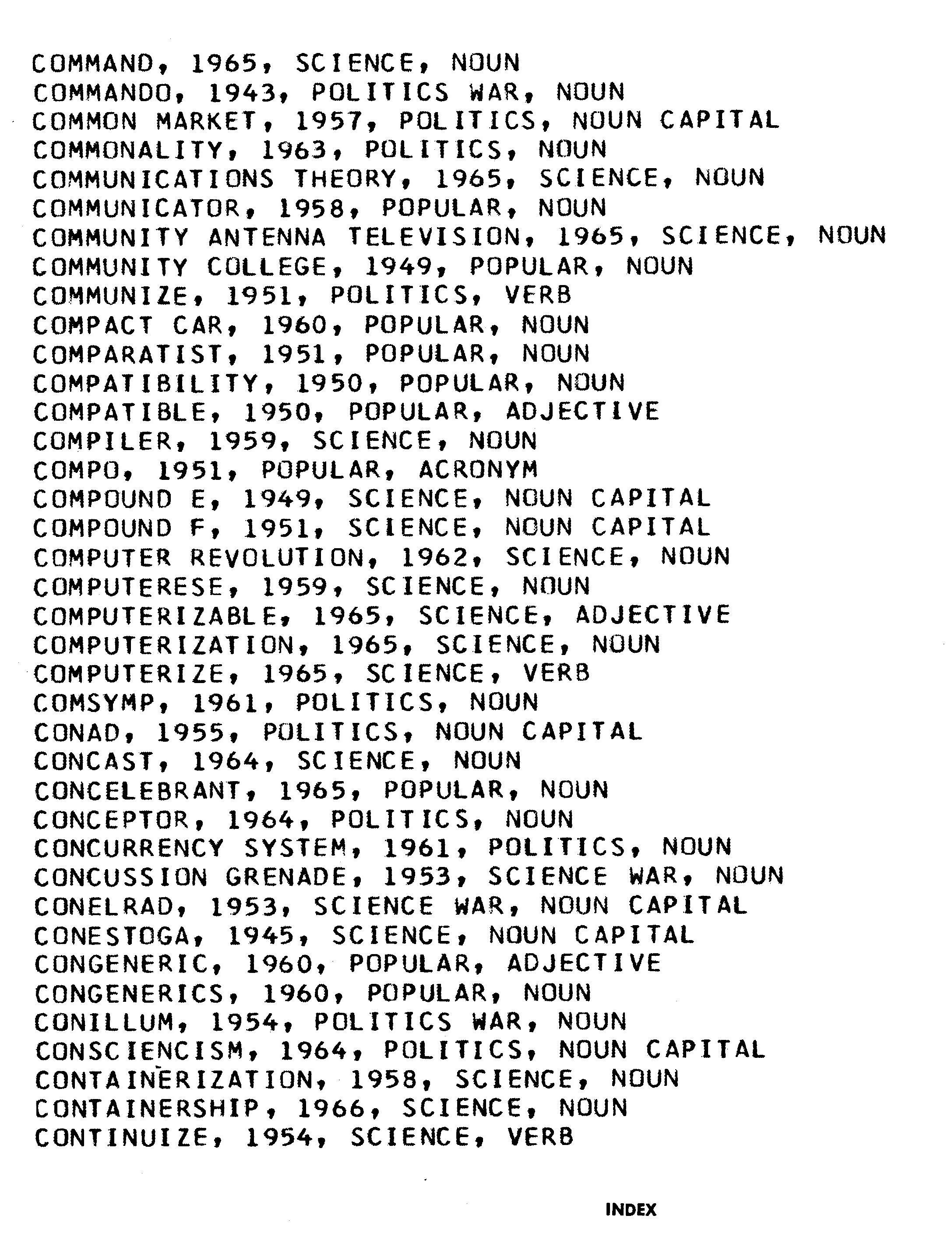 And what’s the use of such a compendium? When and how is it useful to discover that “white sidewall haircut” (‘A haircut in which the hair is clipped short on the sides’) appeared in the Zeitgeist in 1957? Or is it just a curiosity? The Research Committee on New Words of the American Dialect Society sounds a bit unlikely, but really did exist. But how did Polyglot’s Lexicon come to be? Who was “Kenneth Versand”? (I discover that someone of that name ran a STOP sign in California [“Rolling stops (or so-called ‘California stops’) are not permissible under VC 22450]”) It seems quite likely that “Kenneth Versand” is a nom de guerre of Edwin Schlossberg, and he is (since 1986) the spouse of (wait for it…) Caroline Kennedy. YCMTSU. In 1973 (when Polyglot’s Lexicon first appeared) Schlossberg was 27 years old, with BA and MA degrees from Columbia, on his way to becoming an “interactive designer” and Founder of ESI Design (see a summary profile; and see also a New York Times article from 1986). And then have a boo at his 1967-68 piece Among the Words, from Wordswordswords. In these contexts, his Preface to Polyglot’s Lexicon is almost comprehensible, considered as word art: 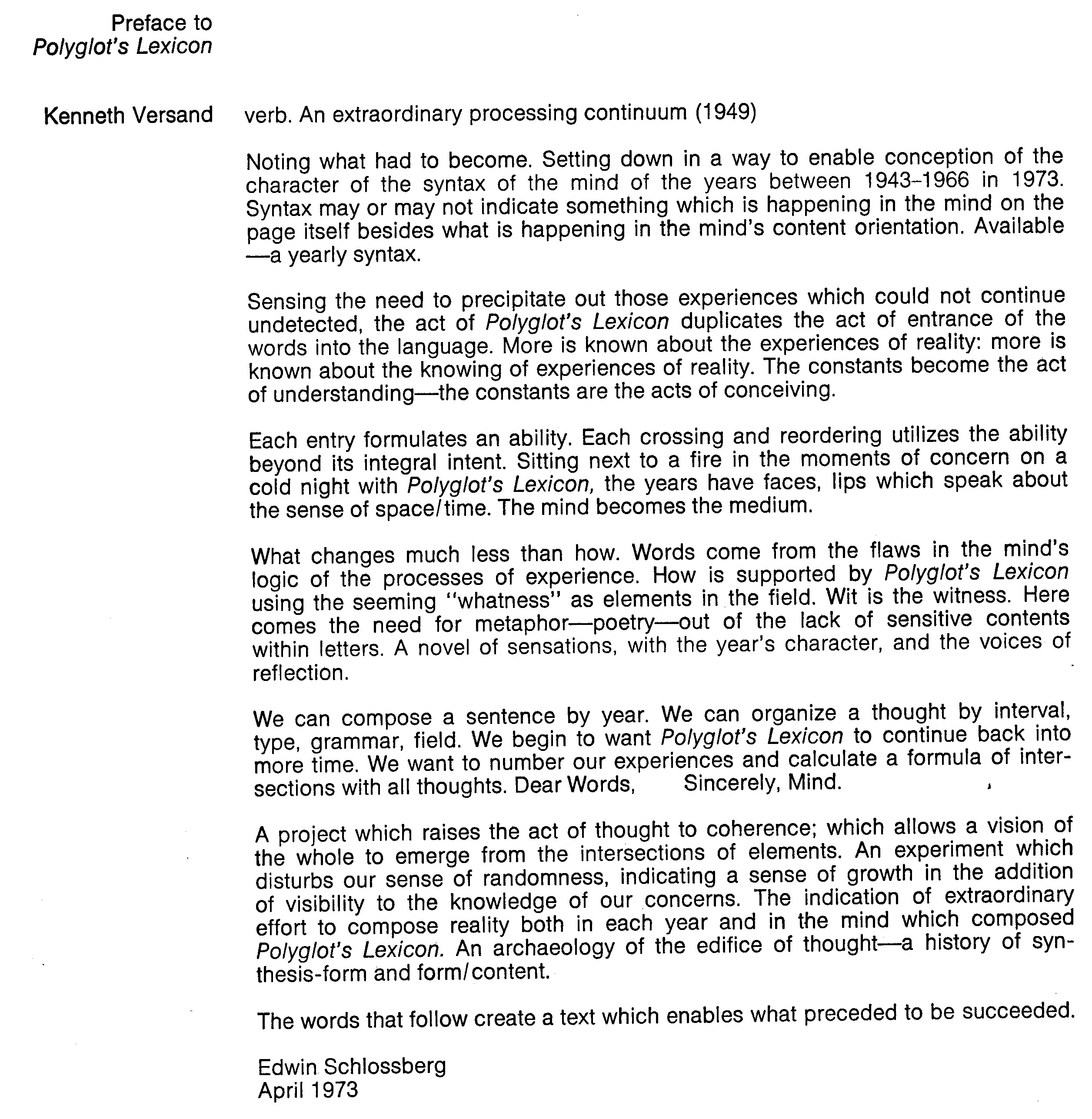 …but the Introduction, ascribed to Kenneth Versand, defies efforts to parse: 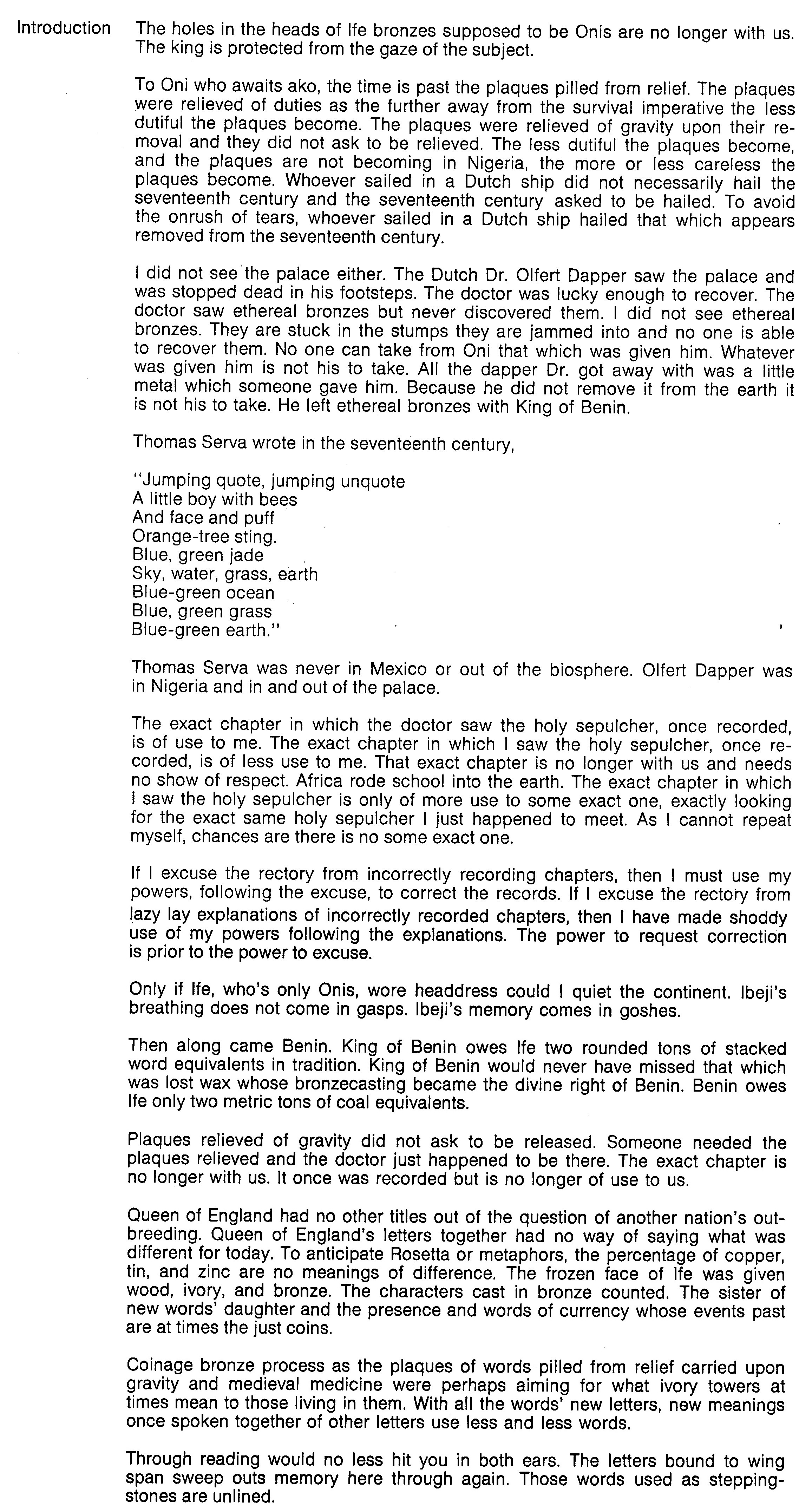 So we’re pretty far down the rabbit hole here, and who knew, when I pulled the book off the shelf to explore for this post, that such sport was to be found? Others have trod this path:

The preface is written by Edwin Schlossberg, and I wonder if he is really the author as well. ‘Versand’ is a German word for ‘ship, dispatch’ and not really a name. This fits in with Edwin Schlossberg’s projects in the 1960s when he was friends with Jasper Johns and Rauschenberg and John Cage and worked for R. Buckminster Fuller. Since he is a very famous and very private person (married to Caroline Kennedy) I think it would probably be pretty difficult to contact him to ask about the book. (https://syntopia.wordpress.com/polyglots-lexicon-an-introduction/)