As I work on a project (photographic or otherwise) I’m continuously wondering why—seeking for reasons, bits of insight, overarching whithers. What is it about gravestones that keeps me returning to cemeteries? It turns out that the answers are many, and not simple, forever unfolding into new revelations of the depths and varieties of Form. For me, so much of the pleasure is in reading (that is, imagining, chasing, constructing) the Story contained in any instance of the Form. 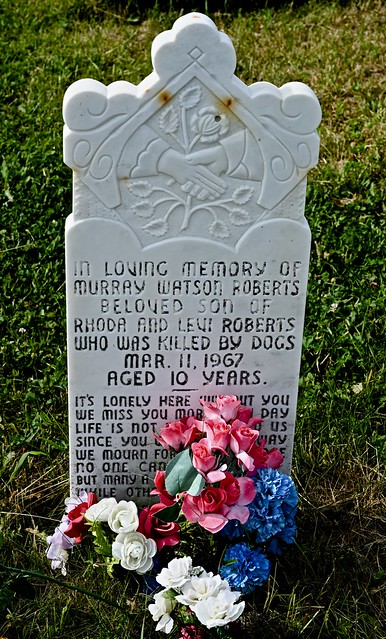 This stone is from Querpon, at the northern tip of the western shore of Newfoundland. ‘Killed by dogs’ is not a phrase found on many gravestones, but we surmise that Murray Roberts might have been teasing tied-up sled dogs (there were not many snowmobiles in Querpon in 1967) who got loose and took revenge. I had a chance to find out, but muffed it: also visiting the tiny graveyard the day I was there was a man of more or less my age who was “visiting the parents” and told me he’d left Querpon in 1962 to join the Canadian Forces and only returned to Querpon when he retired… but he’d have been a teenager at the time, and would surely have remembered the incident. And it’s not unlikely that Murray was a shirt-tail cousin, Querpon being about 20 households.

This double stone, from Isle aux Morts at the southwestern tip of Newfoundland, sketches a tale that it turns out we can fill in details on. We begin with two brothers, a disaster to a named boat, a precise date, even some detail on their marital status: 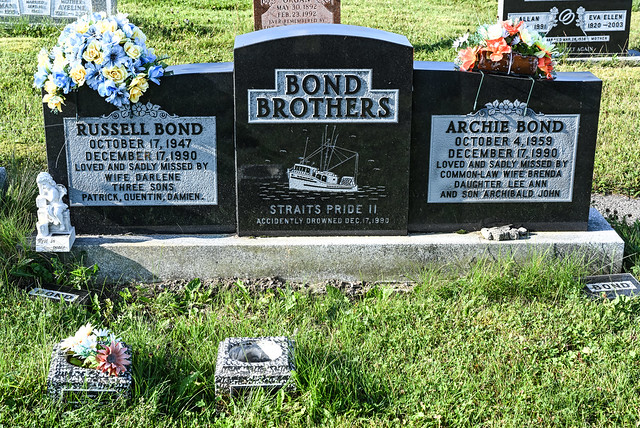 Straits Pride II went down in a storm 29 years ago, and the incident was thoroughly investigated by the Transportation Safety Board:

On 17 December 1990, the F.V. “STRAITS PRIDE II”, inbound to St. John’s, Newfoundland, from
the fishing grounds with a two-third load of round (ungutted) codfish stowed in the fish hold,
encountered adverse weather, capsized and sank throwing the six-person crew into the ice-cold waters. Three crew members who managed to board the inflatable liferaft were subsequently rescued, but the remaining three lost their lives.

The Transportation Safety Board of Canada determined that the vessel continued to fish after learning of a forecasted storm warning and that the combined effects of the weather, shipped seas, stowage of the catch, free surface effect of liquids, loss of the port paravane, and downflooding caused the vessel to capsize and sink by the stern. The suddenness of the capsizing precluded efforts by three of the crew to successfully abandon the vessel, displacing them into the sea. As they were wearing only normal winter clothing with approved lifejackets, their survival time was limited. The other three crew members boarded the liferaft from the sea and were rescued some eight hours later in a mildly hypothermic condition. (see the detailed report of the incident)

and there’s more, in the form of a song:

I also learned (via Google) that Russell Bond’s wife Darlene died in February 2019, and that Russell had found a life-ring from the Ocean Ranger in 1982:

Officials at the Search and Rescue Center said Friday that a life-ring found on Newfoundland’s south coast was not from the Ocean Ranger oil rig that sank in February but from a Greek vessel bearing the same name. The ring was discovered on the beach at Burnt Islands, near Newfoundland’s southwest corner, last week by Russell Bond, a local fisherman. Bond turned the life-ring over to the RCMP and told local reporters he was certain it had come from the giant oil rig that sank Feb.15 on the Grand Banks, killing all 84 crew aboard.

Small things, bits of drama from lives lived quietly, of no great significance, but fascinating for their essential humanity.