Here’s one of those bits of visual serendipity that keeps me barreling down the figurative mountain of photographic wonderment. Ever on the lookout for interesting patterns in rocks, and especially for little faces peering up at me, I collected this one a few days ago: 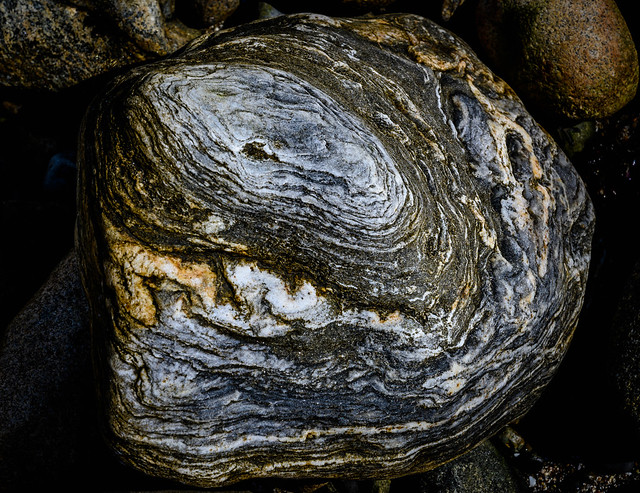 I wish I understood better the geological processes of formation and erosion that produced the laminar structure of this cobble, with its pupil’d eve and the vein of quartz seeming to define a mouthful of teeth. I’m almost content to accept them/it as Nature’s gift to my Quixotic search for rock persons, though I know it’s basically my overheated imagination at work.

Still, it wasn’t until I mirrored the image that the message of this particular lithic citizen emerged: 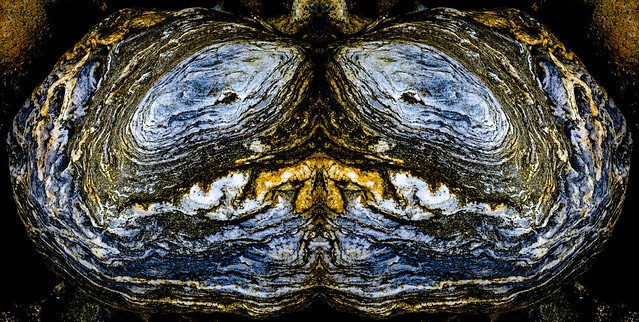 I’m learning to trust my own first thoughts when a mirrored image appears on the computer screen. For this one: Late November Pumpkin expresses something of the existential dread that accompanies the slide into Winter, when the leaves are down and the nights are colder. This pumpkin senses what’s coming, the inevitable Sartrean desuetude and decay and consignment to the compost heap… There’s something Charlie Brown-like about that crinkle of the mouth, the inevitable snatch-away of the football just about to be kicked.

Thanks to the unexpected appearance of the November Pumpkin, another Project is in the offing, starting to gather downhill speed as I rifle through the archive of tessellations with a weather eye out for appearances of super-naturals. I have a working title

and soon there will be a Weblet to display the work in progress. Stay tuned.