I’ve been reading in Aperture Magazine Anthology: The Minor White Years, 1952-1976, a book I’ve had on the shelves for 5 years but always been a bit daunted by. Turns out to be interesting, useful, relevant… even though many of the articles within are 60 years old, and address a photography that was totally not-digital, almost entirely black-and-white, and entirely within the ‘fine art’ realm. Many of the pieces are by Minor White himself, and articulate his personal vision of mid-20th century camera work. That vision was controversial at the time, and White has always been a polarizing figure: a renowned teacher (CSFA, RIT, MIT, private students), a sometimes-impenetrable seer, a wanderer in spiritual realms, a gay person in an era that was beyond uncomfortable with such diversities, a lightning rod for people who thought differently about photography’s quiddities. And a marvelous photographer. Paul Caponigro was one of Minor White’s students. Also among photographers I revere, Carl Chiarenza and Jerry Uelsmann (see Howard Greenberg Gallery show, 2008).

Sometime in the late 1960s I got my hands on a heap of back issues of Aperture (1953-1964, with many gaps), but my engagement at the time was with the photographs, and not so much with the text. I had too much of the dancing-about-architecture attitude toward writing about aesthetics, but I was mightily affected by the photographs, and however subliminally I absorbed a lot into my own sense of what [I imagined, believed, thought] photography ought to be doing.

But now I seem to be old enough to approach the writing again, and I’m truly sorry (though not surprised) that it’s taken so long. At the moment, Minor White’s articulation of the discipline of reading photographs is what most attracts my attention.

…there are two good reasons why the reading of photographs is undertaken. First, as an object lesson to thousands that more goes on in photographs than most of us guess… Second, to explore, sound out, measure however inefficiently, not good or bad, but what a picture says. (Aperture 5:2 [1957] pg 48)

…to “read” a photograph is to communicate, to the best of one’s ability, to another person verbally or with written words what one has experienced visually in a photograph or group of them. (Aperture 5:2 [1957] pg 50)

Postpone judgement! When starting to read, experience or take part in a photograph (or picture of any kind) first put aside both like and dislike. Leave criticism to last, or better still forget to criticize. (Aperture 5:4 [1957] pg 156)

Documentary, Pictorial, Informational, or some other kind? White labels the fourth category ‘Equivalents’, following Stieglitz’ use of the term:

I have a vision of life and I try to find equivalent for it sometimes in the form of photographs… [he later said] …equivalent of my most profound life experience drawing on the symbolist notion of synthesis the possibility of suggesting one thing by meaning of another.
(from Order In Chaos, 2013 [includes some examples])

Much ink has been spilled over what Equivalent means/betokens/involves, and explicating the concept really needs its own separate post, but here’s White’s closer for the article, to chew upon meanwhile:

Actually one of the safer identifying marks of the Equivalent is a feeling that for unstatable reasons some picture is decidedly significant to you. Or again, after subjecting a photograph to one or all three of the methods heretofore given, you are tormented by the feeling that there is more. (Aperture 5:4 [1957] pg.171)

Here’s the starting point for this adventure:

The experiencing of a photograph is a personal thing and therefore its course is unprescribable. That feature of a photograph which acts as a magnet for you is the starting point. Hence start with the magnet and follow its lines of force as you feel them to the end of the journey of the photograph… (Aperture 5:4 [1957] pg.162)

I don’t find the typology of Documentary/Pictorial/Informational very satisfactory, because (1) many of my photographs don’t fit comfortably in any of those boxes, but (2) I’m somewhat loath to claim the exalted status of Equivalent for them. And, more generally, (3) where do photographs labeled with the conventional term ‘abstract’ fit? or for that matter, the ‘expressive/creative’ photographs that are by far the majority in the pages of Aperture? What seems most glaringly to be missing in this typology is the vital importance of the stories that accompany and explain many photographs, the narrative context by which they join an oeuvre/’body-of-work’. Thus, Aunt Kate might be judged to be Documentary (seen here stunningly printed on satin): 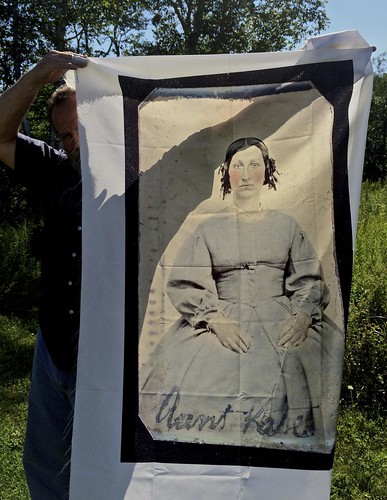 ‘Documentary’ sees her as a free-standing object, simply a photograph to be read for its inherent content, but her presence in my photographic world is polyvalent. She exists because she’s a rescue, a 2×3 wafer of japanned metal with emulsion, color, an inscription. Her context is that I found her in a bin of tintypes in a Nova Scotia junk store, so she participates in a vernacular history of Nova Scotia society and culture and demography—she’s not an isolate, though we can’t provide her with provenance (no way to know her name, except Kate, or her place of origin). Aunt Kate can certainly be read as a Photograph, in isolation, but her importance and significance is as a member of a matrix of other similarly rescued photographs. Bluenose Physiognomy situates her and hundreds of other rescues as best I can, by linking them into an emergent grand narrative.

I started to make a list of characteristics of my own photographs, as means of escape from the straitjacket of Documentary/Pictorial/Informational, but quickly found myself treading idiosyncratic water as I bethought this provisional array:

Lest this post get too complicated, I’ll stop here for the moment (promising to return to issues raised) and just point to a couple of useful resources in the Minor White vein: John Paul Caponigro’s 22 Quotes by Minor White, and Minor White: The Eye That Shapes (MOMA retrospective, 1989).