I was first drawn to this family saga by seeing Clara Peabody Bancroft’s over-the-top memorial at Pere Lachaise: 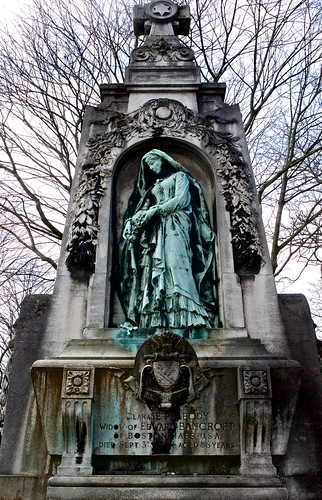 We can interpret the memorial variously: it’s an opulent sculpture of an elegant lady, modishly dressed and replete with possibly allegorical rose-strewing; or perhaps it’s the opening paragraph of a story, the sort that Somerset Maugham or Saki might have turned into something eternal. Or a puzzle of parvenus and arrivistes, of money and society. Or it can be read as a series of family calamities, or medical missteps. The elements of each of these scenarios seem to be gloriously present.

Clara Peabody was born in New Hampshire in 1826, and married Edward Bancroft in 1845. Edward was from Worcester, and became a Boston banker and broker (perhaps specializing in cotton), but the details of his occupation are pretty sketchy so far. Their sole surviving child Clara Elizabeth was born in 1857, and Edward died in Naples in 1865.

Here is Edward’s rather modest headstone in Mount Auburn Cemetery: 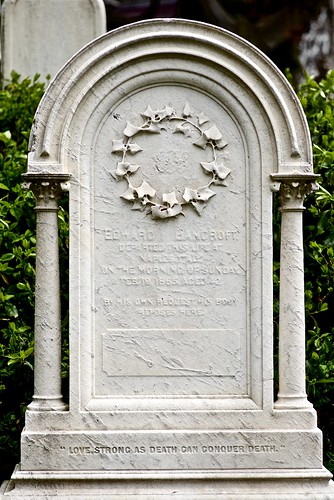 I have not been able to discover how Edward came to die in Naples, or what took Clara to Europe (her own passport was issued in 1866, and includes her daughter and a servant), or when Clara returned to her residence in Newton Center (where the 1870 census records her as having a Personal Estate of $200,000).

Clara Elizabeth married Count Benoit Tyszkiewicz in Newton MA in 1874 (she was 18, he 22). Just how he came to be in Boston is a mystery, but in 1875 he and his bride had returned to Europe, and he commissioned a schooner at Havre:


(Wikipedia, translated from the French)

It’s not clear when Clara Bancroft relocated to Europe, but her grandsons Benoit and Edouard were born in 1875 and 1880, and she herself died in Switzerland in 1883. She was first buried in Passy, but was moved to Père Lachaise the next year. A plaque on the magnificent tomb says

(Her son-in-law and grandchildren, to fulfill the last wishes of her daughter the countess Tyszkiewicz, have raised this monument in witness of an old memory)

The old memory may be of Clara strewing rose petals, and clearly it was the count who commissioned Henri Chapu’s sculpture.

But the story continues. Clara’s will specified that her daughter should be the beneficiary of a $100,000 trust, which would pass to her children if she should die. Clara Elizabeth did in fact die (of pneumonia) less than a year after her mother, just a few months after the birth of her third child.

The Bancroft plot at Mount Auburn Cemetery has a memorial 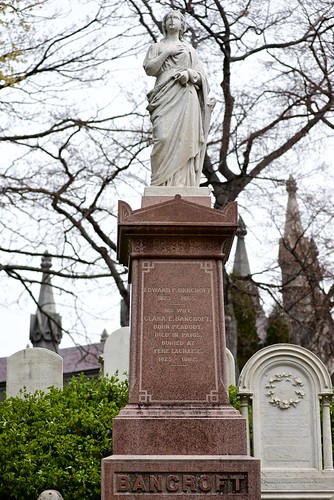 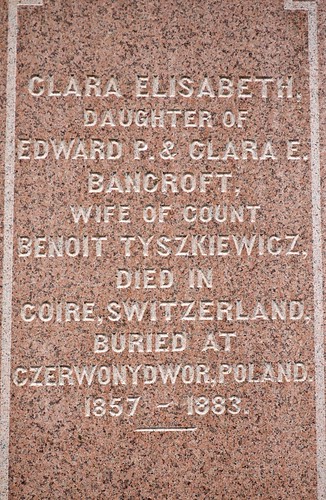 Just who had the monument erected is another mystery.

There was a court case in Boston in 1904, the Tyszkiewicz children seeking distribution of the principal of the trust, and their maternal kin desiring that the original terms of the trust continue. The children lost the judgement, and I can find no further information on their lives. (See the text of the judgement).

Count Benoit Tyszkiewicz lived until 1935. According to the Almanach de Gotha, he married the princess Marie Lubomirski in 1885. He seems to have been active in the development of sugar beet cultivation on his Polish estate, and his avocations included photography (membre de la Société française de photographie [1884] et du Photo-club de Paris [1898]).

Tyszkiewicz’s sports interest in the early years of his life made him travel to the Seine on a ship belonging to Grandfather Benedict, as well as a trip to the United States, where he was in contact with the family of the wealthy owners of the Peabody ships. Benedict developed not only sailing passions, but also (in 1874) married a representative of the family, young Elzbieta-Klara Bankroft.

In 1875, a naval architect, Żak Augustyn Normand, designed the costume of the Count “his yacht of dreams” (42.2 meters long and 7.2 meters wide), in honor of Benedict’s property in Lithuania and Żmudzi was named “Żemajtej” . The Count was planning to take a trip around the world on his award-winning world exhibition in Paris (1878). Due to the outbreak of the Russo-Turkish War, however, it reached only Gibraltar and Algeria . Until 1881, the Count was a member of the Nice Regiment Committee .

During his stay in Lithuania he remained a patron of Polish sports organizations, and also contributed to the establishment of Sokol gymnastics company.

Tyszkiewicz debuted in 1876 at an exhibition in Philadelphia, where he presented a reportage from a trip to Algeria . In Poland his works were presented in 1894. His works consist of photographs from foreign trips and works made in the atelier, mainly portraits. His work has enjoyed international recognition, which was reflected in the achievement of the 1899 gold medal at the Berlin exhibition. He was a member of the Paris Photo Club. The artist’s work and most of his work were destroyed during the First World War.

The surviving photographs are held by the Musée Nicéphore Niepce in Chalon-sur-Saône , France, and have been exhibited in Lithuania in 1999.

Benedict Tyszkiewicz, like other members of his family, including his grandfather Benedict, remained a collector and patron of the arts. The Tyszkiewicz Collection from the Red Court, owned by Tyszkiewicz, was one of the richest family archives in Lithuania. It counted 20,000 documents, 12,000 letters, over 10,000 books. The collection at Red Castle in Kaunas included a rich gallery of paintings by Polish and foreign painters Canaletto , Bacciarelli , Czechowicz , Wańkowicz , Rust , a collection of slippers (destroyed in the Warsaw Uprising), tapestries and makat . Benedict Henryk Tyszkiewicz was also known as the painting buyer Stefan Batory at Pskov’s Jan Matejko for 60 000 francs, which decorated one of the rooms in a residence in Red Dwor.

Benedict Tyszkiewicz was a very wealthy man, not only the numerous travels, but also the residence of Wiala (Wiała) in the Minsk district. Not only was it decorated with a magnificent garden, but also enormous game and hunting pavilions. The cost of their maintenance greatly affected the state of Benedict Tyszkiewicz’s finances, which eventually decided to liquidate them.

Benedykt Tyszkiewicz from a short-lived (9-year) marriage with Klara Bancroft (died 1883 in Chur , Switzerland ) had three children: the heir of the Red Court of Benedictine John , married to ???, Edward Branicki, married to Adel Dembowska, and Elżbieta Maria, wife of Stanisław Witold Plater Zyberk.

and more on the Red Court (translated froma Polish site):

Attractions of the Red Court near Kaunas

In the recently renovated Tyszkiewicz Palace in Red Dwor near Kaunas, every day, up to the Three Kings, trips, entertainment for children and adults, and tasting of Tyszkiewicz dishes are organized. Raudondvaris castle and chapel is a monument of Renaissance architecture from the beginning of the 17th century. The palace rises on the upper terrace of the Niewiazy River, 9 km from Kaunas in the direction of Jurboks. The main building of the palace complex in Czerwony Dwor is a castle from the second half of the 17th century with a tower. The manor house consists of a palace, a 3.8 ha park with two outbuildings, an orangery, stables and a glacier.

The construction of the castle in Czerwony Dwor in the second half of the 16th century began by Wojciech Dziewałtowski, the Kaunas subcommittee. Later the castle-palace complex was successively owned by the most famous Lithuanian magnates: Jan Eustachy Kossakowski, Janusz Radziwiłł, Jan Karol Worlowski, Antoni, Józef, Henryk, Kazimierz Zabiello, Michał, Benedict Emanuel and Benedict Henryk Tyszkiewicz. The architecture of the castle-palace complex in Czerwony Dwor is the most visible traces of the activities of the Tyszkiewicz, the last owners of the palace. After a fire in 1831, in which wooden court buildings burned down, Count Benedict Emanuel Tyszkiewicz built a new palace, brick. The castle became then a magnificent residence, where rich collections of paintings, works of art, rare books, exotic plants and animals were collected.

The palace and court buildings in Czerwon Dwór have been restored in the last few years. The Kaunas Tourist Information Center is currently operating in the former ice rink. In the palace they found headquarters: Juozasa Naujalis, Museum of Culture and Court Painting, Office of Civil Status. There are conference rooms, a hotel and – in basements – ballrooms. In the stables and coaching room the Art Incubator has opened with a theater and concert hall for 500 seats, there is a gallery of photography and art, studios and apartments for temporary artists staying.

During the Christmas holidays there are many interesting projects in Red Dwor. In the Art Incubator there are concerts. For children and adults, trips are organized on the grounds of the former Tyszkiewicz estate, during which the Old Keyman talks about the castle and its inhabitants, the tasting of the Tyszkiewicz cuisine is taking place in the cellars of the palace. Santa Claus is waiting for the children in Red Court. The cycle of Christmas attractions will last until 5 January inclusive.