Thoughts on How People Ought To Be, continued
(go back to the original blog post or to Pogo or forward to Mantras and Mentors or to Literature)

Influences of family of origin, pro and con, have a lot to do with one's models for how people ought to be, and are for many people sloughs of despond, the sort of territory investigated in lengthy bouts of therapy or psychoanalysis and never really outrun. Such is not my experience. My parents and my 3 siblings were surely complex people, not without their own dæmons, but each contributed something to my image of how people ought to be. 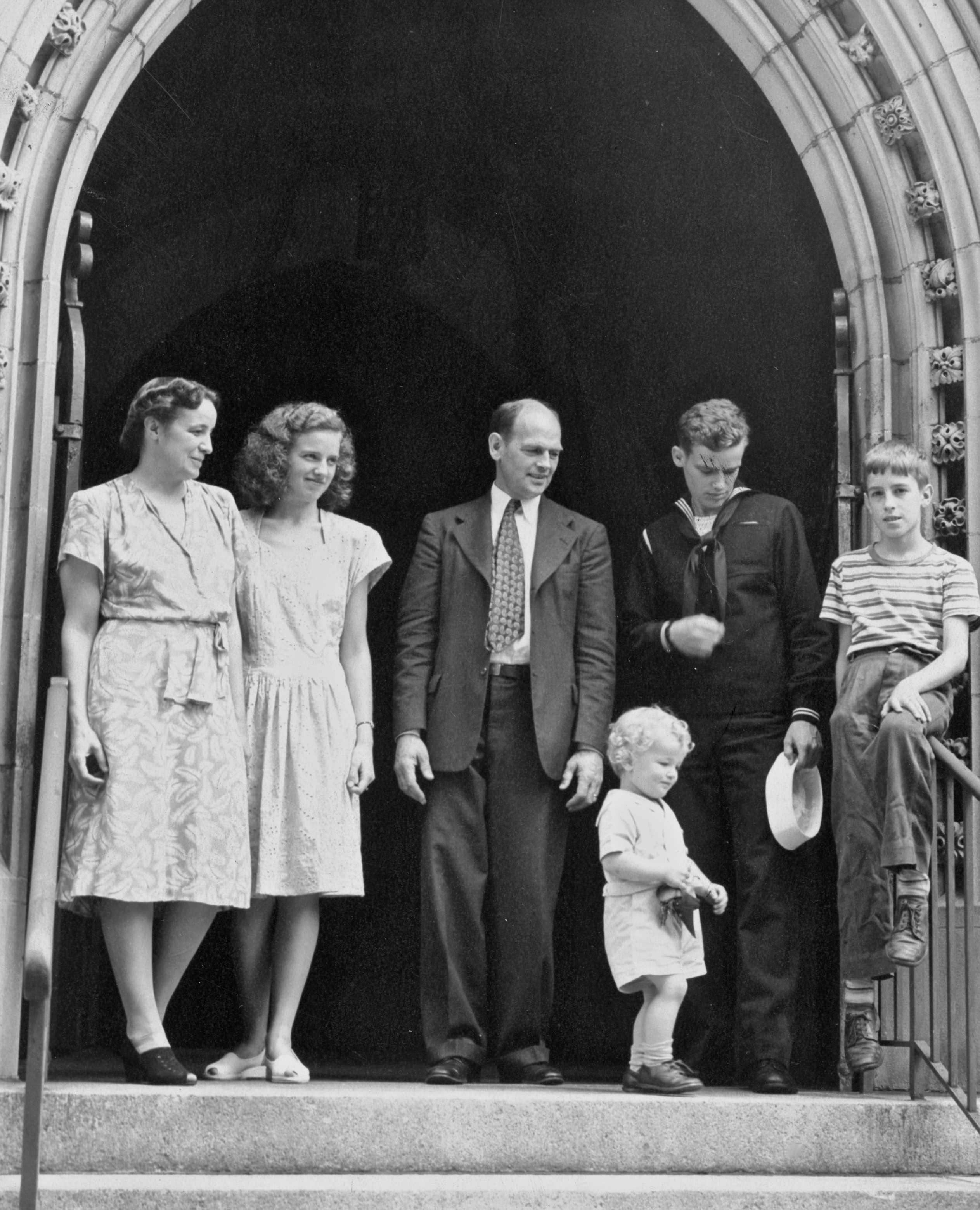 from whom I imbibed large territories of sense of humor and verbal wherewithal, and who mediated much of my learning about the world as an adolescent. We did a cross-country drive together when I was almost 14, and during the 15-16-17 California boarding school years he was the family member most present in my life (the 'rents being 2000 miles away in Ohio). Everybody would agree that John was one of the nicest people they ever encountered, and one of the wittiest—an example to emulate. The 9 years between us meant that there were no bones of contention, no jealousies.

My two older siblings, Alice (1925-2010) and David (1927-2002), figured in my life and development quite differently. The 18- and 16-year difference in age meant that they were essentially grown-and-gone by the time my detailed memories kick in, so I could enjoy the identity of the adored youngest ("Angelpuss" was David's name for me). I spent substantial summer time with Alice and Wick in Minnesota 1949-1954, and remember golden days of swimming, sailing, exploring the woods and fields, and reading, always reading. Alice was nearby during my college years, always ready to hear what I was doing and to offer sage observations. Much later I read of Alice's life in the seminal Lives in Progress (she's 'Joyce Kingsley' in that book, which was a text in hundreds of college courses in Psychology of Personality in the 1960s and 1970s), and she's the reason we retired to St. George, so I've had many hours of contact with her as an adult. When she died in 2010, I made a video for her memorial service

and contributed the text of the Strand Theatre marquee: 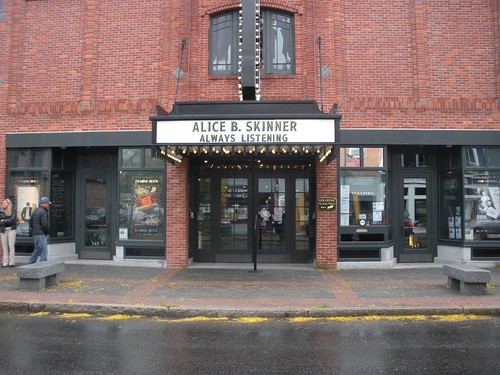 and that's exactly who and what she was: a sensitive listening mind, deeply and sincerely engaged with any person or project she encountered—again, an example to aspire to emulate.

Brother David was more remote, preferring as he did electronic circuitry to humans, but surely important to me as an example at several points in my life. 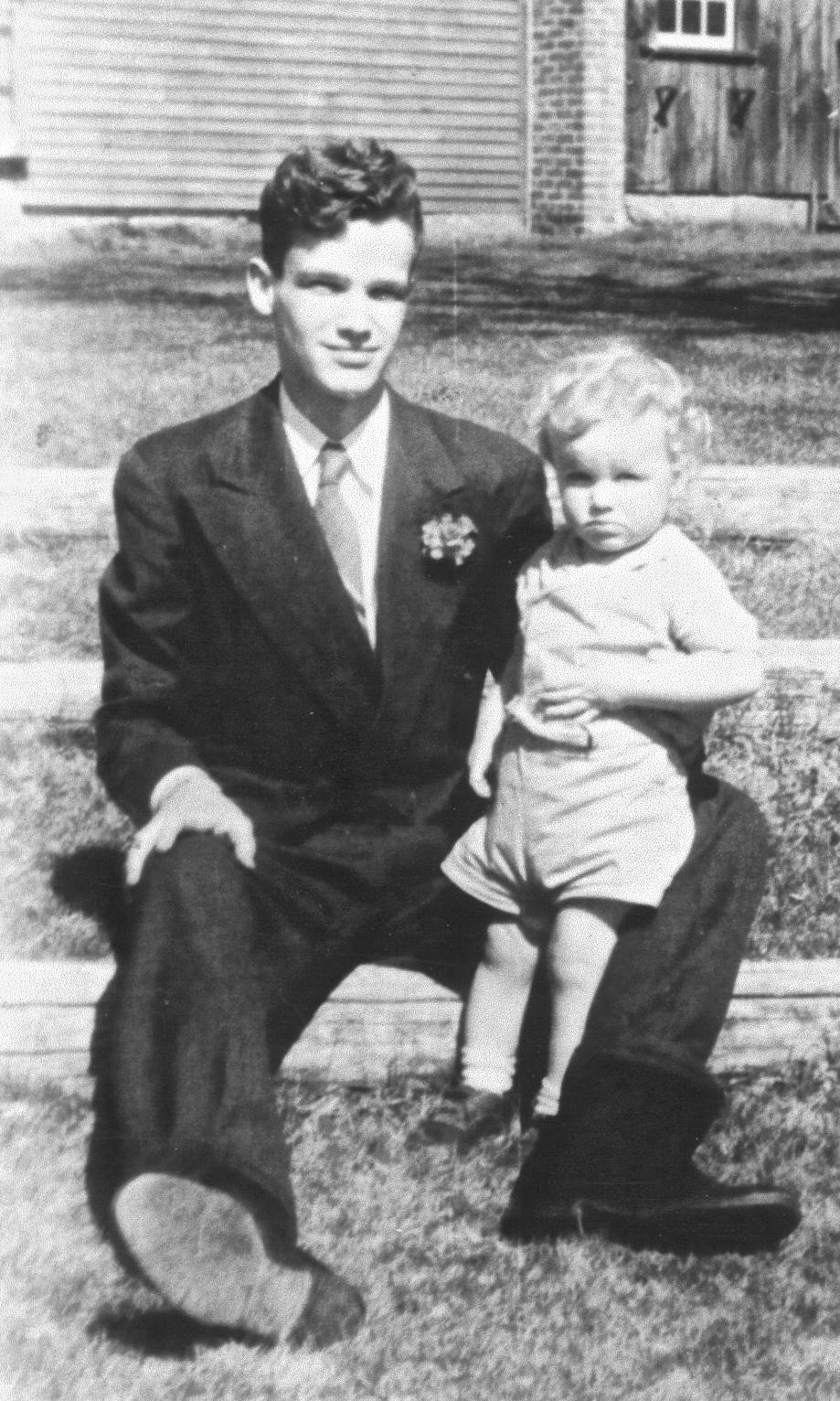 He and his second wife Marjanna were close friends and inspirations during my college years (1961-1965), especially in encouraging me as a photographer and in facilitating our courtship. David passed into negative example territory in the mid-1970's when he left Marjanna for Heidi (his third wife), and I never overcame my sense of critical disparagement of his actions, but I now think I was too often censorious of those actions and of his know-it-all persona, despite greatly admiring his accomplishments and creativity in electronics. His relationships with his 10 children were another unfortunate side (all of them are still wondering: who was that Masked Man?). When he died, his wife Heidi surprised me greatly with the comment that "he adored you." I should have been less judgemental towards him—which does suggest that I've continued to develop my sense of how people ought to be. 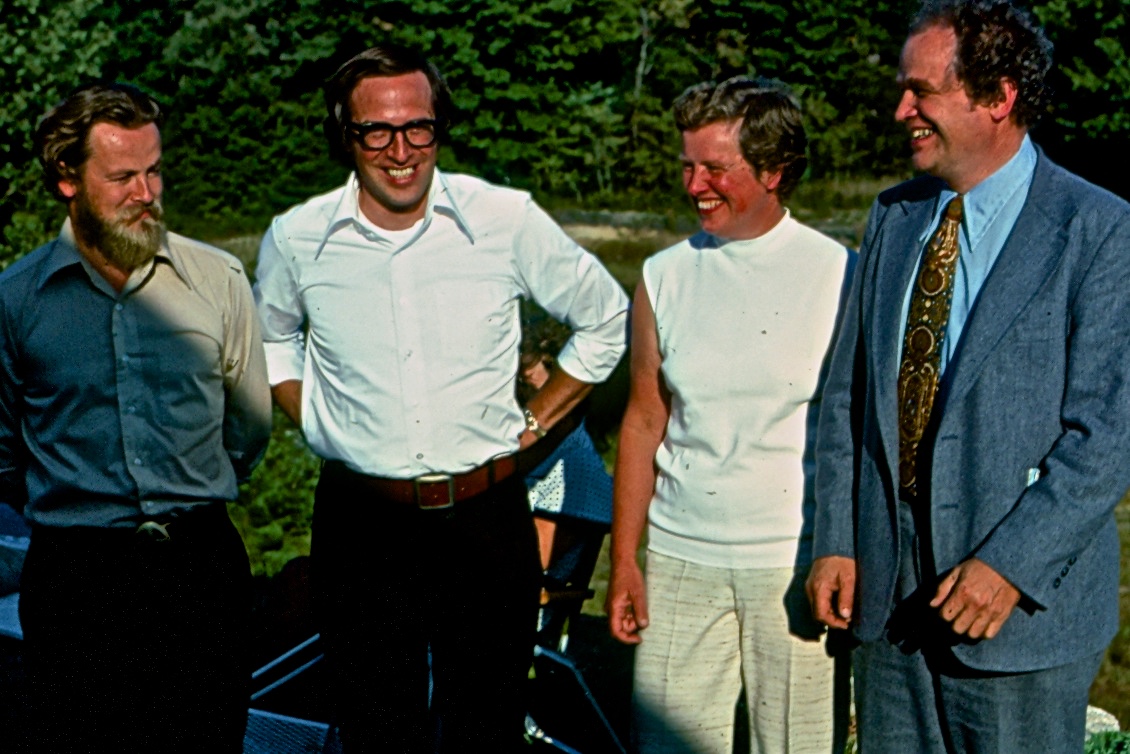 (at the time of Franklin's memorial service, 1977) 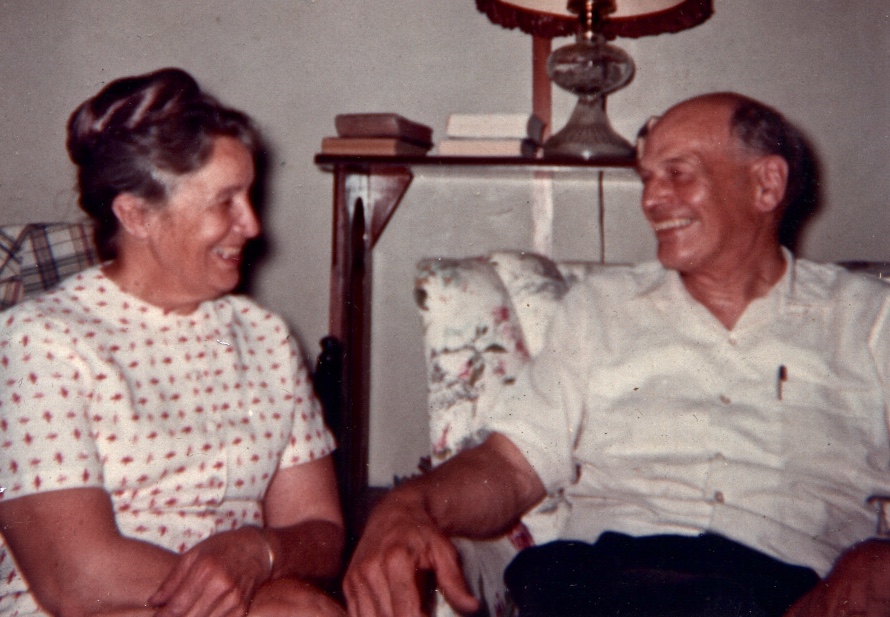 to my sense of how people ought to be is surely profound but just as surely difficult to parse from the matrix of love and regret and incomprehension (not to mention the distance of more than half of my own life). The characteristics I wrote down as I began to try to gauge importance were, respectively, 'industrious quietude' and 'calm studiousness'. While both ring true, there's so much beneath those glib summaries, so much that I know and imagine of their lives, and so much that I have nobody to ask for clarification and deeper understanding. Probably one's parents are always and irremediably mysterious, despite (or is it because of...) each contributing half of one's genetic/biological being. As for the psychic/spiritual being...

In my case, the facts that (a) they were 44 when I was born and (b) I never lived with them after I was 15 contribute to my lingering incomprehension of their lives. They were both always working, always seriously engaged in projects, never at loose ends. Whenever we did encounter one another our relations were careful and formal, at the sort of remove one might imagine for rarely-visited grandparents. As an adult I honored and respected them from a safe distance, but never had (or made) the occasion to let them into my life, to explore with them what I was thinking or what their understanding of life was all about. And now I know that they did think profoundly of those things, and might have spoken of them if I'd had the wit to ask, and the patience to listen.

My summary cartoon version of them has been that being Swedenborgians took up much of their energies and loomed largest in their identities and personalities. And I think I took nothing from that in the "how people should be" sense, but now I think the cartoon is a misrepresentation of a complexity that I still don't know how to plumb, from which I took much more than I've ever recognized.

So I'm inspired to wonder what were the sources of their notions of how people ought to be, and how they derived them from their lived experience. Both came from families that had plenty of negative-example material to draw upon, and together they constructed lives that clearly were of their own making, quite independent of their families of origin. They were widely loved and deeply respected by many of their contemporaries, but they had disappointments and enemies as well.

Voices were never raised, and conflict was never front-and-center, though I do recall a couple of my mother's silent but eloquent protests at my father's (predictable, chronic) lateness [mine was a childhood punctuated with fallen souffles...], and she could express disappointment nonverbally (brother David saw more of that than I did, but he was more often the focus of disappointment). 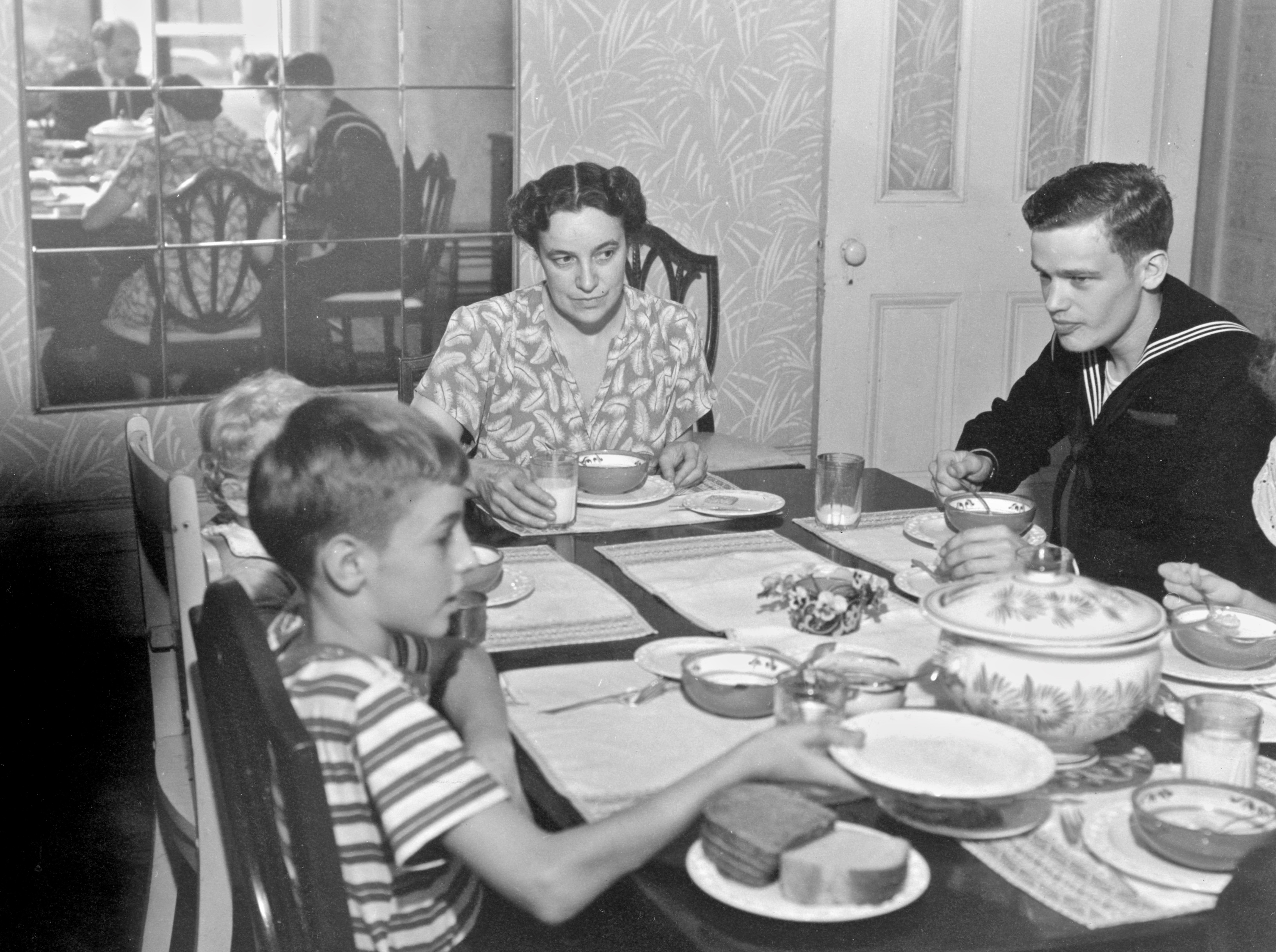 Alice and John were faultless exemplars of the art of not-arguing; David, on the other hand, was once seen to throw a dinner plate of food at a misbehaving child... My father never raised his voice in annoyance, let alone in anger. "Oh Gosh!" was the strongest language I ever heard him use, on the occasion of thoroughly bashing his thumb with the swing of a hammer, and his strongest admonishment was "we don't do that." My mother could summon a certain asperity when required, and she wrote a fine hand in expressing her opinions re: one's choices.
(go back to the original blog post or to Pogo or forward to Mantras and Mentors or to Literature)