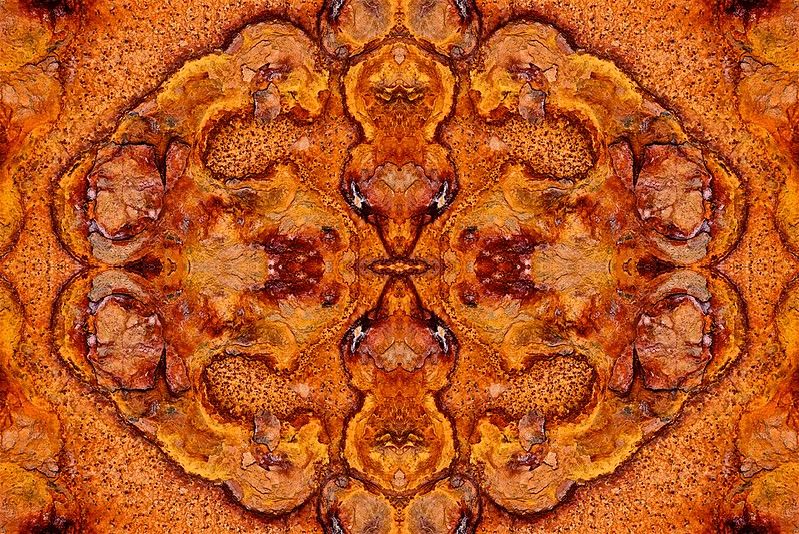 All the world is taken in through the eye, to reach the soul,
where it becomes more representative of a realm deeper than appearances:
a realm ideal and sublime, the deep stillness that is,
whose whole proclamation is
the silence and the lack of material instance
in which, patiently and radiantly, the universe exists.
--Mary Oliver

My photographic projects tend to sprawl and, once begun, to light out for the Territories and eschew simple summation under conventional labels. In the last ten years I've explored

I've never been clear about the intended audience for my photographic work, or even about why I've been so fascinated by the medium for the last 60-odd years. I don't so much wish to communicate as to explore, to continue to search out new personal epiphanies and interconnections in the visual realms. If others enjoy the results and share my enthusiasms for discoveries, so much the better. But my primary goals are self-indulgent.

This show is mostly concerned with visual palindromes. They often surprise us with hidden messages and lurking creatures which seem to be manifestations of the hidden and the latent, containers of the numinous and the mythic, reminders of other worlds just outside our normal senses and powers of observation. Such fearful symmetries provoke contemplation and draw us to fancy, to explorations of the imagination, and to the making of stories.

You may call these figures many things.
You might call them the Comedy Company of the Psyche,
but that would be flippant and not do justice to the cruel blows
you have had from some of them.
In my profession we call them archetypes,
which means that they represent and body forth
patterns to which human behavior seems to be disposed;
patterns which repeat themselves endlessly,
but never in precisely the same way
--Robertson Davies

Bilateral symmetry with horizontal mirroring is pretty much baked into our perceptual apparatus, because of our own right/left symmetry and our binocular visual equipment. But chirality (right- and left-handedness) is even more basic, at the molecular level and far beyond the resolving power of human visual apparatus. 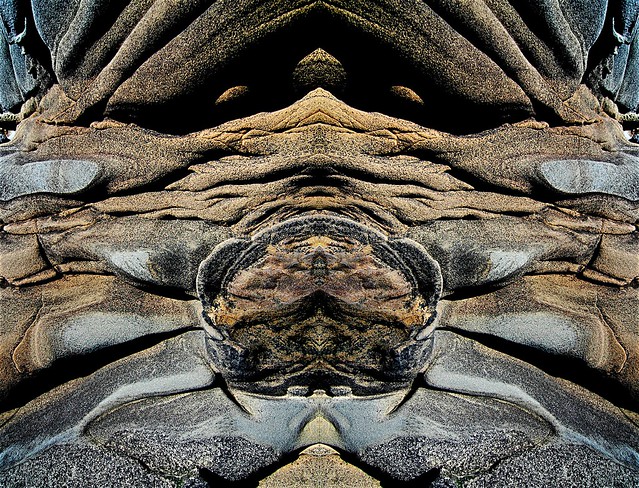 We respond to symmetry as if it is looking back at us. I see the tessellations as graphic palindromes, chiral workings-out of visual ideas in bifold rotational symmetries. To some eyes this reduplicative mirroring procedure is simply a gimmick, an obvious transformation that adds little or nothing to the content of the seed image. Others see the composite images as whole new realms for visual exploration, containing creatures and landscapes and meandering motifs that are implied but unrevealed in the seed images. The tessellations begin with the mundane, with bits of the real world we traverse and examine. They then unfold to mirror what our eyes have seen and the camera's sensor has captured. Sometimes we are surprised to find something almost magical staring back at us: a bit of the real transformed to something that never was.

Objects are concealed from our view,
not so much because they are out of the course of our visual ray
as because we do not bring our eyes and minds to bear on them...
We cannot see anything until we are possessed with the idea of it,
take it into our heads
—and then we can hardly see anything else.
--Henry David Thoreau 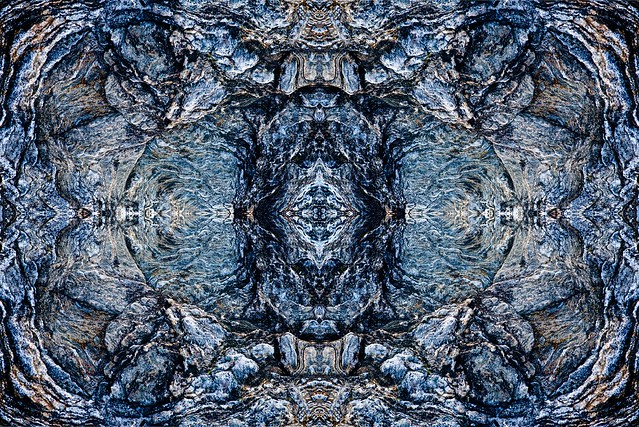 Most of the images in this show are imaginary, though they are rooted in the solid reality of rock and ice and rusting metal. We seek to place new images into the catalog of things-seen, but sometimes what we see is novel, new to us, outside of our existing categories or expectations, and the viewer's eye struggles to find some narrative essence. We IMAGINE faces, or structures, or processes, in images that seem to grow outward from a central point, or from a central line that forms an axis. We try to parse what we see, but our eyes do indeed deceive us with illusory patterns, and our minds happily construct alternate readings of sensory input. Subjectively, we see things that aren't objectively there, and objective reality turns out to be multifarious, fungible, subject to negotiation and reinterpretation. Nothing is simply what it seems at first to be, and always contains unseen and obscured deeper levels. We labor to to discern coherence and pattern, to read the story. Our stories are fabrications, full of just-so and might-be and as-if.

Humans have a well-established and possibly irresistable tendency
to fill empty places with phantasms.
--Caspar Henderson

The objects of perception are not necessarily rigid;
they move, bend, twist, turn, swell, shrink, light up, or change their color...
It is often necessary, first of all, to see the physical changes of the object
as deviations from a norm shape...
It may be equally necessary to see an object as
a coherent happening or process.
--Rudolf Arnheim

A spread of lichen on a gravestone becomes monks bowing to one another: 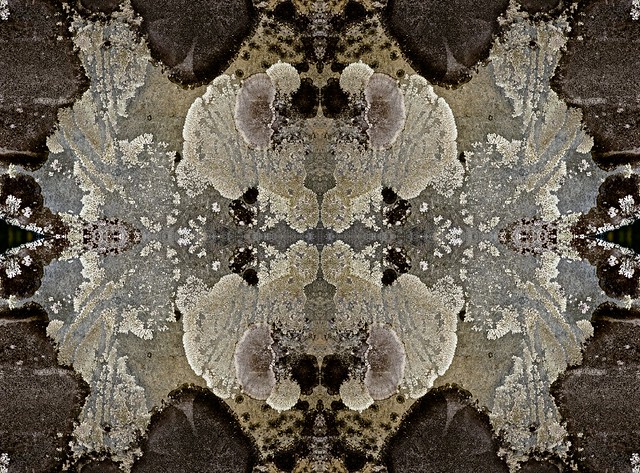 An icicle is suddenly a figure from a Japanese horror story: 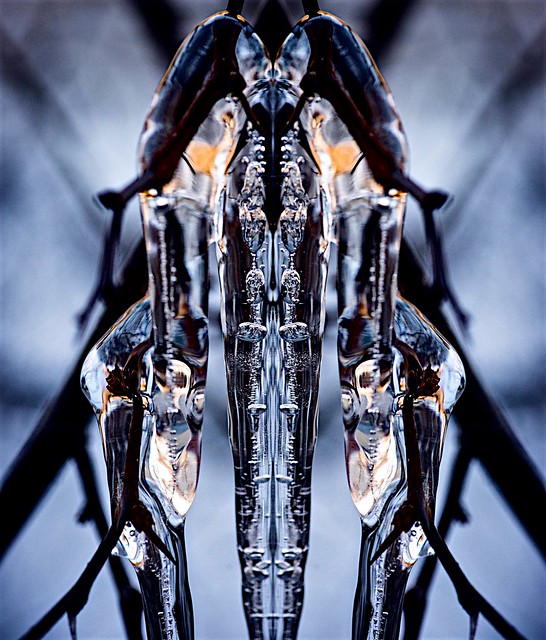 A bit of rock becomes a cosmic explosion: 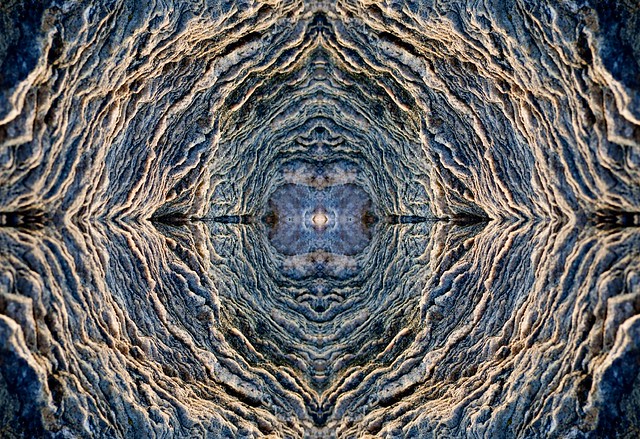 while another seems a regnant being referencing a William Blake illustration: 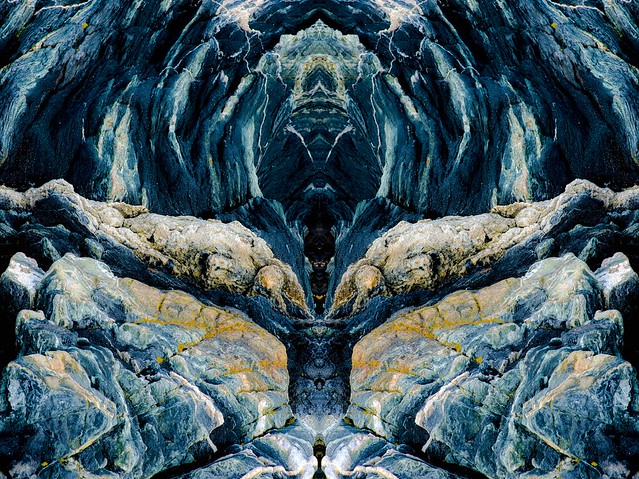 All of these readings take place in and emerge from the viewer's imagination, and successive viewers find different things. The monks can be seen as rabbits. The cosmos might be an oriental rug design.

The photographer projects himself into everything he sees,
identifying himself with everything
in order to know it and to feel it better.
All photographs are self-portraits.
--Minor White

The Apotheosis of Chard was my first tessellation, 8 years ago more or less, and it was almost an accident, a what-if experiment with an undistinguished image of frosted Swiss chard: 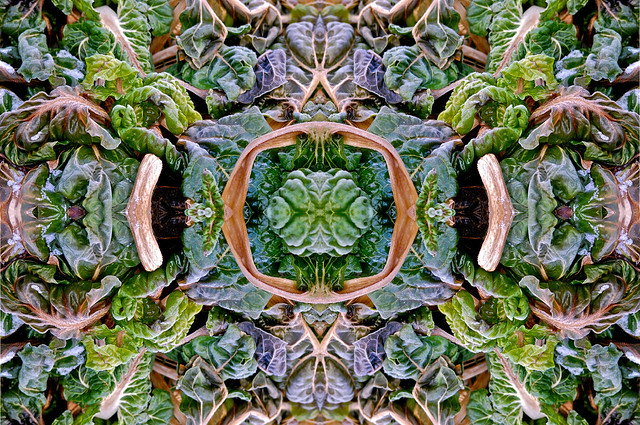 Since then I've done hundreds of experiments in construction of bilateral symmetries, most of them during the ad hoc of post-processing; only a few were visualized or imagined in the camera's viewfinder. The figures that appear in the strict geometry of axial unfolding seem to have been lurking, awaiting their freedom. They often elicit flights of onomastic fancy in viewers ("that looks like a ..."). The 4-panel tessellations often manifest as mandalas, seeming to radiate from a center, or as sylized thunderbolt dorjes of filigreed numinosity that invite contemplation: 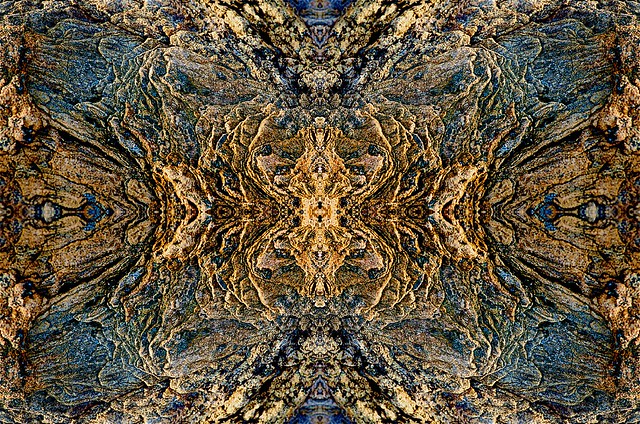 What is REAL in these realms? Is this photography or is it artifice? Are we looking at the real or the imaginary?

The infrared view of the Sheepscot River gives us a scene that our eyes simply can't see, the green of the trees turned to white, sky and water turned to grey and black, the geometry of the mirrored treeline disrupted by the gentle wake of an electric boat:

The frozen air brings the gift of seasmoke:

Of greatest importance is to hold a moment, to record something so completely
that those who see it will relive an equivalent of what has been expressed.
--Alfred Stieglitz

Aunt Kate reminds us of our corporeal near-symmetry. She is surely a real person, though the direct-positive capture technology of the tintype renders her as a mirror image of herself, and the photographer has added color to make her image seem more lifelike. Her REALITY is 150 years gone, and she would have been forgotten if I hadn't rescued the original 2" x 3" tintype from a Nova Scotia junk store. The image evokes a multitude of different parsings: technological, genealogical, cultural, aesthetic, mysterious. Her life-size appearance on satin hints at the latent power of the tissue medium to invoke the vitality of breath: she seems almost to be alive as moving air wafts the satin, and we're led to marvel at the paradoxes of photography—the captured moment brought forward in time, the connection of the now to the forever-vanished past, the distance that separates then from now. Aunt Kate is with us yet: 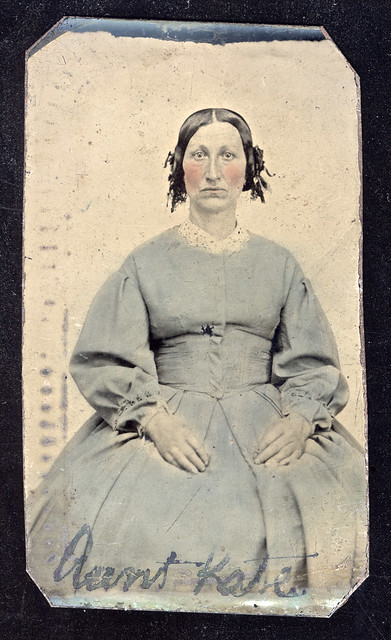 And Winter Comes And Goes At Ripley Creek is in the show because the mosaic'd view is from a vantage right next to Granite gallery: 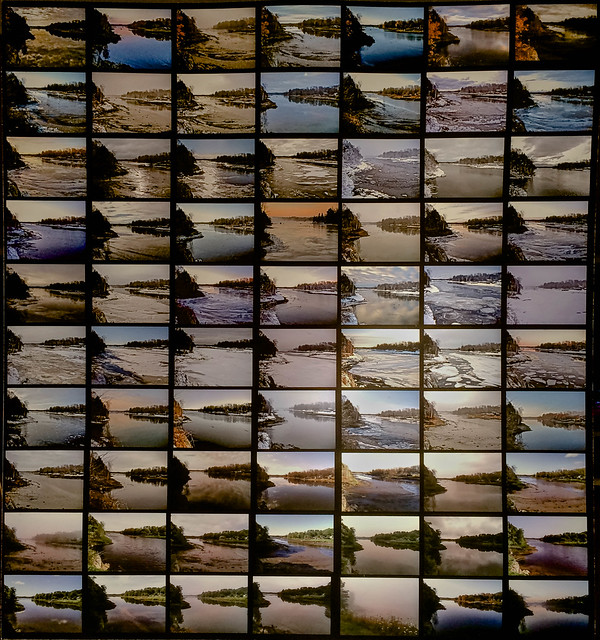 There is something very satisfying about the thought that
within ten feet of you at any given time
lies enough material to keep you busy a lifetime
learning to understand it.
--Ansel Adams
My concept of photography is nothing tangible.
I want my images to vibrate in vacuum, giving vent to
the intangible tangibles of the immediate tangent.
My prints reflect my deep non-concern with the concernable.
When I am out with my camera I am in with my libido.

I stand supine at the realization of my semi-experience.
May my prints cause a re-supinization of my spectators.
Let us PRAY!
--Ansel Adams