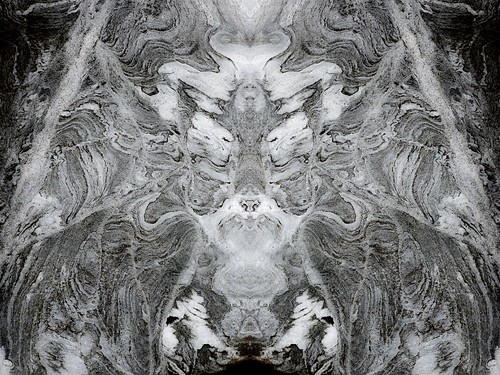 I've made a number of blog postings about tessellation (Simplifying, symmetry, the Elder Gods | A Sow's Ear | Inversion, conversion, reversion) and the chief element has been the discovery of hidden creatures, released by symmetrical transformation or unfolding along an edge. The conceit is that the liberated creatures were hiding, but the almost as remarkable fact is that we are so perceptually attuned to symmetry. There may well be survival value in that, and there's surely great social value when it comes to recognizing people and remembering faces.

I'm fascinated by the joy people take in hunting for creatures in my constructions, and pleased too by the great variety in what they discover. They don't all see the same things, and often don't see the features that I privileged as the key to creating a name for each image.

So is this mostly a frivolous pursuit, a game (though without winners and losers)? I see it as one of the (many) arms of my explorations of photography, a sort of antithesis of abstraction (concretion?), in which a narrative order emerges from material that might even verge on the chaotic, before the hinge creaks open to reveal one or more figures. The feedstock is often quasicoherent (or perhaps just 'interesting') patterns in rocks or wood, but the effect of symmetrical construction is, rather paradoxically, to simplify by disclosing a pattern or design that was latent.

My ability to foresee what an unfolding will produce is very limited, and I'm usually surprised and delighted by what appears on my screen when I join symmetrical halves. At the very least I produce a mirrored design, often expressive of a graphic coherence that's worthwhile to spend some time exploring. More than a few have then been named "design for..." on the basis of some discerned allusion or possible application.

Design for a Heretical Chasuble 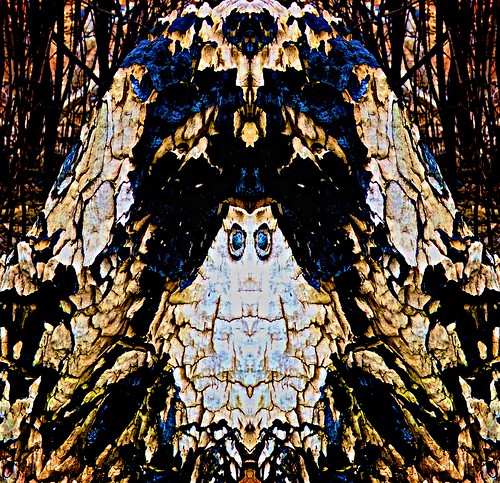 But it's the animals and anthropomorphic beings who evoke the greatest glee and provoke onomastic flights of fancy. As my friend Max Nigh was wont to say, "Name It and Nail It", but also "Just because we've named it doesn't mean we know anything about it." 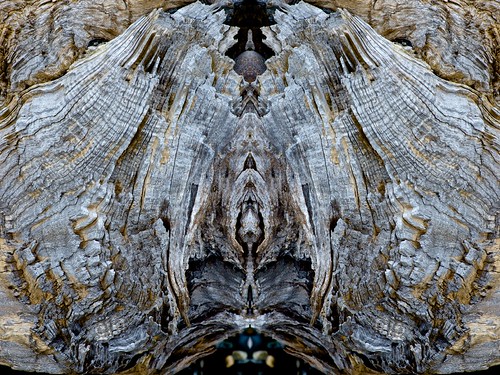 If one of the objectives of photography is to produce (create, liberate, disclose...) graphical objects of interest, things that capture our interest or engage our minds, symmetrical constructions surely meet the criteria. But are they Art, or merely Whimsy? That may come down to how they are encountered and experienced. In my Flickr photostream they may be "oh god there he goes again...", but fancy printing on grand scale and placement on gallery walls might change the perception. Or they might be turned into laser-cut jigsaw puzzles.

A special form of diptych? Possibly folding screens, or fabric, or dye-sublimated tiles.

Possibly the god of kale? 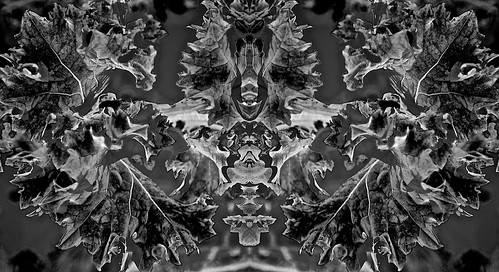 These issues are explored in greater detail in two Blurb books: Tessellations: Photographic Palindromes and YMMV: Studies in Occultation