Sometimes a family album includes bits of information about its denizens. These come from one such, and I first began to explore its complexities via a pair of photographs. The first, taken in Annapolis Royal, says "Uncle Naum" on the back: ...and the second, some years later, taken in Boston, says "Uncle Naum and wife": The story (as my fevered brain imagines it) is clear: downy-cheeked boy goes to The Boston States, where he meets and marries a floozy, identified only as "and wife" in the notation on the back of the picture. Knowing look appears in Naum's eye.

A bit of Google exploration reveals that Naum Warren Young (his name, from the back of the first photograph) was one of the sons of Simeon Young, whom the 1914 McAlpine's Directory lists as "gen dlr", of Blandford, Lunenburg County (see a map of the territory). Just how Naum got to Annapolis is an interesting question --not an obvious migration destination from Blandford.

(addendum: a real descendant FOUND this page and sent a graceful correction: "naum young son of simeon young both of blandford, ns was my grandfather. lived with us in springfield, ma till he died. i need to edit comments re his wife ellen (nellie) o'brien. my grandmother. irish but not a floozy. they settled in palmer, ma. near monson, ma. also near northampton ma. mentioned in your comments. naum had approx 7 brothers and two sisters, mary louise young - (aunt lou), and lottie."

My deepest apologies to Nellie O'Brien Young for the implication of floozidom --it just made a good story, as read from the limited evidence of the two photographs. Just goes to show that there's REALITY behind all of these treasures. And my thanks to Lillian Young Dearden for setting the record straight!)

The same album has this sibling pair, identified on the back as "Miss J. and Mr. S. Young, Blandford Lunenburg Co.", and accounting for its origin in a Northampton MA photographer's studio is another curiosity: 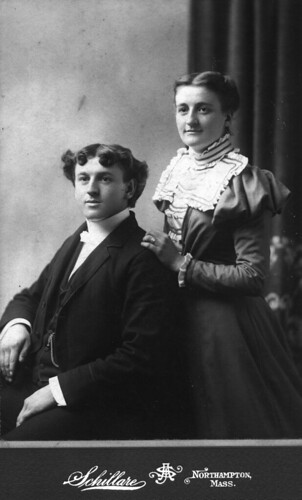 A notation on another photograph discloses that "S." is "Steadman".

Another sibling, with the same unruly hair genes: These were taken during an era when Nova Scotia's main export was brains, and The Boston States was a primary recipient of the migration stream.

Another from the album adds a hint: She is identified as "Aunt Pora" (Zipporah, surely), and she is obviously a nurse (the watch is a dead giveaway), one of the horde of Nova Scotia girls who went south for training, and stayed in The Boston States. The physiognomy is clearly Lunenburg Young --probably Naum's sister, by the look of her. The picture was taken in Monson MA, not far from Northampton.

There is a second picture of Aunt Pora in the album, probably taken several years later, and by a photographer in Taunton MA:

She looks prosperous and a bit matronly. This one was taken in Moose Jaw Saskatchewan, a few years after the Massachusetts ones above. What took them there? Clearly there's an interesting tale, if only it could be recovered.

Not all of the Youngs escaped southward. This one is identified as "Aunt Lottie", and also as "Miss Sallie Young": And this one is identified as "Mrs. Al. Gates, nee Mary Young": Another piece of the puzzle, this one says "Mother Mrs Steadman Young nee Ethel Hubley", and was taken in Taunton MA, evidently on the occasion of her graduation from, presumably, high school: There is also a card in the album that memorializes the death of Jennie C. Hubley, in 1892 at age 38.

So we infer that Steadman Young and Ethel Hubley, both born in Blandford, were married in Massachusetts... but the family album ended up back in Nova Scotia. That's not really a big surprise, since it's an important part of migration streams that they are often two-way. People can move back to the home place... and they can also send photographs even if they themselves never return.

Among resources that might be useful in sorting all this out: Lunenburg County Burial Index. Another tantalizing bit: Century House, "Built in 1868 by George Young of Ironbound Island for his son..."