Elizabeth's part of the show consists of 14 images printed on aluminum by dye sublimation. Each is 20 inches by 30 inches.

Thus shall you think of all this fleeting world:
A star at dawn, a bubble in a stream;
A flash of lightning in a summer cloud,
A flickering lamp, a phantom, and a dream.

-- Gautama Buddha in The Diamond Sutra

What do we photograph and why?

By my calculations, a photographer might choose
from over 230,000 perceptual moments per day in which to take a photograph
(selecting among 4 possible decisions per second in waking hours, each 250 msec. long,
which is a reasonable chunk of time for conscious acts or percepts).
In a week, there are over a million opportunitues, even for a slugabed.

Consequently, what we DO choose to photograph and then to process and then to present,
depends hugely on the individual's unique perspective:
that person's culture, training, skills, personality, passion, imagination.
A medium that seems to be highly objective can also be seen as extremely subjective,
as uniquely personal and expressive as improvisional music.

For me, a crucial aspect of photography is looking intently, concentrating,
making that choice of moment, expressing myself within the ephemeral world.
It is a solitary activity (except that Hugh may be engaged in parallel play nearby).

The human connection comes later, in viewing by others, with their own unique perspectives,
that is, NOW.

Thank you for your part in the process!

Catching the Light of Dawn

More of Elizabeth's work can be seen at brootphoto.com

Photography is usually considered a REALISTIC and documentary medium,
one which captures the world as it is, encapsulates memory,
and reflects the photographer's notions of truth and beauty.

My work in this show explores the IMAGINARY,
inviting the viewer to see, in bits of stone and wood and ice,
forms and personages which are figments, projections, wills o' the wisp,
conceits conjured into being by the mind.

"That looks like..." is a sort of mimetic perception and visual play
that has enlivened more than a million years of human evolution,
seems to be a universal and uniquely human capability,
and is in fact the very basis of art.

A bedjacket for Edith Sitwell

Somebody's been eating my porridge

More of Hugh's images can be seen via his Photographic Work page.

The Day after: Reflections on the Show

A four-day gallery show affords time and space for an artist to contemplate the what and why of public display. Four 7-hour days sitting in the gallery is an education in what visitors attend to and are drawn by, and also reveals something of what they miss that we ourselves have learned to see in our own work.

Months go into preparations for a show. Taking and processing the photographs is just the bare beginning, and decisions about presentation media (framed paper prints? metal? fabric? sizes?) are then followed by a process of designing the display space—what will hang next to what, how a visitor will experience the sequence, the finer points of hanging (height, spacing).

21 wall-hung images and a video of 70-some imaginary creatures is a lot to take in with a brief visit. To walk up to an image on the wall and examine its details by moving yourself before it brings it to life in a novel way. To enjoy the layout and juxtaposition in the designed space of gallery walls adds yet another dimension. The satins are 3 feet or more in their largest dimension and respond to air movement, and the metal prints have an intense presence that is different from what one sees on the computer screen.

And then there's the after, once the work is taken down and we begin to contemplate what comes next, and what the experience can teach us about the work itself and about our own development. Today I find it hard to imagine that I'll ever mount another show, but if I do, it will be very different in approach and content, in ways that I haven't yet begun to imagine.

Some photos of the show as it was hung

And a few more images: 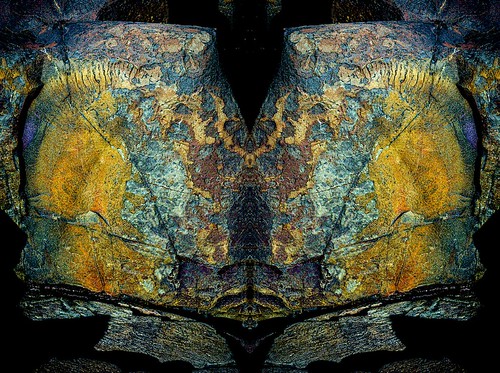 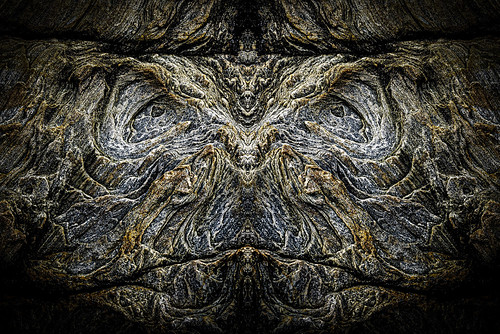 Looking Into An Uncertain Future (Hugh)