...the spectacle of existence, a spectacle that is at once
mysterious, joyous, tragic, trembling, majestic,
confusing, comic, sacred, devastating, exhilarating...
(Alan Lightman)

I can't ...remember... if we've had a Question addressing Memory, but the last few weeks of reading have nudged me in that direction. As is my habit and joy, the various books have been all over the map, but it seems that most have some bearing on the ins and outs of Memory. Unpacking this wealth surely requires more than a single omnibus Question, but I begin with a passage from Alan Lightman's Probable Impossibilities: Musings on Beginnings and Endings:

When I last visited the house, two years ago, my father was waiting to greet me. He sat in the den in his wheelchair, wearing a warm sweater even in April and soft bedroom slippers, an open book on his lap. I turn onto West Cherry Circle, drive past familiar houses. Flowers are blooming, it's spring. But something is wrong. The house isn't here. There's a hole in space where the house used to be. Slowly, I inch up the driveway and park the car. Something is terribly wrong. I feel as if I'm not in my body any longer. My body is a distant, cold moon. There was a two-story house here, with pink brick walls and a porch with white posts and dormer windows. I can see right through the empty air to bushes and trees on the other side. And on the ground where the house was, new grass. Not a single brick or splinter or piece of debris. Slowly, I get out of my car, a knot forming in my gut, somebody's gut, and I walk around the patch of grass where the house used to be. The space is too small. I stare at the driveway, follow it with my eyes as it winds down to the street, curves by the towering magnolia around which my brothers and I once chased one another with a gushing garden hose. I stare at the neighboring houses, the fence at the back of the lot, thinking that somehow I've made a mistake. I take a step back, blink. But there is only the silent, dead air. There was a house here. There was a cosmology of lives lived here, meals of fried chicken and mashed potatoes at the wood table in the kitchen, closets of clothes, drawers, homework by the light of the maroon double lamp, cops and robbers games with my brothers, my father shaving in the morning, evenings watching TV. I try to put the house back where it was, the kitchen, the bedrooms, the closets, my father practicing his guitar, my mother dressing in front of her long mirror. I try to will it into solidity. It was here. Some careless god has cut the ribbon of my life. The sixty-five years of the past, and the remaining years of my future. The piece that was the past has slipped away into black eternity, or perhaps into nothingness. Until this moment, I was sure that the past was still present, caught in the spaces between things, in photos, in books, in places my body had been. I try to spool back time in my mind. I walk to a spot near a disheveled azalea. Here, in this empty corner of air, I remember waking up with a bad dream and getting into my brother's bed beside him. Our beds were six feet apart, a desk against the wall, a closet, a white woolly rug on the floor. Here, where I am standing at this moment. And over there, I remember helping my father get the boat paddles out for a trip to the lake. Second floor. A closet with a dangling bulb for light. And there, the mahogany secretary with the leather-bound books, where my mother wrote letters in her back-slanted script. I can see her sitting there at the desk in her bathrobe, twitching her legs nervously under her chair.

Question One: I wonder if we've all experienced such a personal world-stopping episode?

I had pretty much exactly the same experience in 2016 when I last visited the haunts of my summertime youth in Duxbury MA, on a 20+ acre plot called Blairhaven.
When I knew it in the 40s and 50s it was a couple hundred yards of waterfront on Duxbury Bay, with the site of Myles Standish's house at the distant point: 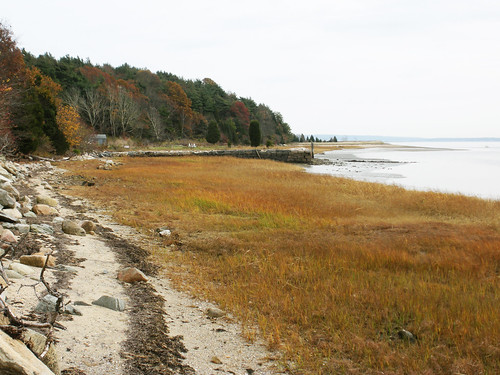 a gracious old summer house, a marvelous mixed forest (oaks, cedars, pines... and cat briars and sumac and poison ivy) in which I roamed at will,
and a vast hollowed-out cedar tree on the shore... 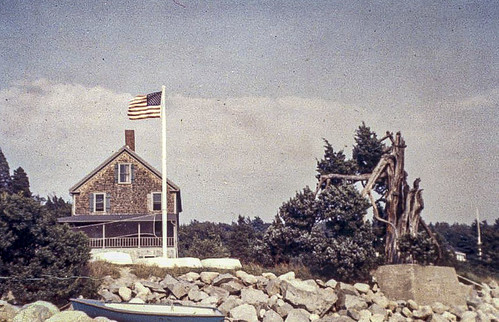 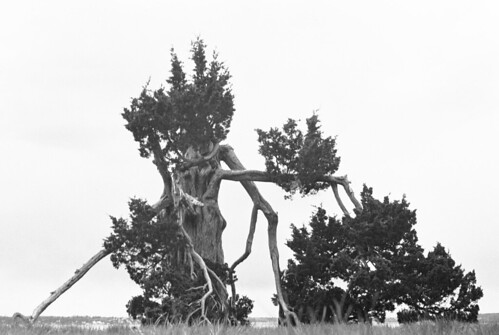 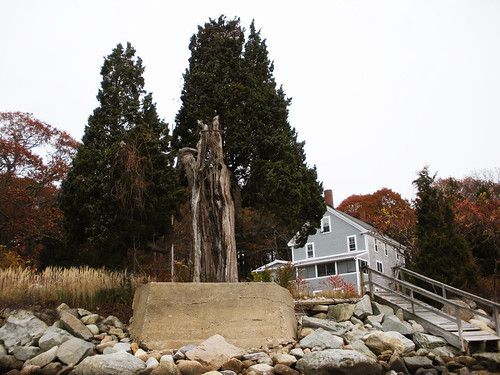 (...and great dramas in my life have played there:) 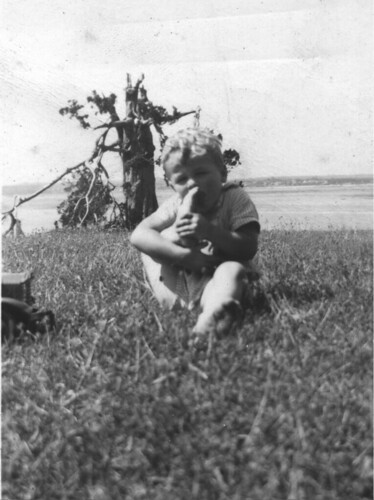 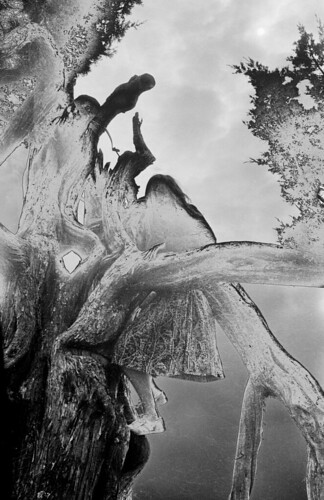 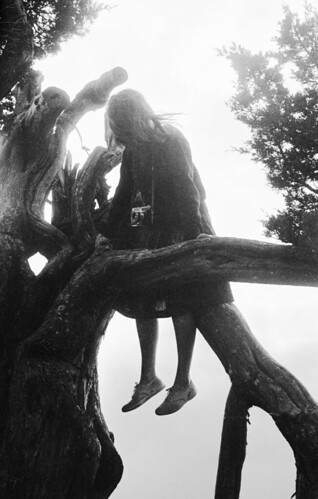 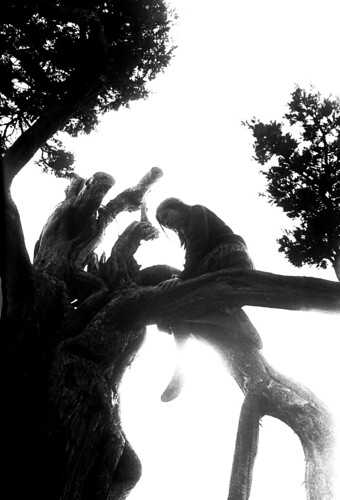 See a reminiscence of Blairhaven's summer camp days in the 1970s. See also the Blairhaven Committee minutes, 2011-2013, while the Town of Duxbury was developing plans for the newly-acquired property. And an historical summary of the ownership changes and the recent development of Howland's Landing Park.

On my visit in 2016 NOTHING remained except the much-reduced cedar tree: house and barn gone, all the trees removed, the whole property turned into the mowed greensward of a town park. No vestige of the landscape still so alive in snapshots and flashes in my memory. 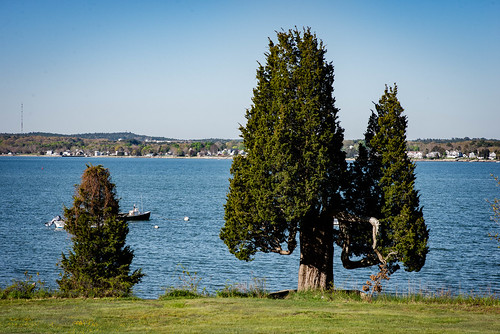 A moment of disorientation and vastation (a very Swedenborgian term for the feeling of an overwhelming encounter by which your perception/undertanding is in some way(s) changed forever) as something I had considered permanent and unchanging was seen to be transitory, ephemeral, perhaps even a figment. But no, Blairhaven is alive in my mind, in my own inner theater.

Question Two: So what is that inner theater of Memory? What sorts of dramas play out on its stage (or is it a multiplex, with many screens and stages)? So much of our time is spent in wandering the aisles of those memory archives, and Memory is such an important faculty. What a catastrophe, a life-changer, it would be to lose it, to be locked out of (or in?) that so-personal realm of Memory. Or is there some better, more positive, actually helpful way to think about that potential diminution or loss?

At that point, Monday the 21st, I sent the Question out, then went looking for what Amazon might offer in the way of books on Memory. Almost immediately I found this just-published book:

Veronica O'Keane's A Sense of Self: Memory, the Brain, and Who We Are See highlighted passages from Kindle.

...and spent the next couple of days reading it, vastly enlarging my notion of neuropsychology in modern-day biology.

If one lives to old old age, having not been felled by disease, some sort of final sensory and experiential slide from the world often happens. The person, progressively cut off from the world by the decline of sensory systems, seems to come to a point where there is a relinquishing of the sensate world. Thankfully this is being warded off more effectively and for longer as sensory aids improve. Fragility leads to reduced mobility, and there is a distancing from the momentum of the world.

And then (surprise, surprise) other serendipities happened.

On June 24th, Christopher Lydon's podcast offered The problem of Alzheimer's: a disease of humanity, a response to recent news of the FDA's approval of an Alzheimer's drug, aducanumab. The segment with Jason Karlawish inspired me to buy and read The Problem of Alzheimer's: How Science, Culture, and Politics Turned a Rare Disease into a Crisis and What We Can Do About It, a very useful and up-to-date source. See highlighted passages from Kindle.

As people survive their heart attack, as heart failure and some cancers become chronic diseases,
people are living into their eighties and beyond. This is the age of dementia.

So what have we got here? An affliction mostly of agéd folk, with well-known symptoms (beginning with Mild Cognitive Impairment [MCI], progressing to dementia), and [expensive] diagnostic procedures, widespread within the agéd population, having no clear cause (amyloid plaques are symptom, not cause; genetic proclivity is unclear), no effective drug treatment, let alone "cure". And Alzheimer's isn't really one disease, but [like 'cancer'] has multiple specific forms. And the American medical/financial system is extraordinarily poorly equipped to ease the crippling burden on sufferers and their families ("an effective intervention is not a treatment unless it has a business model... a medical fun house run by madmen... the United States only supports long-term care for chronically ill and disabled citizens who can prove they are impoverished and so qualify for Medicaid" [from Karlawish The Problem of Alzheimer's])

Also in the same territory is Arthur Kleinman's The Soul of Care, which I'd read in February 2020 and revisited. See highlighted passages from Kindle.

Other relevant items that have popped up include Bad medicine: aducanumab is a lackluster drug with a high price tag (Karl Herrup and Jonathan Goulazian, in STAT newsletter) and The Secrets of 'Cognitive Super-Agers' (Jane Brody in New York Times, 21 June).

So the Question continues to enlarge, but just how and whither isn't quite clear. Perhaps a consultation with Mnemosyne would be a good place to begin, but she seems to be helping other clients at the moment...

It has occurred to me that we might broaden the Question to take in the general problem of neurodegenerative diseases, said to affect 20-40% of the agéd, including ataxia (e.g., Parkinson's) as well as the various dementias. They're all essentially "incurable", such that a diagnosis is basically a slow-acting sentence.

And this just in: Researchers Made a Free Online Calculator for Dementia Risk. And Profound Brain Changes Found in Patients Who Died of COVID-19...

That perhaps leads to Question 3: A problem that arises with this material is its sensitive and possibly privacy-traducing nature, and I wonder if talking about that issue would be Convivium-relevant. Age-related loss of cognitive and motor capabilities is something we're all familiar with and/or not looking forward to experiencing ourselves; we've all known and know of people who are now somewhere in the Alzheimer's tunnel (as I think about it, more and more people...). One personal style is to maximize candour and talk about difficult topics as if they weren't fraught and loaded (a Nova Scotia friend of mine is doing that about his recent surgery for pancreatic cancer, on Facebook...); another style is much more reticent and privacy-preserving, and doesn't want its business in the street. Both are worthy of respect, and one doesn't want to find that one has either been unresponsive to candour or has infringed upon privacy.

And surely we learn as we go: not all that long ago I had a strong aversion to hospitals and dealing with others' impending mortality, and those attitudes surely got in the way of compassion I might and should have practised. I'm thinking of the trip Betsy and I made to Indianapolis in 2011, where she spent a week sitting with Martin, whose liver was failing. I only visited once, and very briefly, terrified by the whole ambience of terminal illness and intensive care. I was overwhelmed again in 2015 when my brother John was in extremis in Mexico: I went, but fled again as soon as I could, assuring myself that there was nothing that I could do, that I had none of the relevant skills, that there was nothing in my power to fix his predicament. It was different with Wick's last couple of years, when there clearly were things I could do to ease things for him, and I did them without quailing at the challenge, right to the end. So I think now that I'm less afraid of being in proximity to mortality, but it's definitely a work in progress.

Among other recent books that bear directly on Memory are

Other books I've been reading (to which I intend to add annotations, real soon now...) that are somewhere in Convivial Questions territory: