I started out to keep a running log of the week's photographic activities and musings, but didn't manage anything like consistency. We did spend a lot of time photographing and processing the results, despite (1) 5+ days of power outage (running on a generator) and no Internet except via iPhone Hotspot, and (2) a 5-day trip to Nova Scotia, during which we each did hundreds of photographs.

2 Nov
What I can report after reading Andy's essay and then going out photographing: I didn't see the tree that Betsy captured so magnificently. Walked right by it, even did a photograph of a detail on it, but seeing the light didn't happen. I mostly did what I usually do at that locale: look down, find bits that are enigmatic or whimsical or design-y, and capture them as best I can (but even that is more rushed and haphazard than I'd wish), and rely on Lightroom work to nudge some proportion of the catch into presentability. That strategy sort of works, in that I'm moderately pleased by some of the results, but it has the drawback of over-reliance on the psychic bid; it's scarcely mindful, and only employs a tithe of the Information that's in front of me.

All that said, I am finding myself looking at light more often, noticing interesting play of light more easily and more centrally in the visual perception part of my engagement with the world outside my own head.

When we went out shooting in the afternoon I mostly fell into old habits, seeing creatures in rocks. Some nice images, but little that seems to accord with Week 4.

And then we went to Nova Scotia for 5 nights and 4 days. We make the trip once or twice a year, and are immediately engulfed in a maelstrom of memories (we lived there for 20 years, 1972-1992).

5 Nov
Early morning thoughts on the composition exercise: of course big-round-in-center is one preferred design. If I try to imagine others (without cutouts on paper, just Gedankenexperiment) what I see first of all is something large and dominant on the left and lesser components arrayed on the bottom and toward the right, sort of laid out like a reading page. It would be interesting to explore what proportion of my photographs follow those two basic layouts.

And re: abstraction: the matter of camera attitude, considering the ultrawide on an angle, from down-low or up-high, anything to break up the strict rectilinear head-on.

Both of those are just thoughts, untested.

It was much more gratifying to walk around the house (which our daughter now presides over) and collect images that capture bits of uniqueness. This one (a porch window, crack repaired with tape quite a while ago) is surely an Abstract: 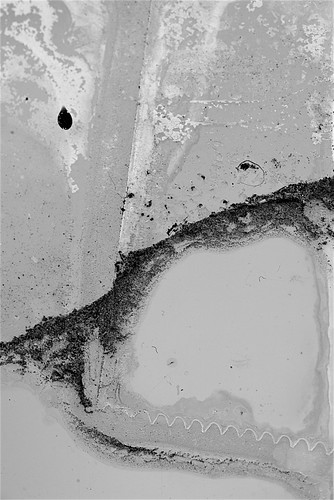 and this (the same repair, from inside) is pretty much Enigma: 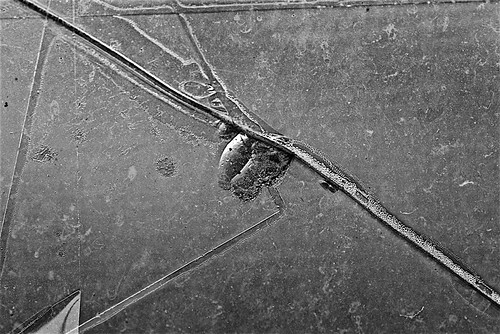 and this one is another in the burgeoning Eyes series (Kate says it calls to mind the Tesseract in A Wrinkle in Time): 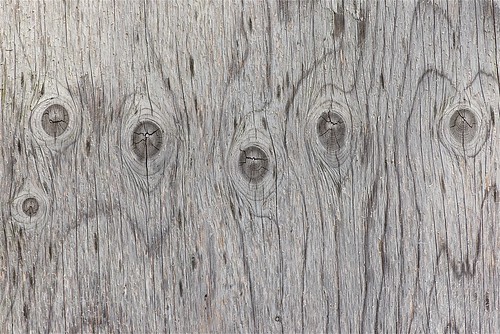 (others still to upload to Flickr, when there's more bandwidth)

I do feel that I'm seeing more, looking more carefully, attending to more elements of the surrounding possibilities.

6 Nov
Here in Nova Scotia we're surrounded by 45 years of memory, a lot of it attached to things and places. In many cases the remembered is what's no longer there—people who are gone, trees and buildings no longer on the landscape, elements of a vanishing way of life that seems 'traditional' but is only a generation or two in the past. This is what it is to be entangled, when everything you look at fires off a chain of memories and associations.

This one is of course an enso, made by Kate when she was about 7 and spending a few hours each week with Suzy the potter: 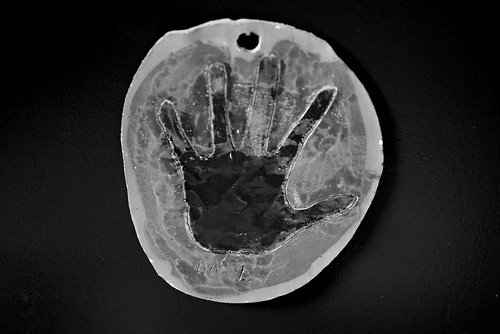 and even as mundane a detail as the end of a porch railing is imbued with domestic magic: 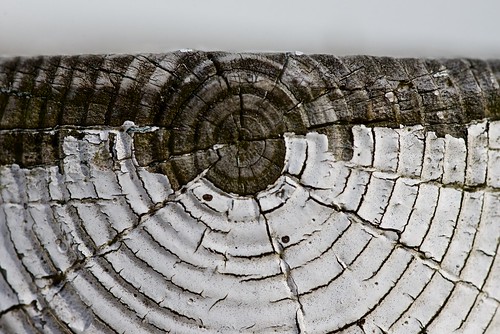 6 and 7 and 8 Nov (daily journaling fell by the wayside)
We went on extended adventures at several locales (Blue Rocks in Lunenburg county, the railroad bridge over the Gaspereau River, the dykelands near our house, Blue Beach on the Avon River) and made lots of exposures, some of which seem directly linked to Exercise 4 and Exercise 5, though for me it was less deliberate than I'd meant to be: so much ignited the senses, partly a matter of the novelty of the locales but also just the joy of being out looking at things, knowing that we had limited time and meaning to make the most of it. And then hours of processing the hundreds of images, trying to identify the truly exceptional images among the many contenders

I am seemingly unavoidably and inextricably drawn to stories that inhere in images. Even the very simplest, a fault in the glass of a 19th century window pane, links up with memories of things seen through that window. Without those traces, it's minimalist/ho hum; with them, an index of a lifetime. 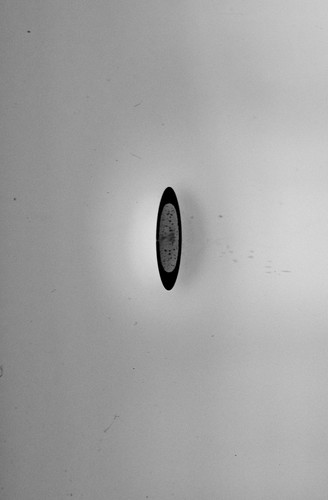 and the stairs, worn and chipped and scuffed, each tread known to my sock feet: 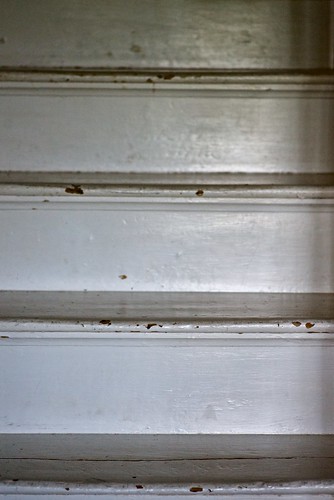 and the stained glass in the front door transom, brought back from afar by a sea captain in about 1860: 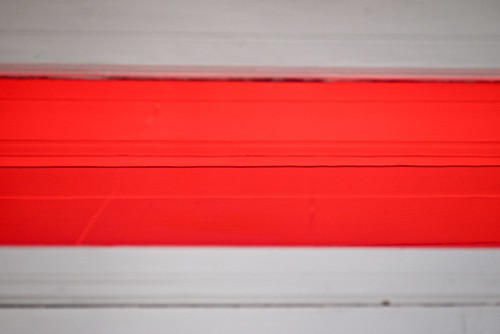 Each of those things is redolent of our lives in the space of that house, in that utterly unique locale:

I'll continue this report of the Nova Scotia trip in a later post.