I regard the picture as a new
object to be contemplated
for its own meaning and its own beauty.
(Aaron Siskind, 1946 Artist Statement
MOMA New Photographs exhibit)

A photograph by Carl Chiarenza has been pretty much constantly in my mind since I encountered it in Chiarenza: Landscapes of the Mind: 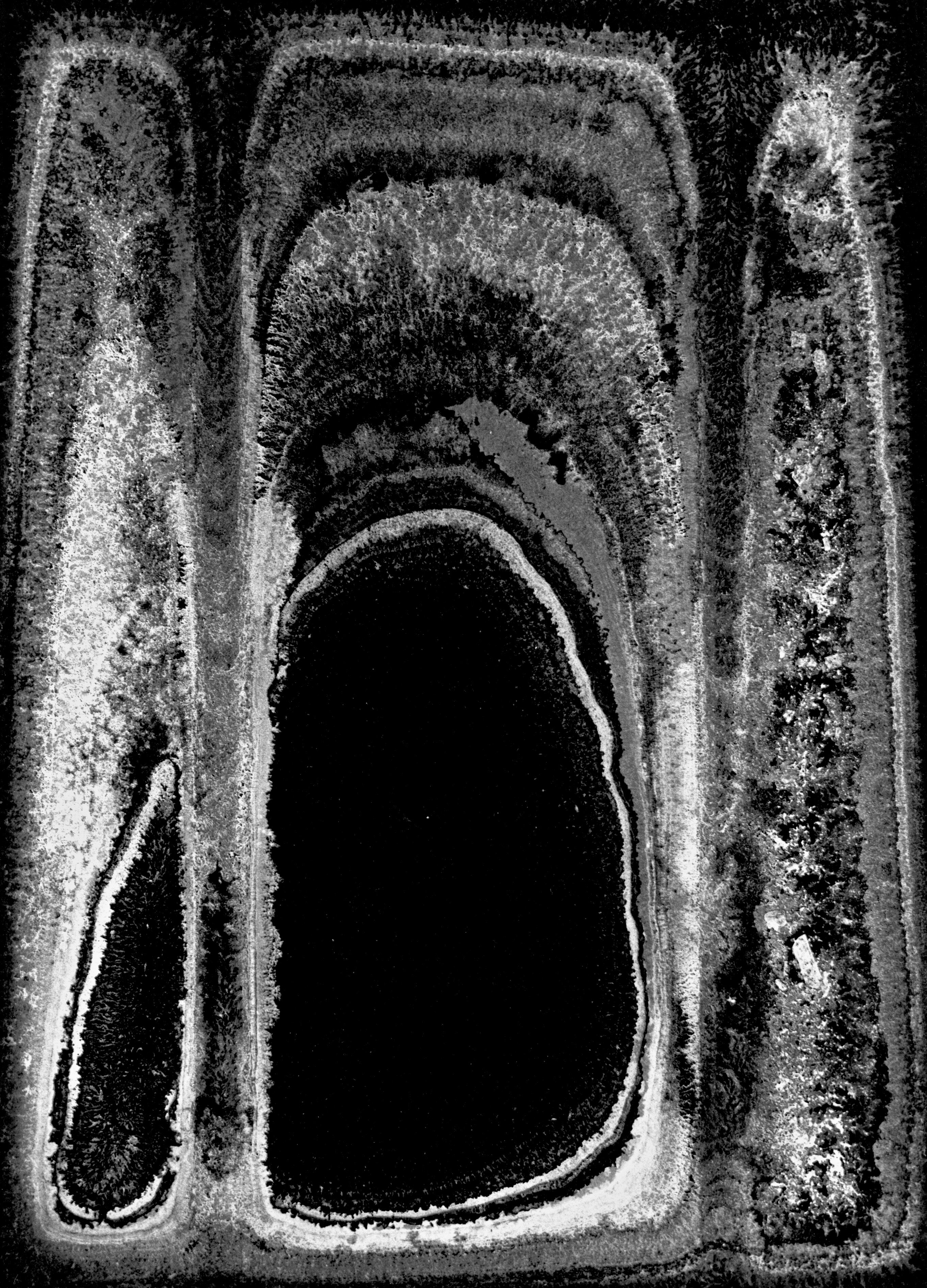 I have read the image in several ways: literally as a moment in the evaporation of some salt, perhaps on uneven pavement [just a guess]; figuratively as a triptych, with hinged side panels; metaphorically as an ensō ['circle' in Japanese, but much more than simply a round geometric figure], and/or as a door, a portal. As far as I can discover, Chiarenza himself hasn't ever 'explained' the image, which is entirely consistent with his usual practice, and exemplifies (as Elizabeth Schlatter puts it in her Introduction to the above):

...a basic tenet of Carl's philosophy about photography, which is the idea that "pictures come from pictures." Every single image produced by anyone has a connection with another image, sometimes explicitly and other times more subtly. (pg 17)

So I am happy to acknowledge this image as an inspiration for some threads that I'm currently knotting into photographic macramé.

Another book I happened upon recently is Douglas Beasley's Zen and the Art of Photography Handbook, which includes a number of his "accidental ensōs":

The ensō is a circular symbol most often painted in a single brush stroke... It embodies one of the defining aspects of Zen Buddhism, no-mind, where one is free from thoughts and emotions while being completely present in the now. It is believed that while in this state of total presence, true creativity can arise. Some Zen Buddhists believe that the character of the artist is fully exposed in how she or he draws an ensō. Some artists will practice drawing an ensō daily, as a kind of Spiritual Practice. For me, finding and photographing these unintentional ensōs is a form of spiritual practice.

I won't claim 'spiritual practice' for my own search for ensōs, but I'm beginning to realize that there's a great deal more going on than the collection of circular figures. Explication takes us into a set of wee-hours thoughts that I had the wit to write down, and that bear very directly on Simplicity and on my own development as a hopefully-ever-more-conscious photographer.

After a very fruitful day of exploring the Public Alleys of Boston's Back Bay, during which I had rather frivolously gathered a series of 'urban ensōs' from detritus and debris underfoot, I awoke with the phrase "objects of contemplation" in the mental foreground. The words were linked to the Chiarenza photograph, to those ensōs I'd harvested, and to the series of doors I had walked by (but not photographed) on Beacon Hill, after the Public Alley adventure. I got up and wrote down a cascade of linked thoughts:

By morning it seemed clear that objects of contemplation needed explication. What follows may be tl;dr for some, but I have to summarize in order to be able to move on to the next thing, whatever that turns out to be. So: objects of contemplation are touchstones; contemplation connects the viewer with the complexity (or sometimes the simplicity?) of ideas and emotions that are implied by, linked to, understood as entangled with the object. Thus a literal door may address many different quiddities of doorness (passage, openness, liminality, barrier, transition, metamorphosis, etc.); an ensō is indeed a circle, but any particular instance may evoke recognition of complexity in the nuances of its execution by the practitioner who limns it. An incomplete (open) ensō, or one which departs from perfect circularity, may be invested by the producer or viewer with meaning, or with mystery. And any new instance of circle or door may lead the viewer to re-collect the insights and conundrums of previous encounters with images of circles or doors.

I'm trying not to mystify or over-invest in the symbolic content of circle or door, and sometimes a cigar is just a cigar, but once one has the idea that a simple object may entrain complexities, it's likely that one will come to savor the variety of those complexities, and thus to seek out further examples of circles and doors. And so the next day we went back to Beacon Hill and began a collection of doors. I'm not sure where that might eventually lead.

Of course there's lots more to say about ensō in the context of Zen, and these passages are a nice beginning, not irrelevant to a photographer's odyssey:

Creation of an ensō symbolizes a moment in time in the life of the artist when the mind is free to simply let the spirit create through the physical body. Ensō is a fascinating expression of individuality as expressed by variations in ink tones, brushstroke thickness, shape of the circle and even the positioning of the single point where the circle begins and ends.
...
This is a Zen symbol of the absolute, the true nature of existence, the duality within life and the imperfection of all things. It is a symbol that combines the visible and the hidden, the simple and the profound, the empty and the full. The very imperfections and contours of the ensō, which must be painted by human hand rather than constructed as a mathematically correct circle, make the ensō a manifestation of perfection. It is perfect just as it is, even in all its imperfection. Ensō suggests to the student to stop striving for perfection and allow the universe to be as it is. Abandon the idea that there is a one size fits all path that ends at some specific point, place or time. When you believe that you have arrived at some final destination on your path, ensō reminds you to start again exactly at the point where you are now and to embrace and enjoy your unique experiences on life's journey.
(https://www.modernzen.org/enso/)