There's no suggestion that we should be reporting to the group on our experience and findings from this exercise, but it's useful to me to collect my discoveries for my own edification and later perusal. It surely turned out to be an interesting half hour with a gourd I'd bought a few days before (thinking that I might try to photograph it, don't you know).
Cucurbita pepo, an ornamental gourd form of the Mesoamerican squash 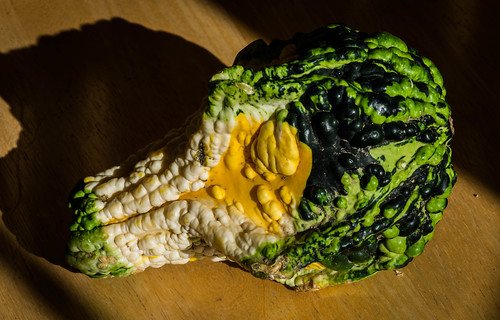 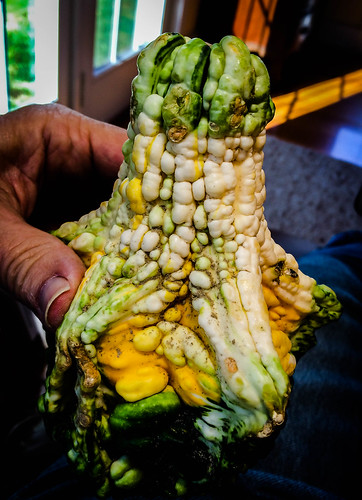 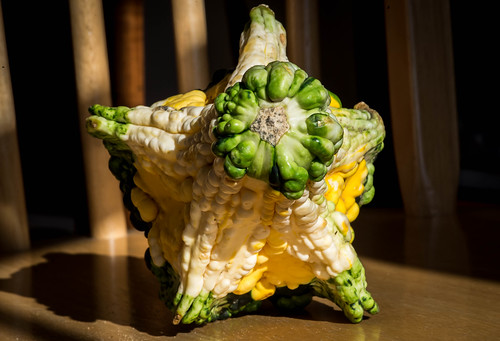 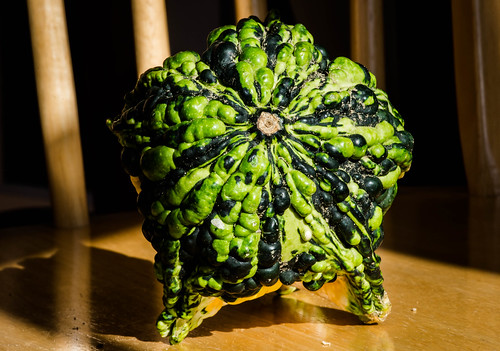 I wrote down the bits of thinkage as they ran through my mind while I explored the gourd, and I record them here in approximate order:

nubbly; 5-cornered, pentagonal; bits of very fine sand; colors interdigitate; some of the lumps piebald, others zoned by color; fissures; can't take in the whole thing, it's relentlessly 3D; how could one photograph it, except as a gallery of views?; "imperfections" here and there, irregularities; note stem and flower ends (pentagonal); within are the seeds which are the whole purpose of the thing (are color and design irrelevant, or if relevant, how? perhaps co-evolved with people who propagate, attracted by the irregularity of color and shape); it's a bomb of seeds, only detonated by breaking (via rot, or after dessication); note all sort of bruises and bits knocked off; ?what's the function of the lumps, vs. smooth varieties?; ephemeral on the scale of months, but will it dry or rot?; some very precise lines in green margins with yellow, but others less definite...

I tried to draw it, but I have no skills in that line. I could render the star shape, but the complexity that makes the gourd so appealing to eye and hand completely escapes my ability to make a drawing. I'll try again later, as a separate exercise, and try to represent the features my eye revels in but hand can't translate into lines.
the stem end: 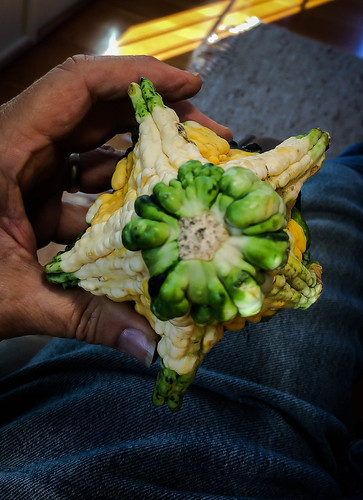 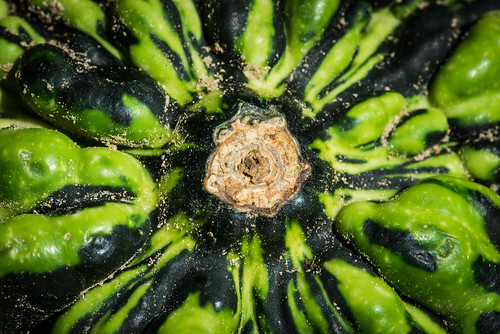 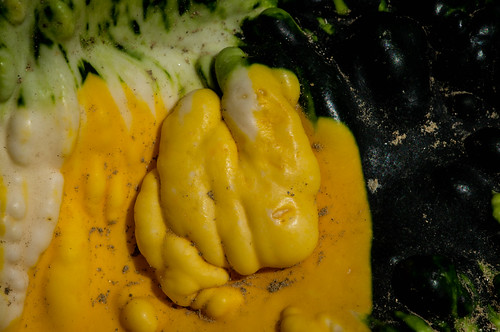 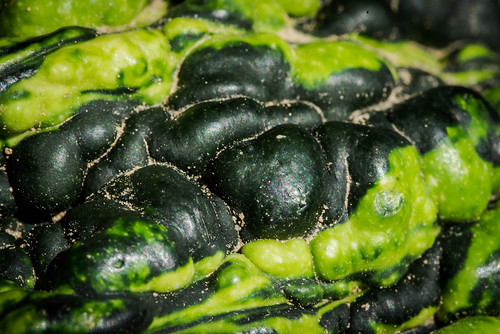 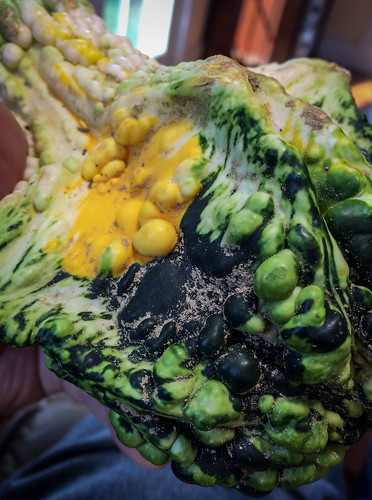 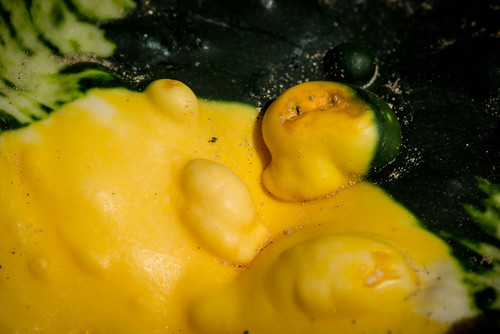 Since the half hour spent on this exercise earlier today, I've found myself noticing that I was noticing more things—patterns in the branches of trees, arrays of gravel on the driveway, various vegetal details—and I've been pausing to pick up the gourd for another bit of appreciative examination whenever I pass by.

And the next day: I've been thinking about the interaction with the gourd off and on, constructing more elaborations of those recorded yesterday. I'm charmed by the Goethian sense in which this one instance is in a manner of thinking all squashes, and by the realization that the gourd represents a grand historical process: the trio of corn-beans-squash is the very foundation of Mesoamerican civilization, and in holding the gourd I am in a powerful sense holding all of that in my hand.

The appropriate response for that insight is to repeat the exercise with another gourd from the same purchase. 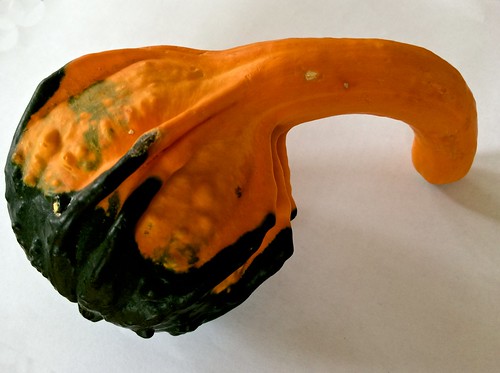 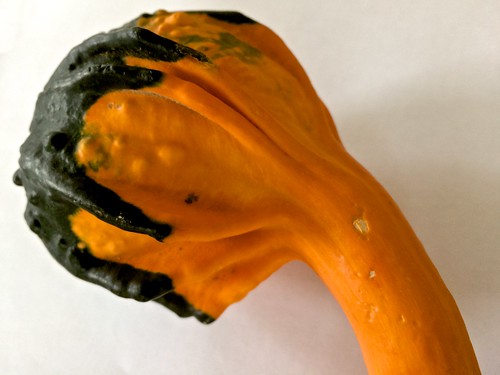 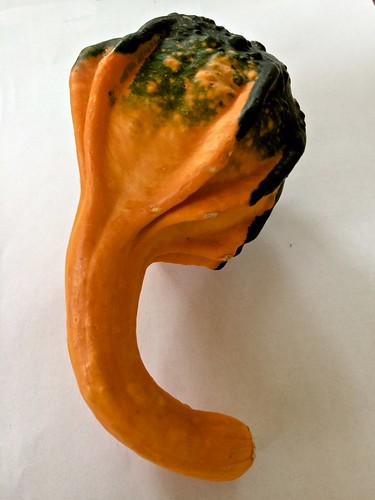 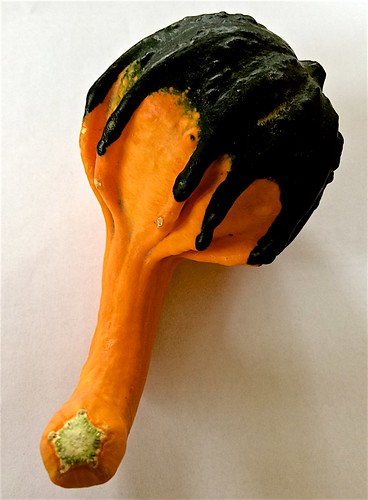 My findings ('thinkages') from this examination build upon what I'd already discovered, but wander further afield, into realms and territories that belong to other parts of my life. And so it is with pretty much any narrative, once it starts rolling. The same thing happens with photographs I make or encounter, and such tale-making is one of my chief joys. So here's an attempt to keep track of the cascade of thoughts and connections as they unrolled over 20-odd minutes of contemplation and exploration of gourd #2:

5 is the basic metric, 10 ridges with 5 slight division boundaries between each pair. But why 5? 72 degrees, perhaps derived somehow from radial symmetry; very distinct margins on this gourd, almost like wax drips; it's like an orange, with a long curved neck attached to the spherical body; a creature with a long drooping snout and an eye (top left photo above); spherical basic entity dominates, not the nubbliness of gourd #1; a distinctly pentagonal stem scar. The gourd is /designed/ to be separated from the plant, and then to heal the wound; the plant might die, but the gourd carries on with its cargo of seeds; vastly more seeds than necessary for propagation, /designed/ for wasteage; what's the neck for? The tissue must have some function in between plant + seed case + flower; unseen/missing here is the essential pollinator—the insect that crawled into the flower and moved the pollen from anther to pistil; Goethe would see the gourd as the outcome of a glorious process, a dynamic repeated many millions of times every year, in gardens all over the world; NB that this gourd is a domesticate, a product of selection and coevolution...