Assembling the Metanarrative:
speaking prose, whiffs of the madeleine, and a bit of High Fidelity

Here's what I started with a couple of years ago, as I began to think about what I might write for a 50th report:

And there are other resources that I might manage to repurpose, like my Library Thing tagcloud, and the wherewhen and At Washington & Lee timeline and Logfiles timeline (all built with MIT's SIMILE, but not updated in far too long).

Once the idea of a Grand Scheme had bloomed, and was already hurtling forward, all sorts of side projects began to suggest themselves. For example, this pair of images spans 40 years but evinces various continuities. The one on the left is a 1971 selfie, just one of many in a saga that we put together for Kate's 30th birthday [that was in 2000]; I took its twin two years ago to accompany an Artist's Statement for a photographic exhibit : 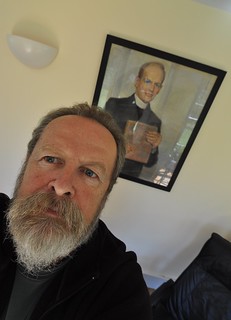 I'm still considering whether to labor over the pre-Harvard backstory, which in my case has four locales (Quincy St. Cambridge 1943-1953; York St. Andover 1953-1956; Paseo del Mar San Pedro 1956-1958; Chadwick School 1956-1961), each clearly formative and still exerting influences on the present, as I knit and cross-connect excavated memories. But perhaps chronology and locus would be less interesting than evidence of the senses, and whiffs of the madeleine are omnipresent.

Think of bread, its textures, colors, tastes, fragrances... it's easy to begin to catalog a lifetime of pleasure and pain. One of my earliest memories is of Kasanof's pumpernickel, shiny loaves bought at the counter of the Wursthaus in Harvard Square, a rectangle of paper glued to one end (union label and baker's mark). Thick slices could be cut, or ragged hunks torn from the loaf. And the pleasure of gnawing on the stale heel of the loaf after a few days is still with me. That memory evokes my first encounters with Anadama, Katherine Rusk's oatmeal bread, homemade white, caraway rye... and with California sourdough, Syrian pita, French baguette, Swedish limpa, Boston brown bread, steamed pao, and any number of almost-breads: croissants, muffins, brioches, knäckebröd, Armenian lavash, Navajo fry bread, waffles, Breton galettes, tortillas... Most of those bread memories link to other spatiotemporally related fragments, and on and on. 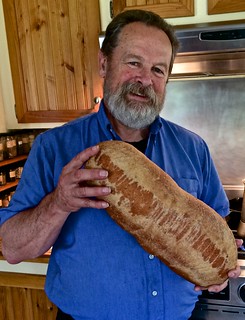 I don't doubt that everybody experiences similar cascades, and perhaps that's exactly the point. Narrative mappings of such mental geographies are basically solitary pleasures, unless you're Proust, but they can also be enjoyed as the armature around which a life may be wound, and perhaps seen as a key to the mysteries of personality formation and aesthetic pleasures. While bread is one exemplary domain for me, I could as easily draw out a lifetime of musical examples or photographs or landscapes as provocations to memory cascades.

It's a curiosity (make of it what you may) that classmates James Cox, Bill Baker, Tom Lee, Rick Lordan and I were in the 4th grade class (which might have had a total population of 20 or so) at Brown & Nichols in 1952-53. That proved to be of no significance 9 years later, when we reencountered each other as freshpersons. Indeed, this has been my experience in most of the granfalloons in which I've found myself over the years. I've never been very clubbable, and many social settings give me the jimjams, so betimes I wonder who are my natural companions? In whose company do I really belong? Sometimes it seems that the Seven Sages of the Bamboo Grove are temperamentally about the closest (except for the alcohol part).

Another factoid: of my freshman roommates in Lionel B-21 (George Brown, Cyrus Kamundia, Dan Woods), I am the sole survivor (well, Dan may be hiding somewhere, but even the Alumni Office hasn't been able to flush him out).