I went to Nova Scotia to study Regional Systems, a level of organization defined by activities within and exchanges among spatially-defined collectivities. People recognized these entities (The South Shore, The French Shore, The Valley) but their boundaries were imperfectly approximated by official definitions (counties, incorporated towns) and their internal structure and dynamics were a puzzle. Anthropology had rarely explored regional levels of human organization (being largely focused at the level of the face-to-face community, or in ethnically-defined entities) and was not much inclined to the study of historical processes. Nova Scotia seemed to offer a well-documented past and an orderly present.

The basic insight (articulated in my research proposal) was that pretty much anything could be located and represented in geospatial layers, amongst which one might query and interlink and analyze. In the light of subsequent development of GIS this seems obvious, but in 1972 it was within the ken of geography but not anthropology. I'm still exploring those possible linkages. Relational databases, areal statistics, GIS software... those were the tools I needed to do what I proposed, but in essence they'd not yet been invented.

Almost the first thing I did upon arrival in Nova Scotia in May 1972 was to pick up the telephone book and start idly leafing through it, discovering that it was organized by exchanges, and that most exchanges had clusters of surnames (in the Pubnico exchange, 40% of the listings were D'Entremont households). Within a few days I started making lists, collecting together the locations of people who shared a surname. Here, I thought, was the data for an empirical analysis of regional structure, based in kinship and demography. I later added surname distribution data from 1896 and 1914 business directories (which purported to list all households in Nova Scotia, by location) and residence data from obituaries, and thus had material for analysis of internal migration history. Eventually the lists became surname distribution maps. I can't adequately account for why I never "finished" the analysis. 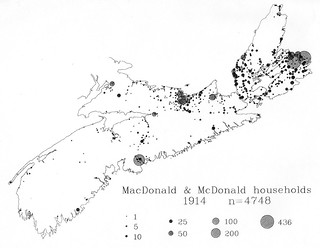 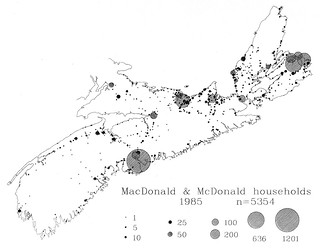 Another peri-anthropological activity was the accumulation of many hundreds of photographs of (mostly anonymous, and mostly dead) Nova Scotians, readily available in junk stores in the 1970s. I christened the collection Nova Scotia Faces and have spent the last 40+ years spinning stories out of the trove. I can easily convince myself that this activity is a sort of anthropology, an unpacking of stories borne by and hidden in ephemera. The final form (book? website? exhibition?) continues to elude me.

As for formal fieldwork: I explored back roads of the counties comprising the Annapolis Valley, photographed barns, traced land use in aerial photographs, pored over government statistics, read local histories and newspapers, talked to farmers and shopkeepers and hitchhikers and government officials... and gradually found stories to tell. One day I saw a truck flash by and commented that Robin Lawrie must be shipping chickens today. Betsy said: "I think you're ready to write your dissertation." And so I did, braiding the various stories into what seemed to be coherence. I rented a Selectric and typed it myself, then boxed it up and sent it off to Bill Skinner at Stanford. He commented that, in all his years of supervising dissertations, nobody else had ever delivered the completed opus on the promised date. I went to Stanford for the (entirely painless) defense and was done, PhD Stanford 1976. The PhD insured job security and added an extra fillip of dignity.