31 March 2000
A question yesterday afternoon from Rabia Sandage projected me into a flurry of hunting and data-handling. She wanted to know what geologists have to say about hollows, and chasing down answers to the question has consumed a lot of the last day... thanks to my habit of following digressions. Along the way I learned some useful lessons about ArcView, Excel, assorted other bits of software. Here's today's result:

Remembering the Linguistic Atlas maps of various lexical items, I started off thinking about toponymy and how much fun it would be to be able to make maps from gazetteers, to visualize the distributions of entities like runs and branches and coves and gaps, and to see them in their topographic context.

I explored a number of perspectives, looking up the term in the Dictionary of American Regional English, poring over The Southern Highlander and His Homeland and Night Comes to the Cumberlands, and I queried the USGS Gazetteer ("%hollow" gets 1154 in VA, 1037 of which are 'valleys' in USGS parlance) and captured the resulting list.

Next step was to strip out the HTML code and add tabs (^t) using Word and WordPad, then move the results into Excel and do various manipulations (including translating degrees-minutes-seconds to decimal degrees) to finally produce a .dbf file that could be imported into ArcView and integrated with a basemap in the same coordinates. But it worked.

The GNIS server has an FTP site whence one can fetch entire state coverages... just how to query them will be interesting to work out, but Access might prove useful.

1 April
I retrieved the VA_deci.gz file, some 1.5 MB, and I'm trying to clean it up. It proves to have decimal degrees as a field... so if it is possible to set it up for ODBC querying from Access, it will be relatively easy to run into ArcView. It's going to be pretty hairy, though...

I did process the WV hollows, to the point that I have the requisite .dbf file all cleaned up and ready to go into ArcView.

2 April
I woke up thinking that UNIX might be the way to deal with all those data... Continuation, involving grep and other stuff to get at the contents of the GNIS database... and here's a brief UNIX command summary from the adventure, so that I can find it again myself.

So here's what I have after an afternoon of messing about: 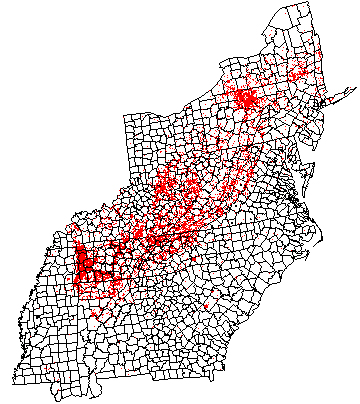 As with all such things, more questions than answers... and what about Gaps and Branches and Runs and Turkey and Dismal and Laurel and so on... But now I know how to find out. Clearly, an Atlas of Appalachian Toponyms to fill that much-needed gap in the literature. 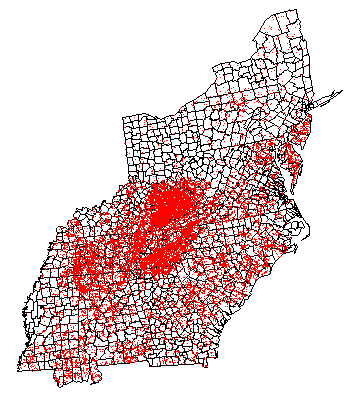 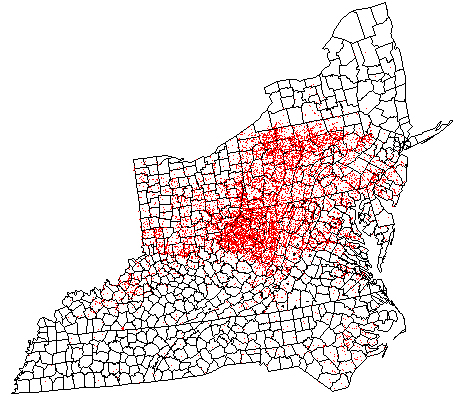 4 April
A map of gaps, and the same zoomed in to where they concentrate

And brooks and the same zoomed in

And a composite map of the Northeast: creeks in heliotrope, brooks in red, and rivers in blue.

11 April
Etymology and suchlike? The OED is as eloquent as ever.