I’ve seen hundreds, maybe thousands of Japanese paintings and woodcuts, but only really looked at a handful, and with even fewer have I had anything more than the shallowest understanding of what I was seeing. A couple of months ago I heard about an exhibit at the Harvard Museums, Painting Edo (mid-February through July), covering about 250 years (1615–1868) and seeming to be an opportunity to repair my ignorance. And then COVID-19 closed museums. So I looked to see if there would be a published catalog, and sure enough Painting Edo: Selections from the Feinberg Collection of Japanese Art appeared… Knowing that it was most unlikely that I’d be in Cambridge by July, I ordered it. Well. It’s a lovely book, and the text overflows with just the sort of explanations I was hoping for. Here’s part of what I read this morning, accompanying the first image in the book:

The Gallery Text is a good start, but Yukio Lippett’s text in the book is eye-opening, and this passage transfixed me:

Bunchō aimed to create a “true view” (shinkei), as stated in his inscription. This term in fact designates a literati concept of great complexity shared among advanced painters and intellectuals from the mid-Edo period onward. Rather than referring to any notion of optical truth or reality, it was rooted in the ability of the painter to capture the subjective experience of a site or scene through picture-making. Works in this tradition invariably involve some combination of motifs identifying the site and a discursive framework—typically provided through an inscription—that refracts the image through a particular emotion, interpersonal exchange, or sensory experience from the encounter. In many cases, the inscription incorporates a citation from classical literature, thus fashioning this moment of encounter as both contingent and eternal. The true view was a fundamentally interrelational concept that imbricated the singular, intimate experiences of an artist with those of earlier figures who had commemorated similar instances. (pg 15)

So much to admire here: an elegance and precision in the prose (discursive, refracts, imbricated), a lucid explication of shinkei, a generous nudge toward thinking differently about how and why text might accompany images.

Some more of the text accompanying this image:

The scene is conceived as if observed from a low vantage point among the river reeds, looking up and through them at the moon… The powerful sense of immediacy thus generated by the design is reinforced by the fact that Japan was a floor-sitting culture: viewing a painting from a standing position would have been highly irregular, and accordingly, Grasses and Moon anticipates the vantage point of a Yaozen patron looking up at the scroll from the tatami mat-covered floor. (pg 14)

The image on the book’s cover is a marvel itself: 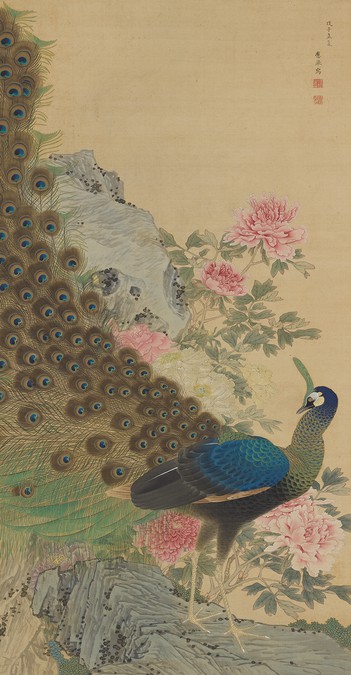