Today I was listening to Stephen Fry’s reading of Sherlock Holmes as I walked, and was diverted by this bit of Holmes’ practical philosophy:

I consider that a man’s brain originally is like a little empty attic, and you have to stock it with such furniture as you choose. A fool takes in all the lumber of every sort that he comes across, so that the knowledge which might be useful to him gets crowded out, or at best is jumbled up with a lot of other things, so that he has difficulty in laying his hands upon it. Now the skillful workman is very careful indeed as to what he takes into his brain-attic. He will have nothing but the tools which may help him in doing his work, but of these he has a large assortment, and all in the most perfect order. It is a mistake to think that little room has elastic walls and can distend to any extent. Depend upon it there comes a time when for every addition of knowledge you forget something that you knew before. It is of the highest importance, therefore, not to have useless facts elbowing out the useful ones.
(from A Study in Scarlet)

This is just about the diametrical opposite to what I’ve thought all these years, the antithesis to my patron saint Hugh of St. Victor’s dictum:

(Learn everything,
you will see later that nothing is superfluous)

(and see my Goals and Methods of Teaching as summarized 25 years ago)It’s the curation of stuff that makes the difference between the lumber-filled brain-attic and the well-oiled engines of synthesis and retrieval to which one aspires. I (seem to have to) learn this lesson anew whenever I try to make sense of one of my collections, and each pass reveals new interrelations I hadn’t noticed or fully appreciated before.

Among the facets of the ‘foreign’ in English are the substructure of Latin and Greek in syntax and in vocabularies and lexicons. These three books take very different approaches to the challenge of learning one’s way around the complexities, and each makes a distinctive contribution to the young pedant’s verbal armamentarium.

English Words from Latin and Greek Elements by Donald M. Ayers [1965] (a textbook, with lessons [26 from Latin; 25 from Greek] and assignments to accompany each lesson)

Greek And Latin In Scientific Terminology
by Oscar Edward Nybakken [1959] (more than half the pages are word lists, with the prefixes, suffixes, and numerals that vivify the roots)

Ayers’ approach is paradigmatic and based on “word elements”: the student is to learn bases, learn suffixes, do Assignments for each lesson: 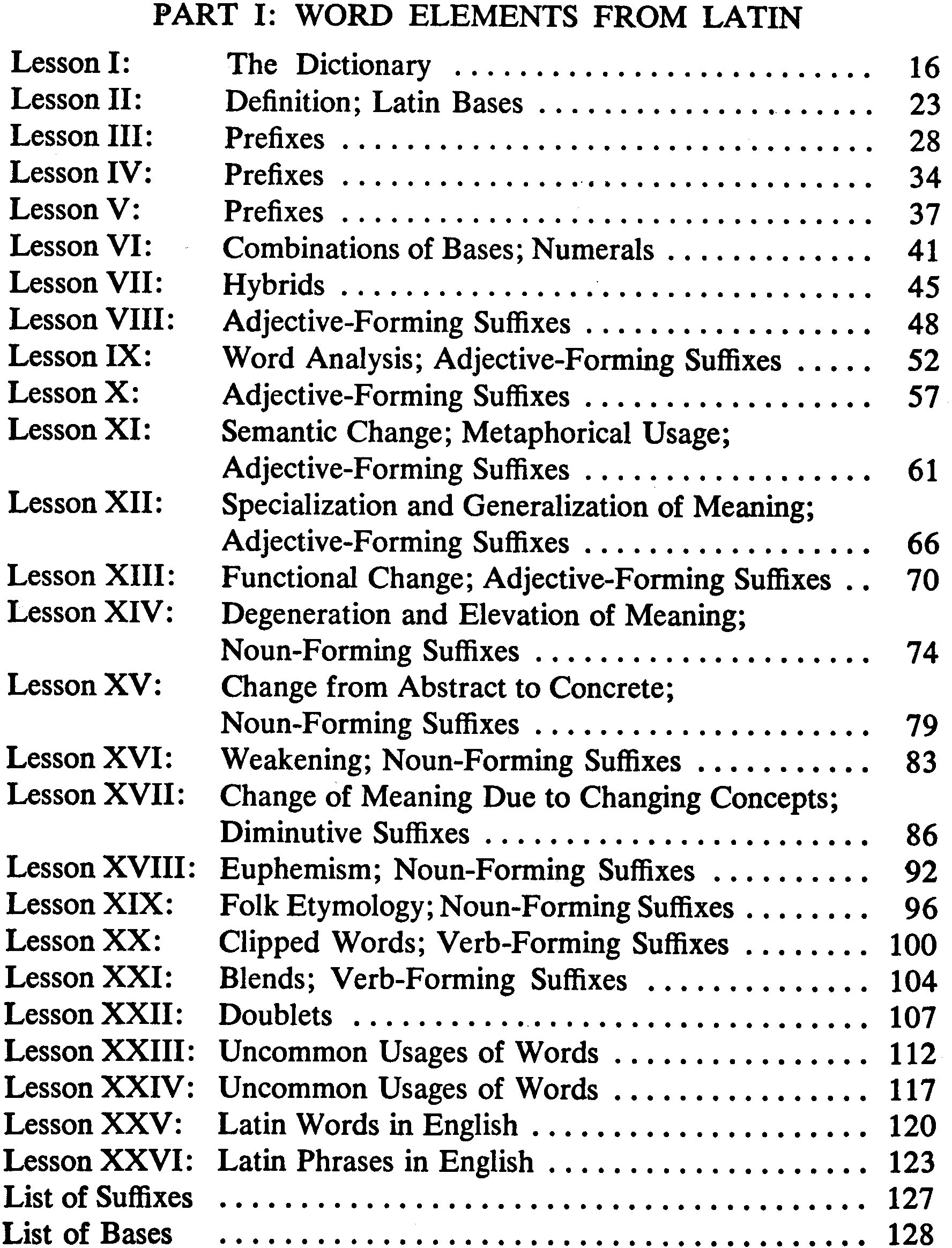 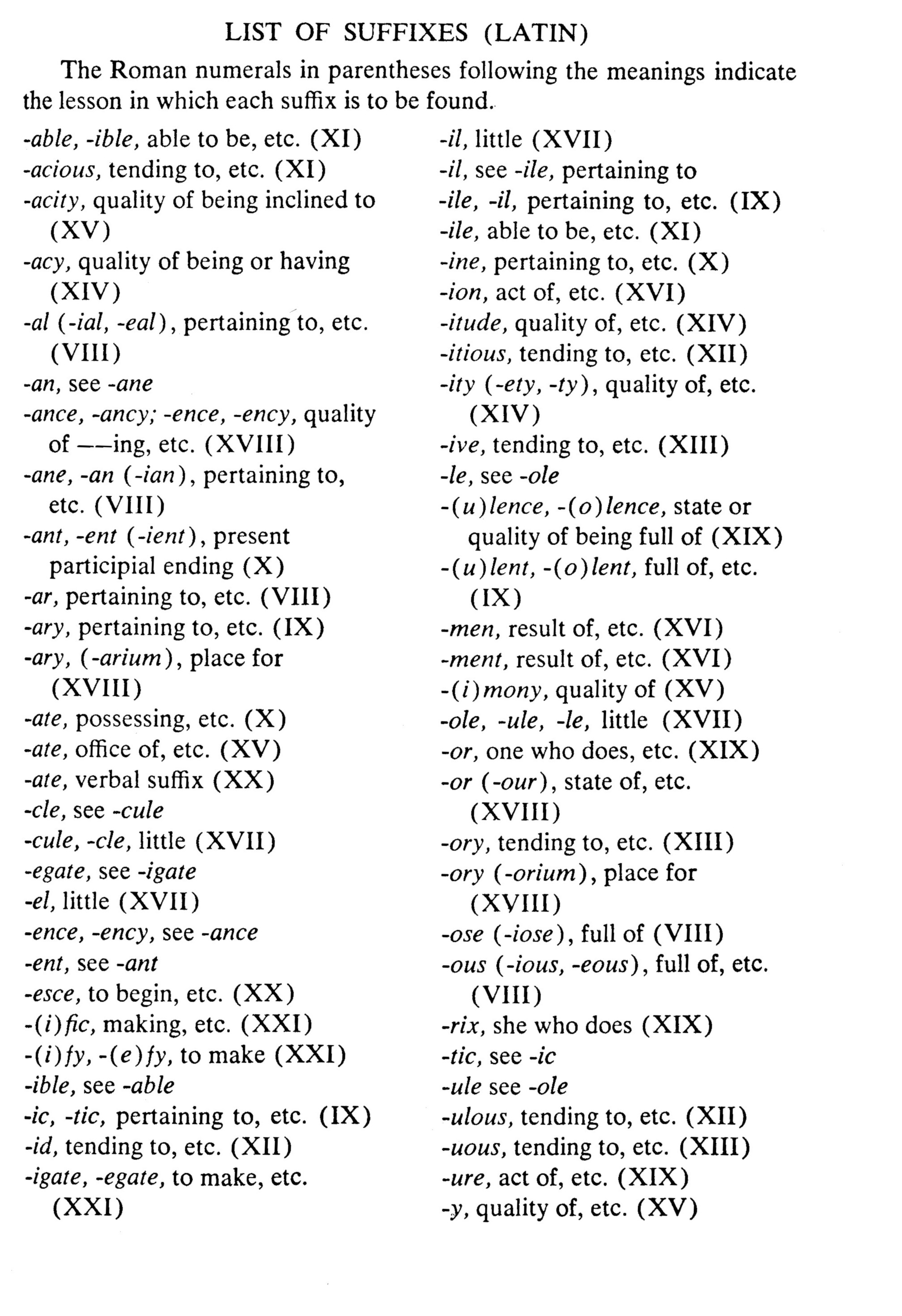 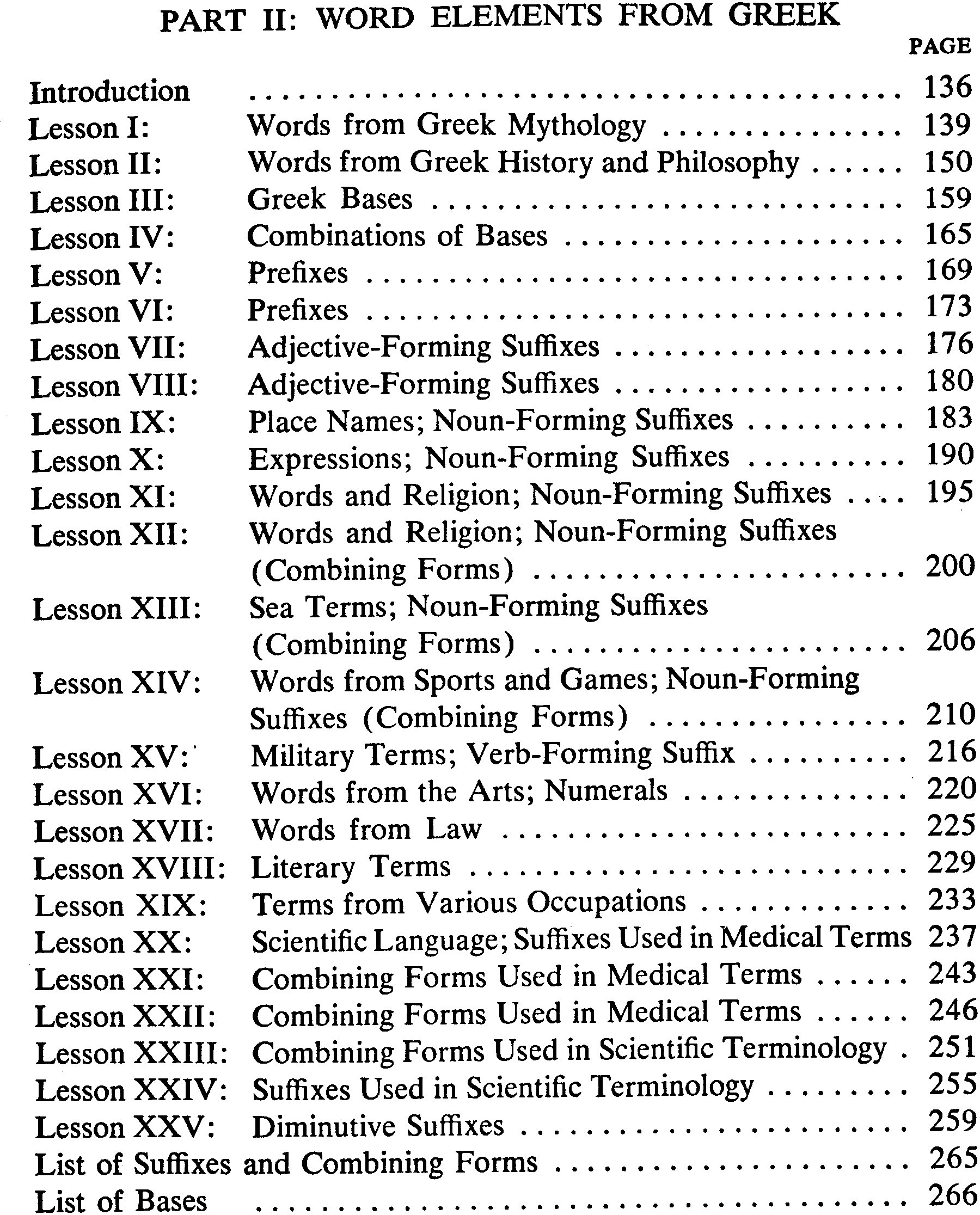 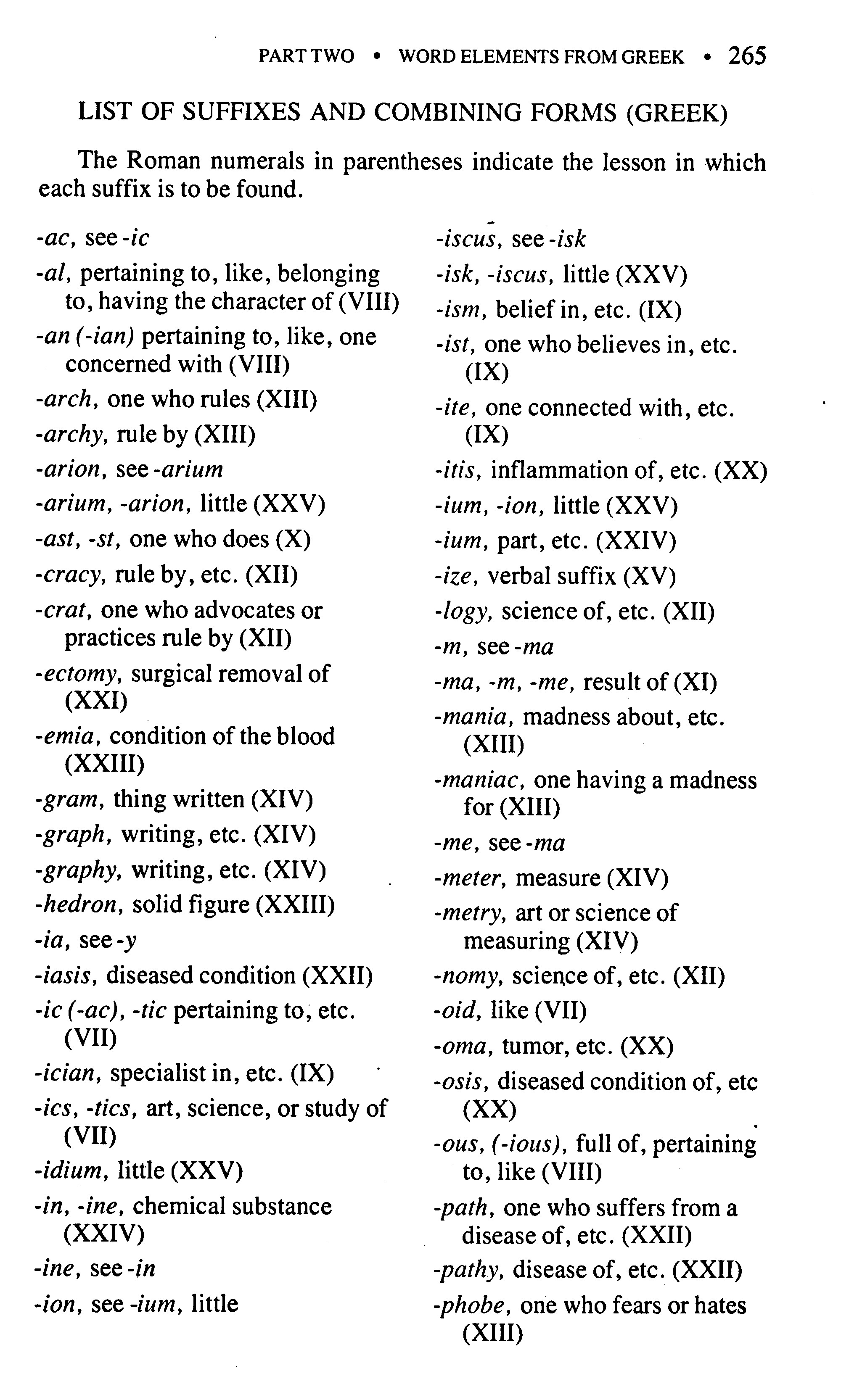 Most of the technical words used in medicine and dentistry have their origins in the Greek and Latin languages, and over two-thirds of present-day medical English is derived from Greek alone… The traditional source for names of plants and animals has long been the classical languages. The more technical and highly specialized the terms are, the higher is the percentage of those which have their origins in Greek and Latin, especially in Greek… Word coinages, necessitated by the perennial advances in scientific fields, find their most suitable and frequent origins in the ancient languages of the Greeks and the Romans… 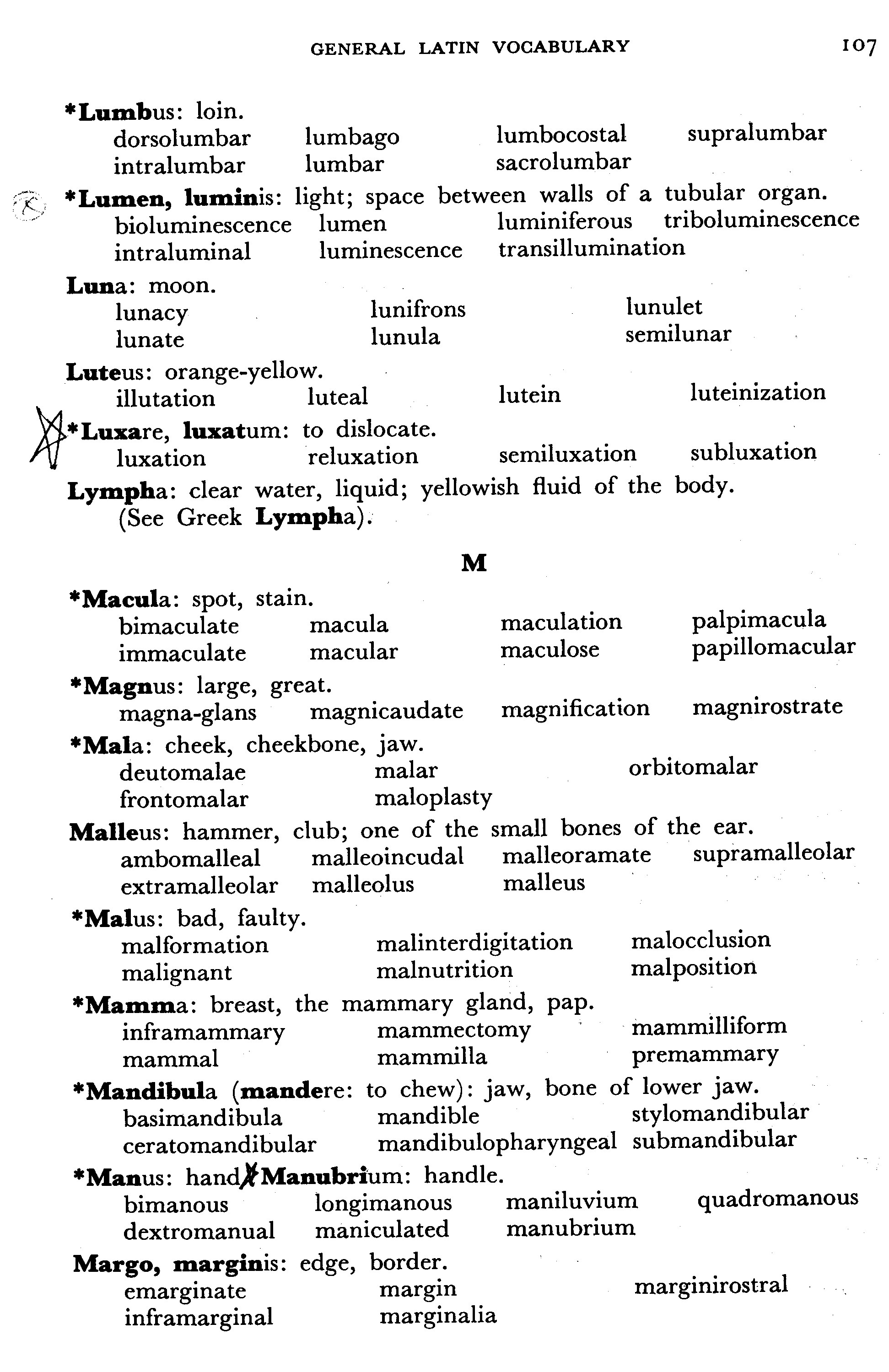 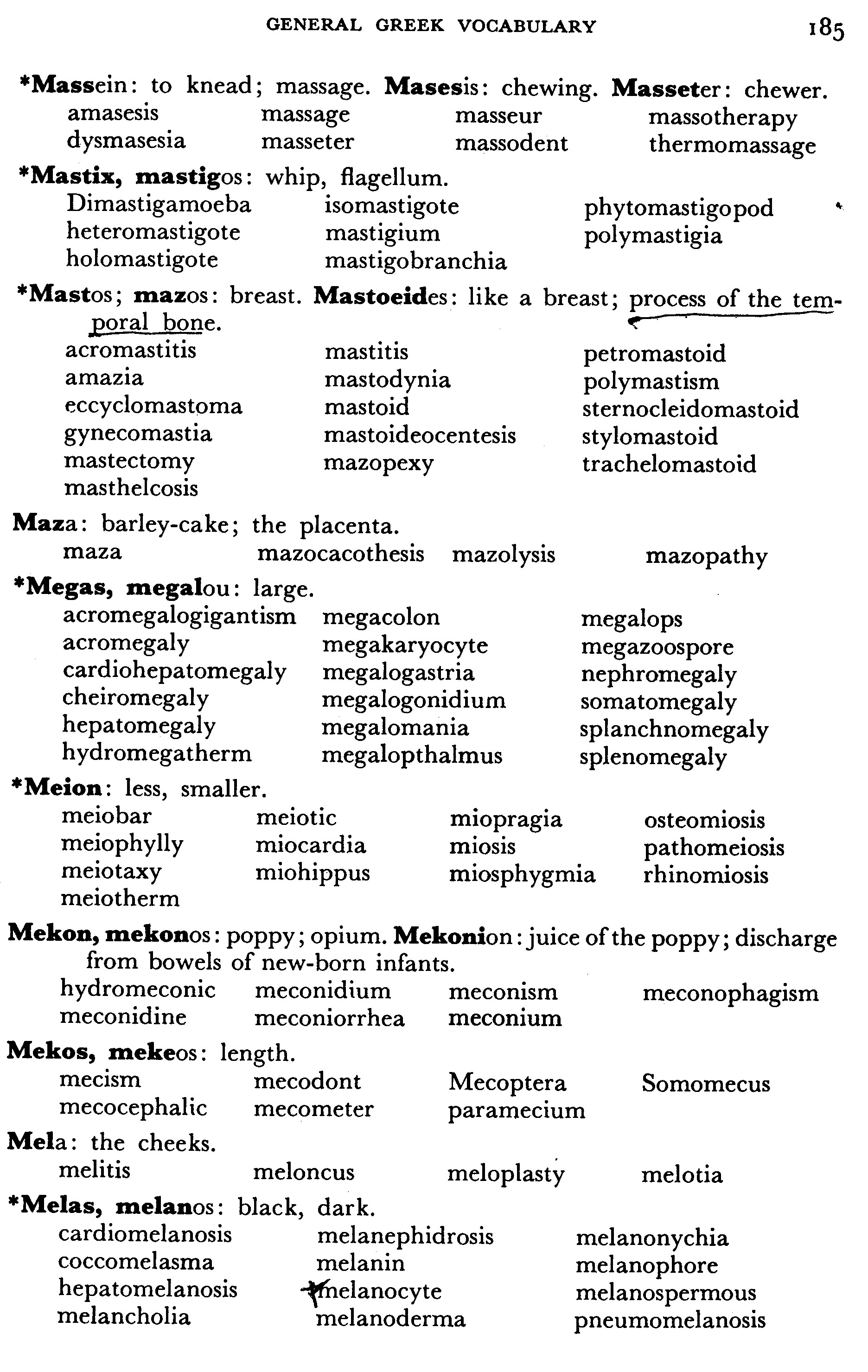 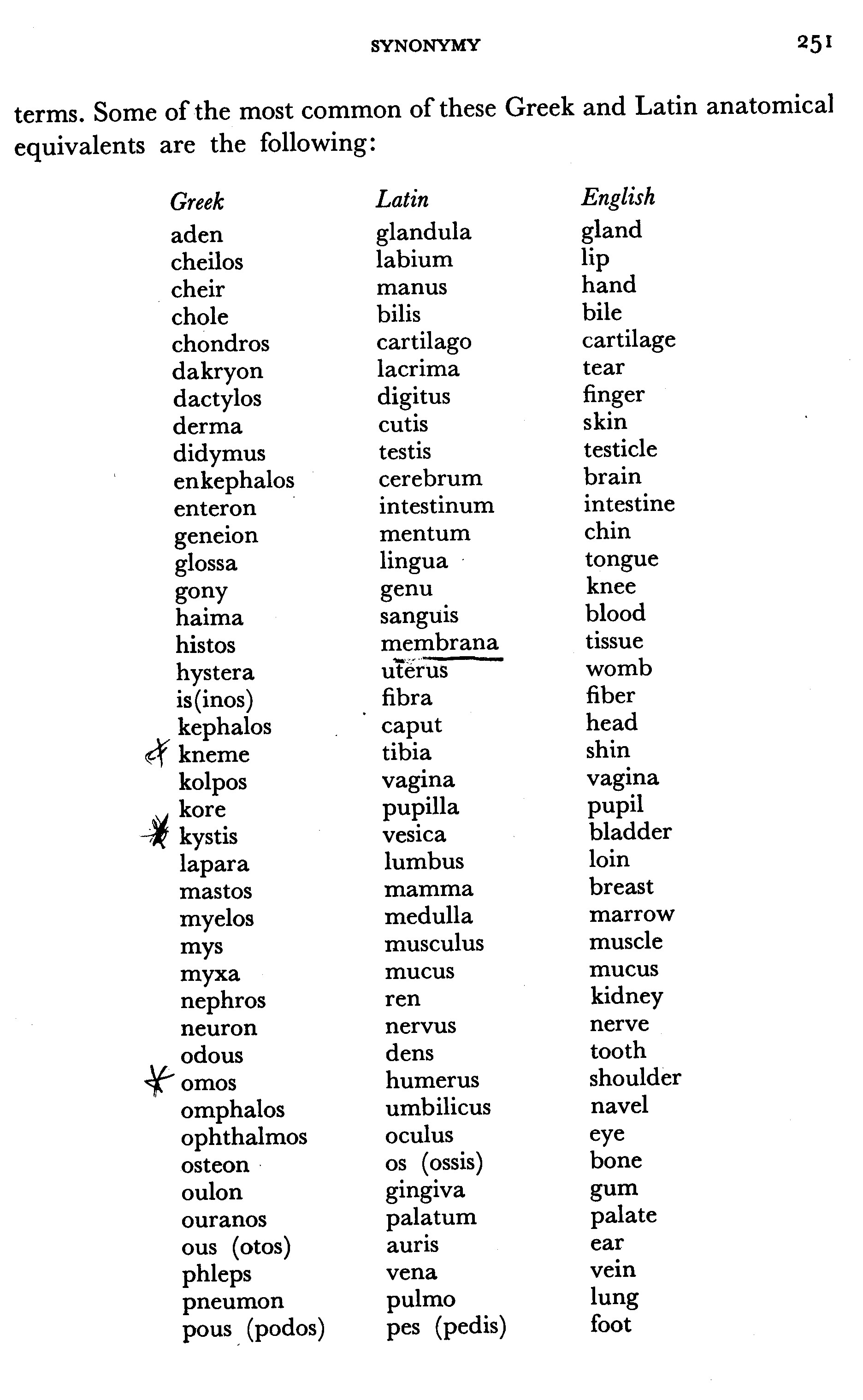 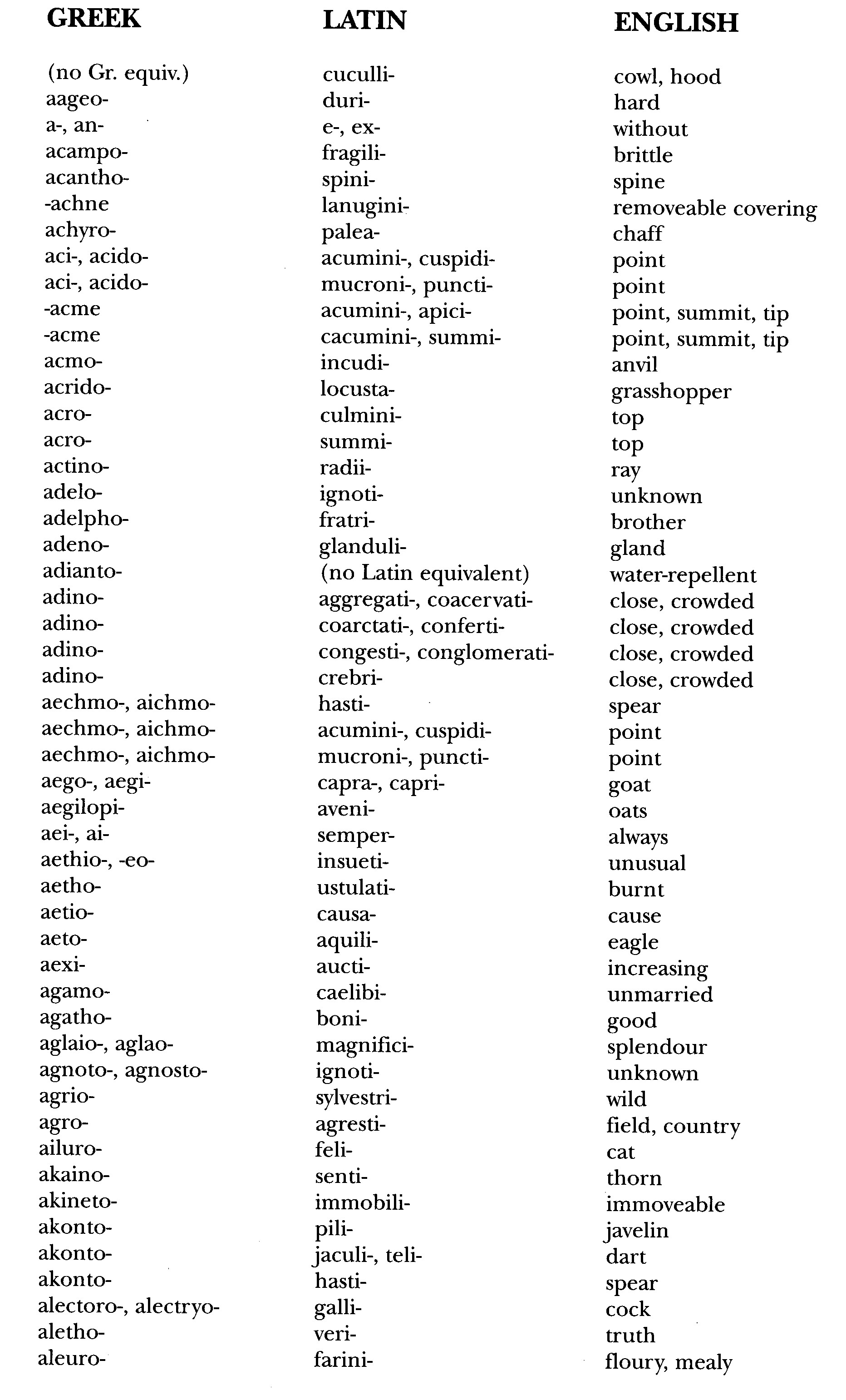 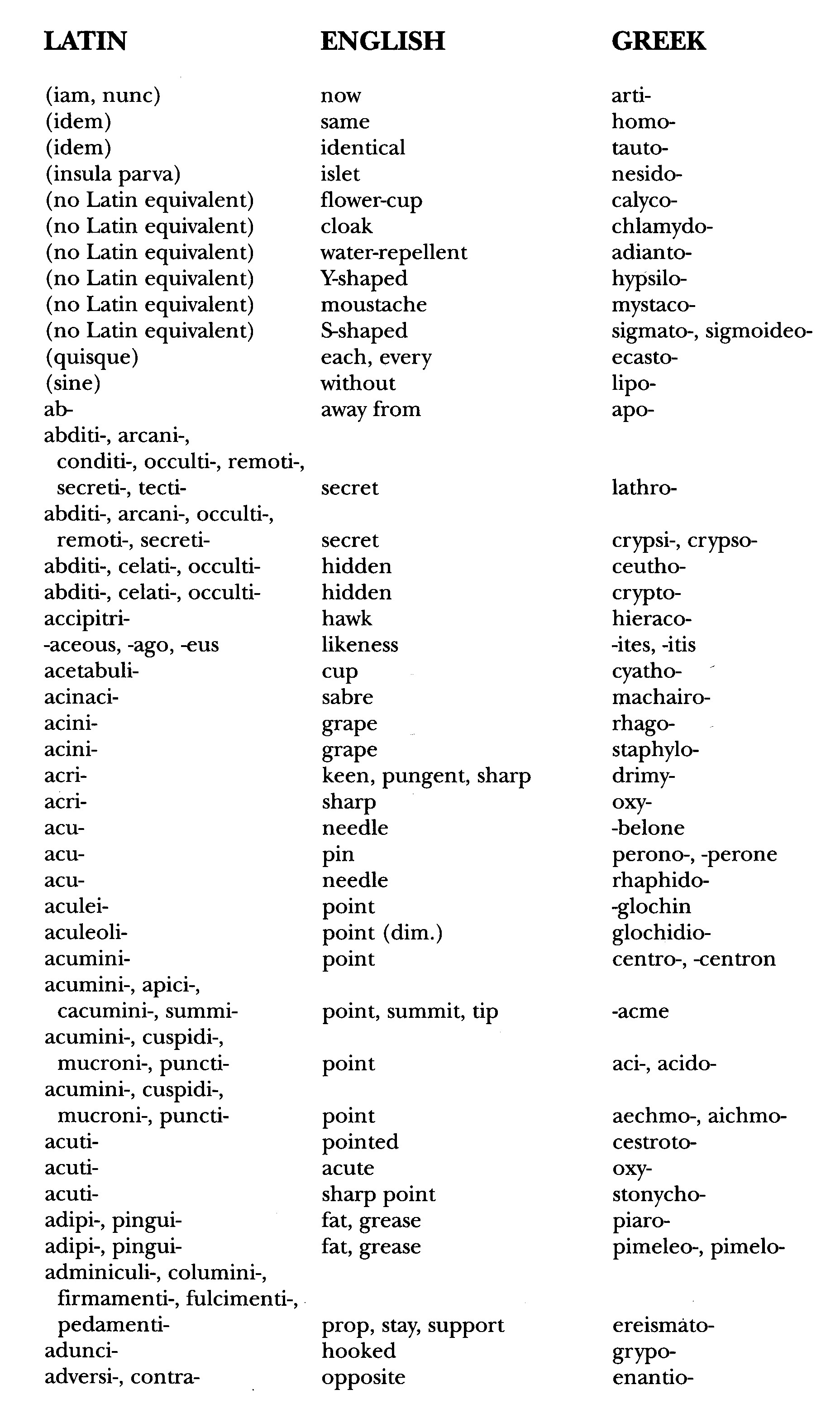 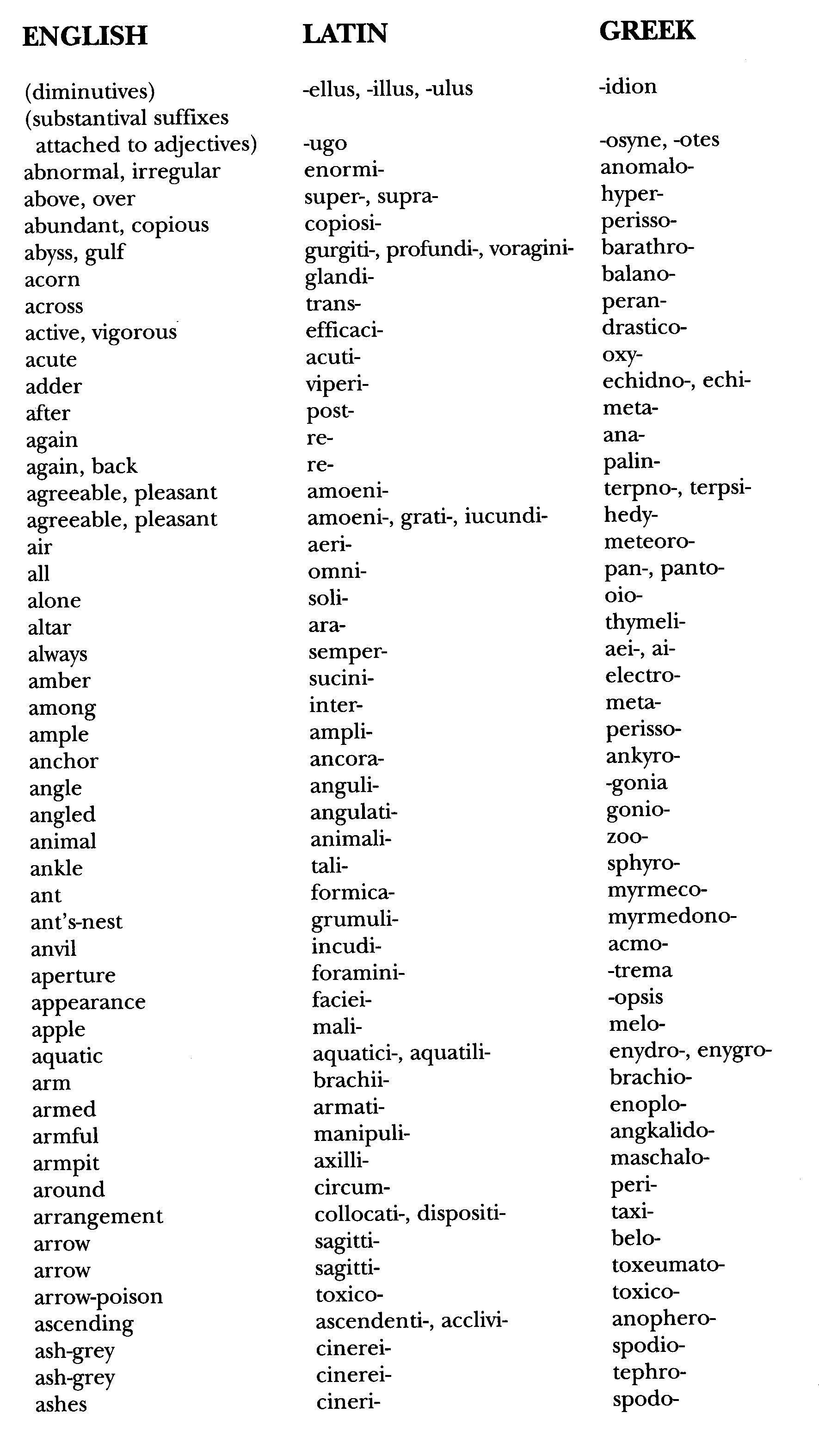 This delicious compendium is published by the Royal Botanic Gardens at Kew, and includes this marvelous bit of British prose: 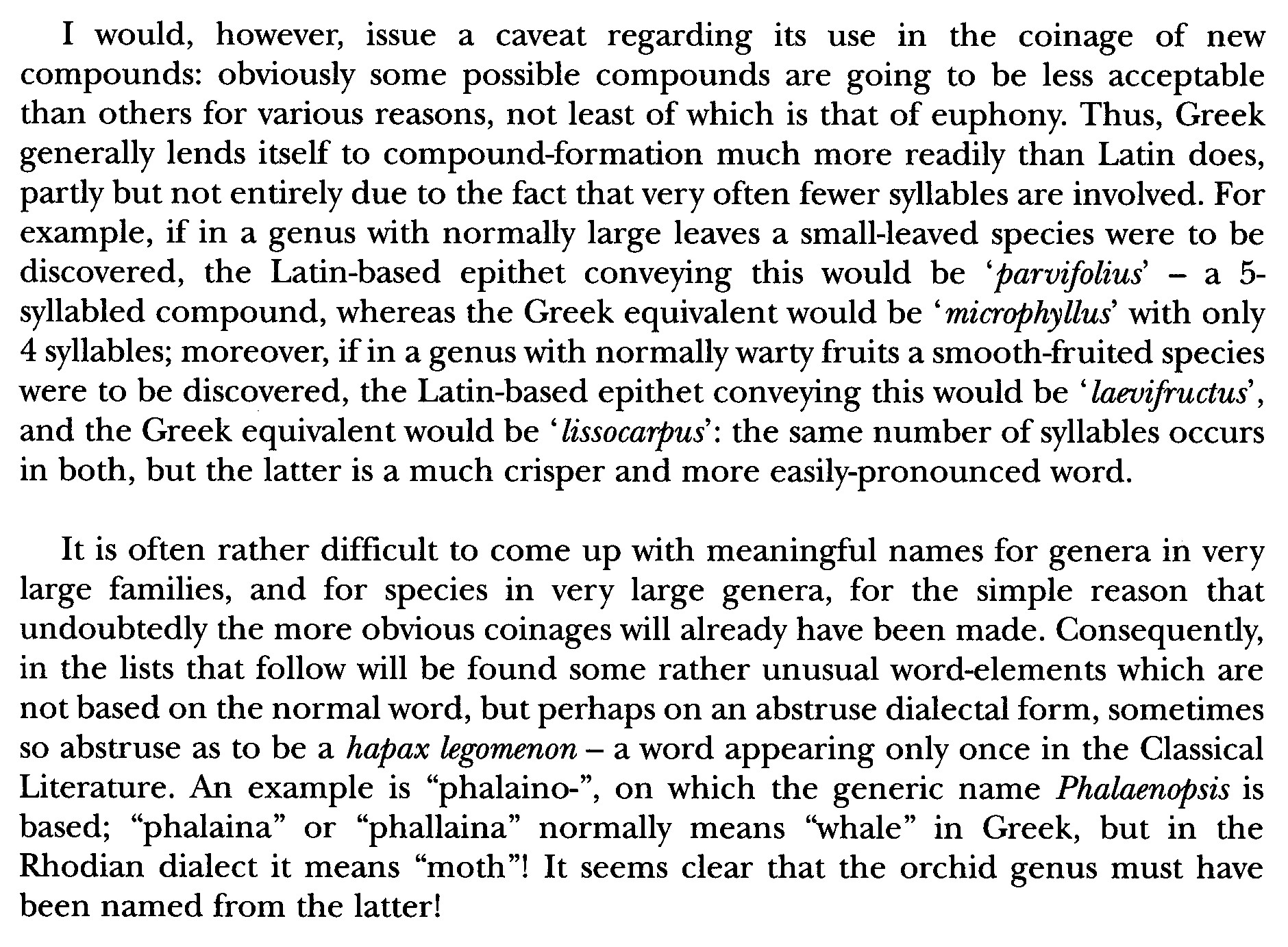 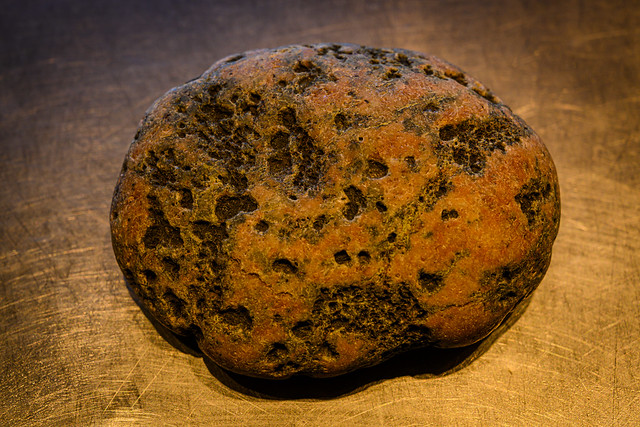 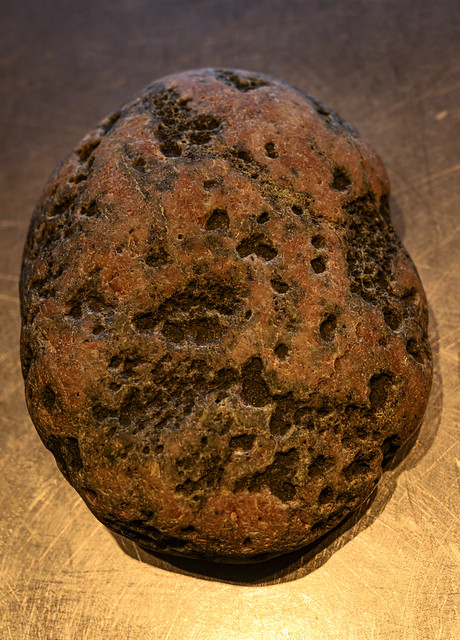 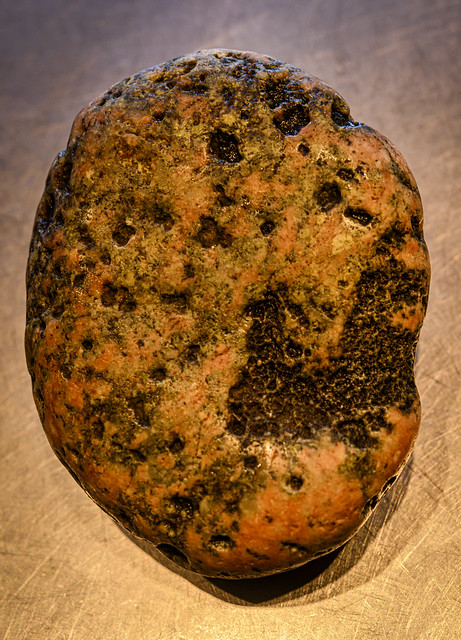 Last night I took this specimen along on a visit and our hostess said “oooh is this a gift?” and I was immediately protective. “Certainly not!” I said, and immediately regretted my vehemence in defense of my rock, as I hadn’t even photographed it yet. I did make its portrait today, and thus recognized a Lesson in Attachment—one I might have learned (but had clearly forgotten) with the Bodhidharma example cited at the end of the Morphic Resonance post. In what wise is this rock my rock? Why should I wish to hold on to it? Wouldn’t it be better to appreciate it and pass it on so that others could enjoy its verisimilitude? Isn’t it enough to have discovered its several personalities and felt its agency? Yes, yes, 10,000 times yes.

During a visit to Vashon Island, a series of unplanned conjunctions took me to the Vashon Bookshop for a half hour of browsing before our reservation at the marvelous May Kitchen and Bar. This book leapt into my arms:

Stephen De Staebler was my 9th grade history teacher (1957-58), and offered a high-energy version of World History to a class of 15 or so engaged and eager students. He also taught a class in stained glass for 5 of us, with lead and solder and glass cutters, the real deal. He was only at the school for a year, but was unforgettable for his contagious enthusiasm. He went on to become a well-known sculptor and teacher at San Francisco State, and died in 2011. His website (stephendestaebler.com) represents his work quite well. I was something between delighted and gobsmacked to discover a gallery of masks that presage my recent work with lithic personalities. At the very least, we draw upon the same mysterious vein of mimetic imagery (“a term used in literary criticism and philosophy that carries a wide range of meanings which include imitatio, imitation, nonsensuous similarity, receptivity, representation, mimicry, the act of expression, the act of resembling, and the presentation of the self” in its Wikipedia rendering). There’s also this quote to consider:
Much of art is play in the serious sense,
like magic, trying to restructure reality
so that we can live with the suffering.

I’m not quite sure what to do with “the suffering” but I’m pleased to consider what he might mean. It’s the sort of responsibility one has toward one’s well-remembered teachers. Alas, there are only a couple of 9th grade classmates left who remember Steve De Staebler, and I wish I’d been able to convey my thanks to him for what he taught and what he Taught.

I read a fair bit of the increasingly panicked College Disgruntlement/Higher Education Futures stuff, and there’s a vast gulf between the Now and what I experienced 50 years ago… and even a pretty deep canyon between the Now and what I retired from a decade ago. In the landscape of cutbacks and Queen Sacrifice I see nothing that evokes hopeful feelings, and much that suggests that the Way, once seemingly so clear, has been lost irredeemably. The latest case in point is John Warner’s The Problem ASU is Solving, which ends thus:

…we should be clear, in a culture of free-market competition, where education is increasingly viewed as a private, rather than public good, and states are moving to divest themselves of the responsibility to support their public institutions, this is the future for those of us who will not be able to afford entry into what we will come to think of as the “legacy[3]” higher education system.

ASU’s moves like the edX initiative, or Starbucks partnership, are absolutely rational, probably even savvy in the culture we have constructed. They will likely be cheered by Wall Street and Silicon Valley because they present more opportunities for markets that can be disrupted and monetized.

That’s what we should be most terrified about.

[3] I use this word to connote multiple meanings, including the notion that only the children of the already educated, the legacies, will likely have access to such places.

Being about to participate in a multi-day 50th Reunion event at which the glories of a (perhaps the…) premier institution will be trumpeted (and alumni contributions solicited), and where symposia on the menu include “The Awakening of Wisdom–How Do We Experience and Practice It?” and “The Challenge of Taking Collective Action–Societal Meaning” … well, I’m struggling to get the whole thing to come into focus. Maybe I’ll encounter some Wise classmates, and surely there are quite a few who still have faith in Collective Action, but I don’t aspire to membership in either category. Best I can do is to resolve to play at participant observation, making notes and gathering data.

I found this grumble I’d written 11 years ago, as I followed links in the hypertext mentioned in the last post. Still find it relevant:

Innovation
at small liberal arts colleges
is all but dead
except for independently/externally funded efforts
and rogue actions.
Administrations have insulated themselves
behind a smokescreen of
‘strategic planning’
which privileges risk avoidance
in the name of ‘management’.
Add more deans,
institute performance reviews,
emphasize assessment of instructional objectives.
Distrust visionaries.
Reduce creativity and experimentation with unpredictable outcomes.
Recline upon past laurels.

Clay Shirky summarizes today’s situation eloquently in The End of Higher Education’s Golden Age. A few of the choicest bits:

Decades of rising revenue meant we could simultaneously become the research arm of government and industry, the training ground for a rapidly professionalizing workforce, and the preservers of the liberal arts tradition. Even better, we could do all of this while increasing faculty ranks and reducing the time senior professors spent in the classroom. This was the Golden Age of American academia.

…so long as college remained a source of cheap and effective job credentials, our new sources of support—students with loans, governments with research agendas—were happy to let us regard ourselves as priests instead of service workers.

…Over the decades, though, we’ve behaved like an embezzler who starts by taking only what he means to replace, but ends up extracting so much that embezzlement becomes the system. There is no longer enough income to support a full-time faculty and provide students a reasonably priced education of acceptable quality at most colleges or universities in this country.

…Of the twenty million or so students in the US, only about one in ten lives on a campus. The remaining eighteen million –the ones who don’t have the grades for Swarthmore, or tens of thousands of dollars in free cash flow, or four years free of adult responsibility– are relying on education after high school not as a voyage of self-discovery but as a way to acquire training and a certificate of hireability.

Oh but I was fortunate to be in when I was, and to exit when I did…

Sometimes what I write in the basically 1:1 medium of email needs to be saved where I can find it more easily, and/or seems like it might want to be shared more widely, so I contrive some way to nudge the text into the semi-public medium of the blog. A continuing series of exchanges loosely centered on writing is a current example, and so I’m following up my post on Writing with yesterday’s thoughts tending toward Reading. Don’t know that I’ll ever refine these thoughts, but if I ever want to, I’ll be able to find where I started.